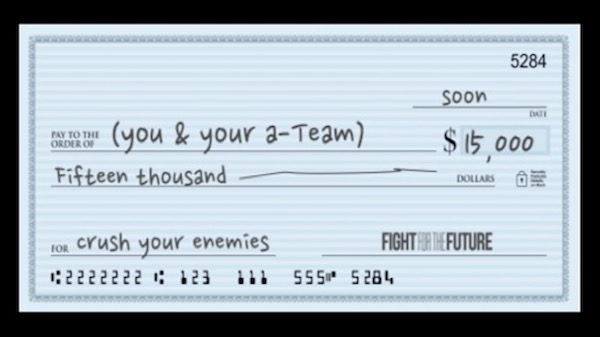 Unable to put America to work during the eight years of Barack Obama, now at least some part of the radical left is trying to infuse a little cash into the system. An organization called Fight For The Future is looking to pay an “A-Team” of anti-Trump foot soldiers up to $15k for the first month of working to “resist” the  President of the United States.

To start, we’re going to select some of the strongest teams for funding. So if you’ve got a 2-3 person A-Team and a target, you should apply. We’d potentially give you $15,000 for the first month, just to see what you can do.

The group paying these anti-Trump activists is called “Fight For The Future” a which until now organized online protests against things like Stop Online Piracy Act and PROTECT IP Act. Most recently it fought against the removal of net neutrality rules, with a “Day of Action to Save Net Neutrality.” And some of their other efforts have included #HugsforChelsea (Manning) and #PardonSnowden

But this is a major expansion of their efforts;

You can call Congress, or attend a protest. And you should. But is that it? Why stop there? Why set aside everything you’ve learned, everything you are, to be simply one more terrified person on a phone line, or marching in a street?

What if you did the following, as well?

Our goal: to convince you to take exactly these steps, give you a playbook, and then potentially fund you.

This is a proposal for defending the world. And it’s a good one. If you’re feeling like the world needs defending right now, keep reading.

Among the issues Fight for Freedom suggests for their A-Teams are:

And many more.  But before you quit your job to get the quick fifteen big ones, please note: they aren’t just giving out the money “A-Teams”  have to apply for it:

The plan is to describe the key ingredients for something we’re calling an Activism Team, or A-Team. First, we’ll tell you what that is. And then…

The plan is to convince you to start an A-Team, join one, or volunteer for one. And then…

The plan is to start dozens of A-Teams focused on issue areas where humanity faces serious political challenges or opportunities.
You, one team, many teams.

Then the plan is to help the best A-Teams find the support they need to do this full-time, going forward, for as long as it takes.

You probably have some questions! (…)

(…)Activism Teams, or A-Teams, are new, small, interdisciplinary teams focused on defending or improving some aspect of the world.

An A-Team is like a special ops team for activism, with all the skills needed to create political change.

A-Teams can write persuasively; speak with a strong voice online (with design, images, video, and code); size up their target’s internal power structures and weaknesses; and build strategies to rally the public, focusing collective action at the right pressure points, at the right time.

When you work in politics, it’s shocking how incomplete most political pushes are, even major ones.

Once you get the first month’s cash…that may be all she wrote:

If you are granted $15k, there’s no guarantee of further funding. That being said, we’d work with teams to develop a fundraising plan for what happens after that. If we find people who are awesome at this and they’re working on a primary issue like one of the ones we listed above, we’re hopeful that we can get them ongoing funding. There’s some risk we won’t be able to, but we think it’s more likely than not that we will.

Instead of paying groups to fight against the legitimately elected president of the United States, why doesn’t fight for the future advocate FOR something, even the issues they care about…rather than against people.  It is this attitude by the left-wing of the country that is splitting the population and feeding politicians like Chuck Schumer and Nancy Pelosi to dedicate their lives to “resistance” rather than legislating.

This organization isn’t Fighting for Future, they are fighting for divisiveness and political gridlock. But then again what do you expect from an organization at least partially funded by George Soros.