“If Joe Biden Cared One-Tenth A Much About Stopping The Deadly Infestation In Our Communities As President Trump Did, Hundreds Of American Families Would Not Be Mourning The Death Of Loved Ones Today.” 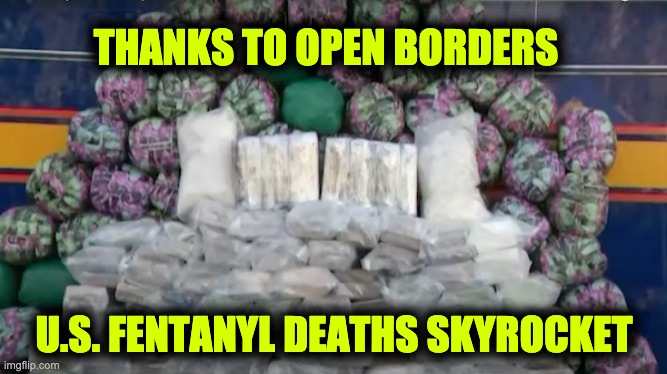 Both fentanyl seizures at the U.S.-Mexico border and fentanyl deaths in the country have skyrocketed since Joe Biden took office. In the first four months of this year, the Texas Department of Public Safety reported an 800 percent increase in the amount of fentanyl they apprehended coming across the border. U.S. Customs and Border patrol agents told KHOU TV in Houston that those 7,039 pounds of fentanyl are more than they intercepted at the border in the last three years combined.

Flowing in one direction, this fentanyl pipeline runs through Mexican cartel strongholds and heads north on well-established drug trafficking routes. It funnels 80 percent of the illegal Fenanyl through the San Diego border before dispersing throughout the U.S.

The federal law enforcement agencies report that much of the illegal drugs are produced in China and enter the U.S. through Mexico. And with Biden throwing away our immigration laws, ending the building of the border wall, and leaving the doors to the countrywide open, the Mexican drug cartels are working hand-in-hand with China to flood the country with murderous, unregulated doses of the dangerous drug.

Around the country cities and states are reporting an increase in fentanyl deaths. The Washington Post recently featured families who have lost loved ones as a result. The stories are heartbreaking.

Deena Loudon, 52, found her 21-year-old son, Matthew Loudon, and another friend in the downstairs of her Olney home, showing “classic overdose symptoms” on Election Day in November.

She said she had just spoken to Matthew about the dangers of fentanyl poisoning the day before. Matthew, whose family said he struggled with depression and anxiety, told her he had done all his research. The family tried to help him go to rehab for his use of pills, but Matthew wouldn’t go, Deena said.

He didn’t know he was taking a pill laced with fentanyl the day he died. The family now keeps a blanket of his ice hockey jerseys, Matthew’s passion, as a remembrance of his life.

“Matthew thought that he knew everything about what he was doing … he thought he could pick out a fake pill if he ever got one,” said Matthew’s older brother, Ryan Loudon, 27. “And, fact is, you don’t. You don’t always know.”

Deena Loudon said her son had taken up gardening and loved to cook. To keep the tradition going, the family built a greenhouse, growing tomatoes, peppers and herbs. They sit around the table as a family and talk about Matthew all the time, she said.

Loudon said it might sound cliche to describe finding her son dead as a “parent’s worst nightmare,” but the mother said it was exactly that.

“It’s the most horrible thing,” she said, “and I’ll never get that vision out of my head.”

According to the Post, police reports in Montgomery County, Maryland’s largest county, show that fatal opioid overdoses are up 33 percent, and nonfatal overdoses are up 57 percent this year as of the end of June, compared with the same period in 2020.

“It’s Russian roulette,” Patil said. “This is not experimental. This is life and death.”

“It rapidly became the drug of choice. As the demand increased, so did the overdose rates go up,” Robinson said. “The poison has been poisoned.”

Americans for Limited Government President Rick Manning said fentanyl deaths are on the rise in America as a direct of result of President Biden’s border policies and failure to truly get tough with the Chinese Communist Party regime.

“Over the four years of the Trump administration, President Trump confronted Chinese President Xi Jinping over his country’s dumping of fentanyl into America in an attempt to reenact the opium wars of the nineteenth century,” Manning explained.

“Trump gained an agreement from Xi to crack down on fentanyl producers in his country and through aggressive actions at U.S. ports, which interdicted the main entry point for fentanyl from China. Opioid deaths were on the decline.

“Now the injection of the deadly fentanyl into America’s bloodstream is on the rise as the Biden open-borders policy invites the deadly duo of the Chinese Communist Party and Mexican drug cartels to flood the southern border with this and other drugs.

“If Joe Biden cared one-tenth a much about stopping the deadly infestation in our communities as President Trump did, hundreds of American families would not be mourning the death of loved ones today.”

Trump cut down illegal immigration and human trafficking to a trickle while reducing significantly reducing the number of harmful drugs coming in through our southern border. But Biden and his team of leftists didn’t care.  Biden’s policy of opening the borders and inviting illegal aliens to “come on in” is a major cause of the rapes, torture, and deaths of unaccompanied minors and adults trying to sneak across the border with the help of organized crime cartels.

I think I’d take a mean Trump tweet any day of the week if it meant a return to tougher border policies. Biden’s open border crisis is literally killing Americans every day.