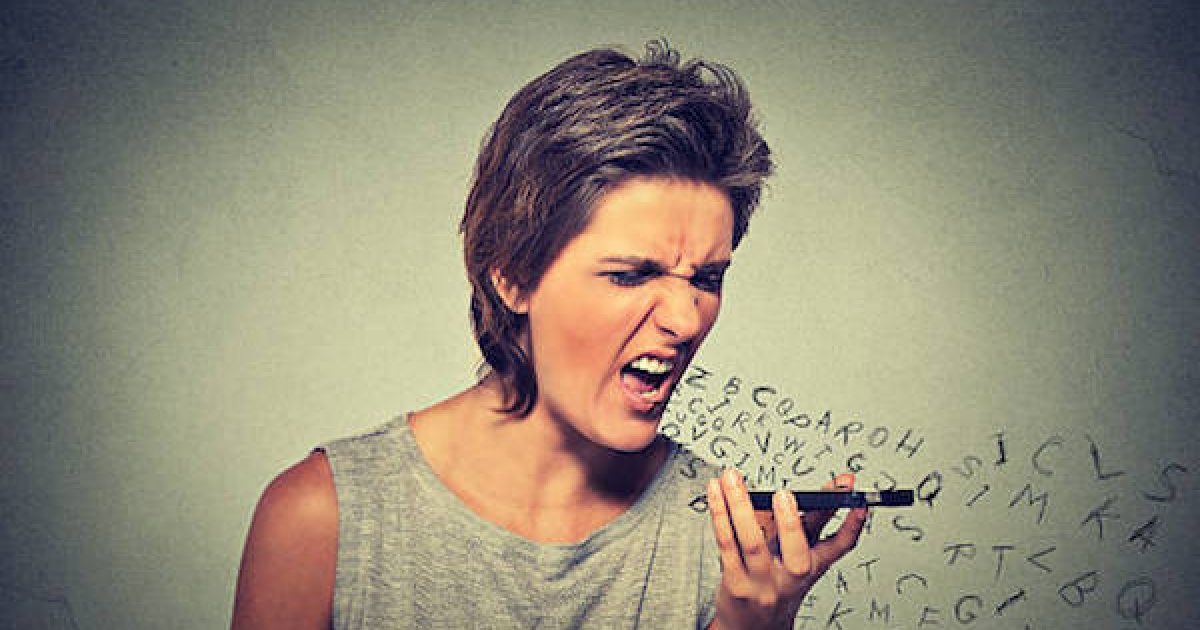 The feminist website EverydayFeminism.com has made itself a total laughing stock with a new list of ten questions feminists must ask potential lovers before going out with them and the list is just as bat sh*t insane as you could possibly imagine it to be.

Lara Witt, who calls herself an “intersectional feminist” (whatever the heck that is supposed to be) posted her list of ten questions that every feminist must ask before committing to an “allyship” (again, whatever the heck that is supposed to mean). The resulting questions prove that if this nonsense is what feminism has become, then real feminine issues have absolutely nothing at all to do with contemporary “feminism.”

Titled, “10 Things Every Intersectional Feminist Should Ask On a First Date,” Mz Witt showed that actual feminism is the last thing on her mind as she attacked America and capitalism, excoriated Israel, celebrated prostitution, and waxed poetic about domestic terrorism.

Even as she posted her absurd list, Witt seemed to instinctively understand how silly she looked. Before her list went wide, the feminist nutcase bravely preemptively blocked nearly every prominent conservative on social media so that she could avoid having to interact with them after her list went live, the Daily Wire reported.

After I read DW’s note about Witt’s preemptive blocking campaign, I soon discovered that she blocked me, too, even though I never heard of her until I saw this story. Her Twitter handle is @Femmefeministe in case you’d like to take a gander at her craziness… unless she already blocked you, too.

Before we get to this woman’s disgusting list one of her earlier tweets really reveals just what sort of person she is: 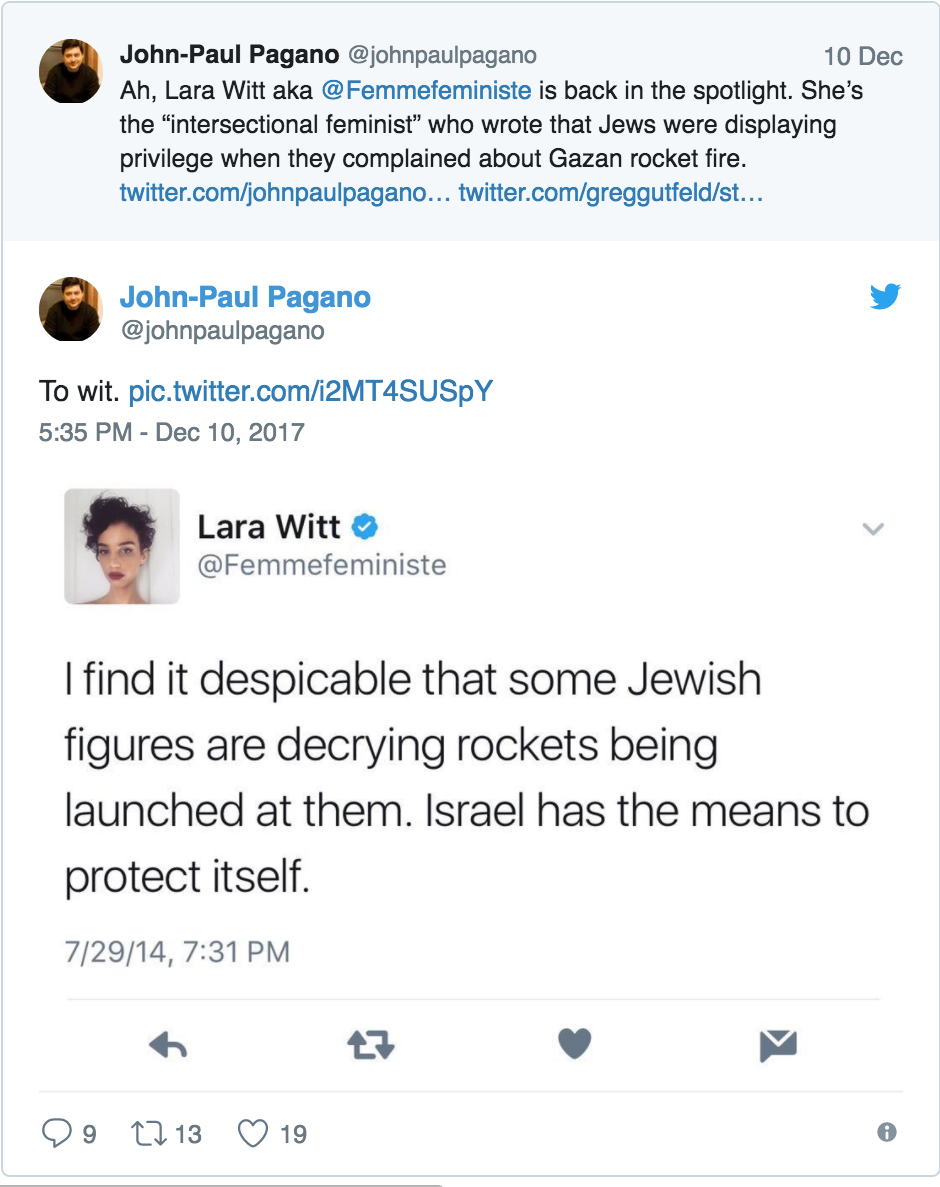 Yes, that is the kind of creep this Lara Witt is.

But, her list of ten questions is just as insane as you could imagine.

Her ten questions seem to prove that in Witt’s witless feminist world, you can’t be a feminist unless you support “marginalized people,” and that means it’s all about politics, not women.

“If you’re not going to support marginalized folks, then we can’t be friends, let alone date. The personal is political,” she said.

Or, as one Internet joker wrote, “This is the best how-to article I’ve read on how to die alone in your apartment surrounded by 30 cats.”

Witt prefaces her laugher of an article saying, “As a queer femme of color, I keep close relationships with people who go beyond allyship; they’re true accomplices in the fight against white supremacy, queerphobia, and misogyny. If you’re not going to support marginalized folks, then we can’t be friends, let alone date.”

“The personal is political,” she exclaims.

Her very first question would ask a potential lover if they support the domestic terror group Black Lives Matter. Witt says that no one who stands against Black Lives Matter will enter her life. And my guess is millions are thanking their lucky stars for it.

Question two tells potential mates that if they don’t support transgenderism, gays, the radical LGBT movement, and other so-called gender “choices,” then they should stay away from her. This, of course, has little to do with feminism. Feminism isn’t about men pretending to be women, or male homosexuals. Isn’t it supposed to be about women?

The third question seems to be the only question on the list that even remotely has anything to do with women. Question three asks, “How do you work to dismantle sexism and misogyny in your life?” OK, at least that one can be construed as a traditional, feminist issue. But despite the question, Witt’s explanation immediately veers into crazy townby starting out saying, “I’ve met cisgender heteronormative (cishet) men who hate women.” Sorry, but as soon as you start using idiotic, fantasy terms like “cisgender,” “heteronormative,” and “cishet” you have proven yourself to be a nutcase.

From there Witt comes to the support of prostitution (how is THAT “feminist”?), says that destroying Israel is a feminist position, insists that “colonialism” is anti-feminist, and says feminism must support illegal immigrants. None of this has anything to do with feminism, of course, but this is what Witt thinks equals feminism.

Question seven is particularly telling for the fact that her feminism is all about left-wing politics, not women’s issues. Apparently, Witt feels that being anti-capitalism is synomymous with being a feminist.

Anti-capitalism, especially in the U.S., is imperative if you have an understanding of systemic racism, the prison industrial complex, the 13th Amendment, and exploitation. Capitalism, for one, teaches us that we are only valuable if we produce capital. That means that if you aren’t contributing to the system with your labor, your life means almost nothing.

If your date says they’re anti-fascist and part of the resistance but they’re cool with exploiting labor from communities of color and they support the school to prison pipeline, then there’s a good chance they’ll only value you for your ability to nurture them without any reciprocation.

That isn’t feminism. It is communism.

Even worse, she claimed that Islam is essentially a feminist ideology. Yeah, the religion that treats women like chattel slaves, murders them if they date the wrong guy, stones them if THEY get raped, has rues for how much they can be beaten by their husbands, fathers, and brothers, and forces them to wear burkhas and hijabs or face a public beating… as far as Witt is concerned these are the tenets of a “feminist” ideology.

Her tenth question insists that feminists must date disabled people. I don’t even know what to say about that.

In all, Lara Witt’s list proves that feminism has become a joke. If these ideals are what lie at the heart of feminism, if this lunacy is “feminism,” then there isn’t anything left about women in feminism.