Orwell Was Correct, He Just Got The Year Wrong 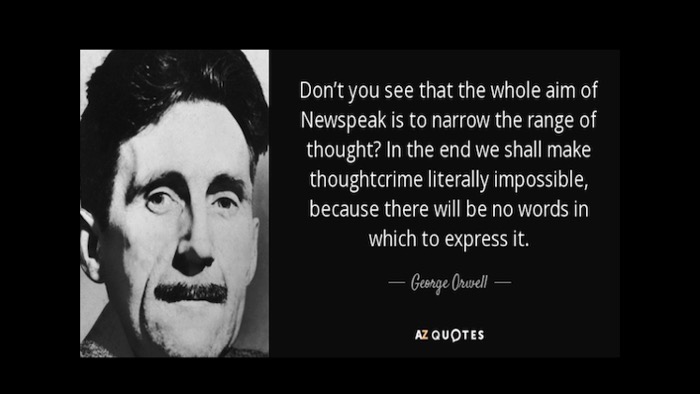 That Shakespeare quote tells an audience that appearances can be deceiving, something people should remember when understanding government programs. One thing government tries is if you change the words. Even after outside the government, it’s the liberal way. A taxpayer-funded program that pushes the racist Critical Race Theory (CRT) recently removed the words “critical race theory” from its materials to cover up the fact that the program is meant to push CRT.

If that isn’t a perfect example of the 1984 Newspeak that far-left governments push, what is? A federal grant for Research Institute for Scholars of Equity (RISE) was awarded to create a research program based on CRT approved five years ago and has been moving forward ever since. But now that CRT has been revealed to millions of Americans as a racist, anti-white, anti-American ideology, the program is suddenly looking for ways to fool people into thinking it isn’t really about what it is REALLY about!

Per Just The News:

The change suggests promoters of CRT are shying away from using the term as it becomes more politically charged. This summer, the U.S. Senate approved an amendment to the budget reconciliation bill that would ban federal funding for the teaching of CRT in schools.

A new sentence may be intended to surreptitiously refer to CRT: “During this institute, fellows study the sociocultural contexts of American schooling and learn how to formulate culturally competent research questions.”

The program has already received $2.6 million of taxpayer cash. And the money is used to pay students to get involved in the program. Students are paid nearly $7,000 to join the program.

Further, the program is really only open to black students.

Advertisements and flyers for the program going back to 2017 have all claimed that it was “Critical Race Theory” to describe its field of study. But now, as of 2021, suddenly, those words have been removed from descriptions and other materials.

Otherwise, the program has not changed at all.

So, essentially it is a lie. The program is still pushing the racist ideology, claiming that all Caucasians are oppressors and all African Americans are oppressed, is just pretending it is not.