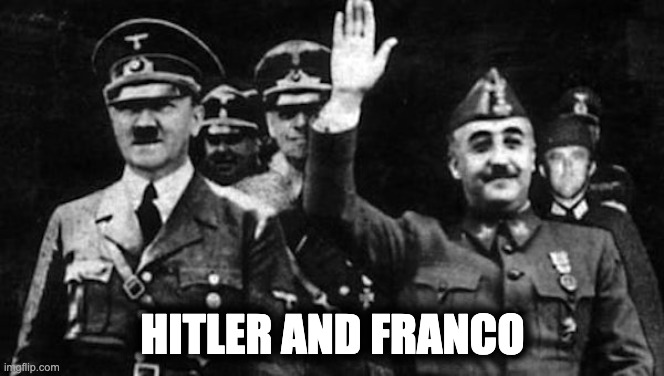 Facebook Twitter Flipboard
FDR plea to Hitler
According to newly uncovered documents, President Franklin D. Roosevelt sent a secret plea to Adolf Hitler in the summer of 1936. It wasn’t a plea to curtail Germany’s military buildup. It wasn’t a plea to Hitler to stop intervening on behalf of the fascists in the Spanish civil war. And it certainly wasn’t a protest against the brutal Nazi persecution of German Jews.
No, the issue that was so urgent to FDR that he sent a secret communication to Hitler was his request that the Führer meet with three American oil industry executives—two of them Roosevelt’s personal friends—who were on their way to Germany.
The documents about Roosevelt’s request came to light when they were recently put up for sale by a Maryland auction house. They begin with a “very urgent” message to Berlin from the German ambassador in Washington, Hans Luther, on August 21, 1936.
The ambassador reported that President Roosevelt had requested, through his senior aide Stephen Early, that Hitler grant an audience to Kenneth R. Kingsbury, president of Standard Oil of California; James A. Moffett, former head of FDR’s Federal Housing Administration and now vice president of Standard Oil of New Jersey; and Torkild Rieber, chairman of Texaco. “In view of Roosevelt’s personal interest,” Ambassador Luther wrote, “I very strongly recommend that his request should be granted.” In a second message a few days later, Luther reported that Early had again emphasized: “the great importance Roosevelt attaches to Moffett being introduced to the Führer.”
Ultimately, FDR’s request ran aground because of a scheduling conflict—the oil executives were going to be in Germany during one of the busiest periods in Hitler’s schedule, the preparations for the annual Nazi Party rally in Nuremberg. But that didn’t stop the three oil executives from engaging in significant commerce with the Third Reich.
Assistant Attorney General Thurman Arnold testified to a Senate committee in 1942 that at Hitler’s request, Standard Oil had obstructed the development of synthetic rubber in the United States and instead provided the rubber technology to the Nazis. The revelations were so damning that then-senator Harry Truman accused the oil company of “treason.”
For its part, Rieber’s Texaco sold oil to Nazi Germany and Franco’s fascists in Spain and had extensive dealings with Mussolini as well. At one point, the FBI questioned Rieber about his aid to Franco—which violated U.S. neutrality laws—but the Roosevelt administration let him off with a $22,000 fine. Embarrassing publicity over Rieber’s pro-Nazi leanings eventually led Texaco’s board of directors to force his resignation.
President Roosevelt’s plea to Hitler to meet with Kingsbury, Moffett, and Rieber sheds light on a question with which historians have long grappled: Why did President Roosevelt refuse to say a single word in public, from 1933 until late 1938, about Hitler’s anti-Jewish policies?
The answer is that any criticism of Hitler would have undermined Roosevelt’s policy of maintaining good diplomatic and economic relations with Nazi Germany. FDR is remembered for leading America toward military preparedness and, later, in the war against Germany—but in the 1930s, he pursued a very different policy toward the Nazis.
Thus, President Roosevelt allowed U.S. diplomats to attend the mass Nazi Party rally in Nuremberg in 1937. His administration helped the Nazis evade American Jewry’s boycott of German goods in the 1930s by permitting the Nazis to deceptively label their goods with the city or province of origin instead of “Made in Germany.” FDR also pressured Secretary of the Interior Harold Ickes to approve the sale of helium to power Germany’s Zeppelin airships (Ickes managed to obstruct the deal), and Roosevelt personally removed criticism of Nazi leaders from at least three of Ickes’ speeches in 1935 and 1938.
One of those speeches was a radio broadcast responding to the Kristallnacht pogrom in Germany in November 1938. Ickes wrote in his diary that White House aides who reviewed his draft informed him “that the President wanted us to cut out all references to Germany by name as well as references to Hitler, Goebbels, and others by name.” FDR’s own public statement criticizing the pogrom did not contain a single explicit mention of Hitler, Nazism, or even the Jews.
It was not that President Roosevelt felt any sympathy for the policies or ideology of the Nazi regime. On the contrary, he made numerous derisive comments about Hitler and Nazism in private conversations in the 1930s. But FDR considered the Nazi persecution of German Jews to be none of America’s concern.
The president who presented himself to the public as a humanitarian and a champion of the downtrodden went out of his way to maintain good diplomatic and economic ties with the world’s most brutal violator of human rights—even to the extent of using his office to try to facilitate contacts between his oil industry friends and the Nazi leadership.
Dr. Medoff is founding director of The David S. Wyman Institute for Holocaust Studies and author of more than 20 books about Jewish history and the Holocaust. His latest book, The Jews Should Keep Quiet: Franklin D. Roosevelt, Rabbi Stephen S. Wise, and the Holocaust is available on Amazon.
FDR plea to Hitler
FDR plea to Hitler
https://lidblog.com
Facebook Twitter Flipboard