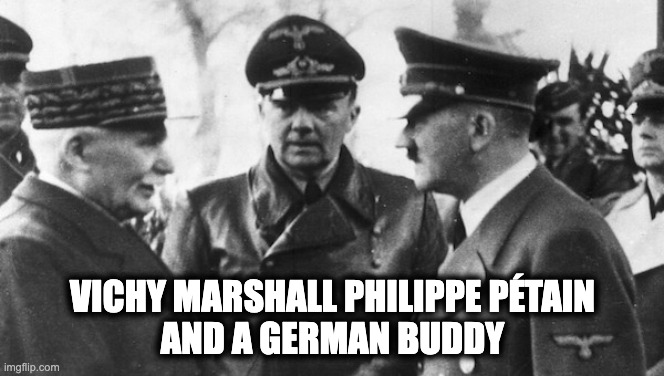 The 80th anniversary of this strange and long-forgotten episode, which took place just a few weeks after Pearl Harbor, sheds light on the curious streak of appeasement that sometimes infected the Roosevelt administration’s foreign policy.
“Appeasement” is a term that usually is associated with the policy pursued by England and France in the 1930s, when they repeatedly made concessions to Hitler in the naive belief that doing so would prevent a war.
The policy was manifest most notoriously in the autumn of 1938 when the British and French acquiesced in the dismemberment of Czechoslovakia in the name of “peace in our time.”
President Roosevelt was not directly involved in those negotiations, but he pressed both sides to keep the talks going and supported their outcome.
The Roosevelt administration’s support for appeasement was dramatized by the tragic story of Holocaust rescuer Varian Fry. In 1940, Fry, an American journalist, and editor traveled to southern France, which was then governed by the Nazi puppet regime headquartered at Vichy.
Fry organized an underground network that saved more than 2,000 refugee scientists, artists, and political dissidents, many of them Jews. Among the rescued were painter Marc Chagall, philosopher Hannah Arendt, author Franz Werfel, and Nobel Prize-winning scientist Otto Meyerhof.
When the Germans and Vichy French complained to Washington about Fry’s activities, Secretary of State Cordell Hull instructed the U.S. ambassador in Paris to inform Fry “that this Government can not, repeat not, countenance [him] carrying on activities evading the laws of countries with which the United States maintains friendly relations.” Fry refused to stop rescuing refugees; so the Roosevelt administration responded by canceling his passport, forcing him to leave France in 1941.
“A Nasty Little Incident”
Later that year came the curious case of St. Pierre and Miquelon, the two French islands off the coast of North America, situated between Nova Scotia and New Foundland, northeast of Maine. The two French colonial possessions had come under Vichy rule when the Nazis installed the puppet regime in 1940.
On December 24, 1941, the Free French—the government-in-exile headed by General Charles de Gaulle—sent a naval force that ousted the islands’ Vichyite rulers. A plebiscite held the following day found 98% of the islands’ inhabitants supported the overthrow of the Vichyites.
Rather than celebrate this small but symbolic victory over Axis occupiers in the Western hemisphere, the Roosevelt administration denounced De Gaulle’s “arbitrary” action and tried to convince the Canadian government to restore St. Pierre and Miquelon to Vichy’s control.
The “nasty little incident,” as Assistant Secretary of State Adolf Berle called it in his memoirs, threatened to upset the administration’s policy of tolerating Vichy rule over French colonies. Washington hoped its policy would persuade the Vichy to be less pro-Nazi. Like other attempts at appeasing dictators, it did not turn out as hoped.
The State Department castigated the liberating force as “the so-called Free French,” indicating that it regarded Vichy, not the resistance, as the legitimate rulers of the two islands.
Vichy officials praised the Roosevelt administration’s stance on the islands as “a severe lesson to the dissidents.” A group of prominent American liberal intellectuals, on the other hand, denounced the administration’s policy of “appeasing undemocratic and pro-Axis governments.”
Praise from fascists and denunciations by liberals created something of a public relations headache for FDR. Shaken by the rising tide of criticism, Secretary of State Cordell Hull implausibly claimed that his use of the term “so-called” referred not to the Free French but to the ships they had used. Pressed by reporters to elaborate on U.S. policy toward Vichy, Hull said he would not comment further because the matter “was too complicated.”
After months of floating rumors that the Free French would agree to leave St. Pierre and Miquelon, the Roosevelt administration finally dropped the issue when it became clear that neither De Gaulle nor the inhabitants of the islands were willing to surrender to Vichy.
Washington’s policy of appeasing Vichy, however, continued. After the Allies liberated North Africa from the Nazis in November 1942, President Roosevelt agreed to leave Vichyite Admiral Francois Darlan in power. That sparked a veritable uprising from FDR’s liberal supporters.
The New Republic protested that it “sticks in the craw of majorities of the British and French, and of democrats everywhere, [that] we are employing a French Quisling.” Treasury Secretary Henry Morgenthau said the Darlan deal “afflicts my soul.”
A delegation of American Jewish leaders met with senior U.S. officials in March 1943. They charged that “the anti-Jewish legacy of the Nazis remains intact in North Africa,” pointing to the fact that thousands of Jews were still languishing in slave labor camps under the continuing Vichyite rule. The camps continued operating until the summer of 1943, and anti-Jewish laws in North Africa were finally abolished only in October.
From the shutdown of Varian Fry’s rescue mission to the St. Pierre-Miquelon controversy to the Darlan deal, FDR’s policy of appeasing the Vichy French constituted a stain on America’s moral conscience and a deviation from the high ideals that the war against the Axis represented.
Jeff Note: Dr. Medoff is director of The David S. Wyman Institute for Holocaust Studies, in Washington, D.C.  www.WymanInstitute.org and the author of many books about the Holocaust. On a more personal level, Rafael Medoff is my “go-to” person to discover more information about the Shoah. Perhaps it’s because he is a “no holds barred” truth-teller.’
For your interest, the list of Lid articles below have used Dr. Medoff as a source, or was written by him. I suggest you give a few of them a read: