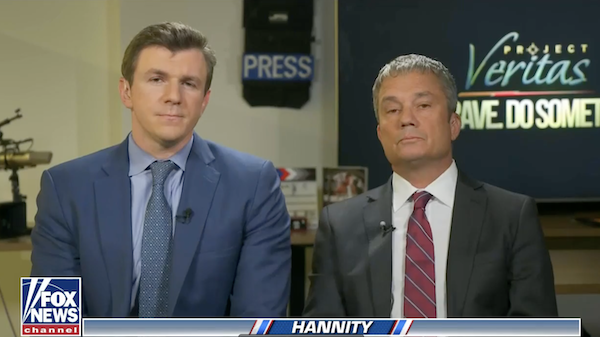 Even before Durham had finished exposing the Clinton-aligned frauds who leveraged law enforcement to kneecap Trump’s presidency, we see the same dynamic play out again. FBI NYT cooperated

Fast forward to the Biden administration. Far from keeping that pledge to be the ‘President of All Americans, ’ Joe is doubling down on the partisanship Pelosi & Co. showed during the Trump years.

Federal law enforcement seems to have been increasingly weaponized against enemies of the Democrat cause. This time, weaponization isn’t cooperation between the White House and the NSBA pushing to use anti-terror resources against concerned parents at School board meetings. It’s not blatant entrapment schemes like infiltrating a Bible Study and pressuring Christians to test Molotov Cocktails on abandoned Federal land or leading the alleged plot to kidnap Whitmer.

No, this time, we have an example of the FBI executing a predawn raid on the home of journalist James O’Keefe and seizing his private phone records, including privileged legal information and sources.

Are we to believe it’s a mere coincidence that the NY Times (who is in the middle of losing a defamation lawsuit to O’Keefe) had knowledge of the raid within minutes and *somehow* gained access to O’Keefe’s conversations with his lawyers?

Plausible Motive, NYT: Judge Ruled That O’Keefe And Project Veritas Could Proceed With Their Defamation Case.

O’Keefe previously filed a defamation lawsuit against the Times over a report published last year. In March, a New York judge denied the paper’s motion to dismiss the suit by the right-wing guerilla news outlet over the Times’ portrayal of Project Veritas’ reporting on alleged voter fraud in Minnesota’s 5th Congressional District, which is represented by U.S. Rep. Ilhan Omar, a Democrat.

“The facts submitted by Veritas could indicate more than standard, garden variety media bias and support a plausible inference of actual malice,” Supreme Court Justice Charles Wood ruled. “There is a substantial basis in law to proceed to permit the plaintiff to conduct discovery and to then attempt to meet its higher standard of proving liability through clear and convincing evidence of actual malice.” — FoxNews

Project Veritas has published several explosive videos showing all manner of corruption and deception being used by people and groups aligned with the Biden administration’s agendas. They have been a chronic thorn in their side, covering a variety of issues they care about.

The conservative group confirmed a New York Times report that the investigation involves allegations that a diary belonging to the president’s daughter had been stolen. Portions of the diary were published online by a conservative website about two weeks before the 2020 presidential election.

The Times, citing two sources briefed on the matter, reported that the Justice Department has been investigating the case since October 2020, when a representative of the Biden family said that several of Ashley Biden’s personal items had been stolen in a burglary. —NBC

According to that same NBC source, he had already cooperated with law enforcement and had made the ethical decision NOT to run a story of questionable providence.

“Late last year, we were approached by tipsters claiming they had a copy of Ashley Biden’s diary” and “the tipsters indicated that they were negotiating with a different media outlet for the payment of monies for the diary,” O’Keefe said.

He said they turned the diary over to law enforcement after an attorney for Ashley Biden refused to accept or authenticate it. —NBC

Evidence of Collusion Between Law Enforcement and The Corporate Media?

O’Keefe made a public statement in which he acknowledged receiving a letter regarding a Grand Jury subpoena. He was asked to keep it confidential but decided to produce an account on the topic for this reason demonstrating both the law-abiding nature of their operations and their willing cooperation with law enforcement.

After addressing the confidentiality considerations, here is what he said in reply (follow the link for the complete response).

But while the Department of Justice requested us to not disclose the existence of the subpoena, something very unusual happened. Within an hour of one of our reporters’ homes being secretly raided by the FBI, The New York Times, who we are currently suing for defamation, contacted the Project Veritas reporter for comment. We do not know how The New York Times was aware of the execution of a search warrant at our reporter’s home, or the subject matter of the search warrant, as a Grand Jury investigation is secret.

The FBI took materials of current, and former, Veritas journalists despite the fact that our legal team previously contacted the Department of Justice and voluntarily conveyed unassailable facts that demonstrate Project Veritas’ lack of involvement in criminal activity and/or criminal intent. Like any reporter, we regularly deal with the receipt of source information and take steps to verify its authenticity, legality, and newsworthiness. Our efforts were the stuff of responsible, ethical, journalism and we are in no doubt that Project Veritas acted properly at each and every step.

However, it appears journalism itself may now be on trial.

How Did The NYT Get Privileged Legal Information Of A Litigant Who Had Active Court Action Against Them?

The NY Times ran a hit piece against O’Keefe and Project Veritas that incorporated information that could ONLY have been gained by having access to his private communications with his legal counsel:

The documents, a series of memos written by the group’s lawyer, detail ways for Project Veritas sting operations — which typically diverge from standard journalistic practice by employing people who mask their real identities or create fake ones to infiltrate target organizations — to avoid breaking federal statutes such as the law against lying to government officials.

The documents show, for example, Project Veritas operatives’ concern that an operation launched in 2018 to secretly record employees at the F.B.I., Justice Department and other agencies in the hope of exposing bias against President Donald J. Trump might violate the Espionage Act — the law passed at the height of World War I that has typically been used to prosecute spies.

…The documents give new insight into the workings of the group at a time when it faces potential legal peril in the diary investigation — and has signaled that its defense will rely in part on casting itself as a journalistic organization protected by the First Amendment. — NYTimes

The obvious reason legal teams are called upon is that legal expertise keeps news organizations from making costly mistakes like, oh, I don’t know, defaming an innocent teenage boy in a red MAGA hat as a bigot.

Nobody questions having a trainer tell his player which ‘miracle supplements must be avoided at all costs because they would be disqualifying. It’s legal counsel’s job to have companies know where the lines are on the playing field so that people like Project Veritas don’t get a flag on the play.

A Judge Sided With O’Keefe, but the Damage Was Already Done

BREAKING! The federal court has just ordered the DOJ to STOP extracting data from our client, journalist James O’Keefe’s phone, and ordered a hearing. Counsel for Project Veritas asked the court to do this yesterday! pic.twitter.com/nBrmf4myuj

If The New York Times Already Has Been Given This Privileged Legal Information About Project Veritas… What Else Do They Have?

Has the NYTimes been given any information about the conversation O’Keefe has had with his lawyer about the defamation case he has against them?

And if so… was that information leaked to them by dirty cops who seized his information on a pretext as flimsy and politically-motivated as the FISA warrants issued against Trump?

I'm sorry, but this is worrying from a press freedom perspective—unless & until DOJ releases evidence Protect Veritas was directly involved in the theft. Because if there is none, then the raids could very well be a violation of the Privacy Protection Act. https://t.co/37iOywqwUm