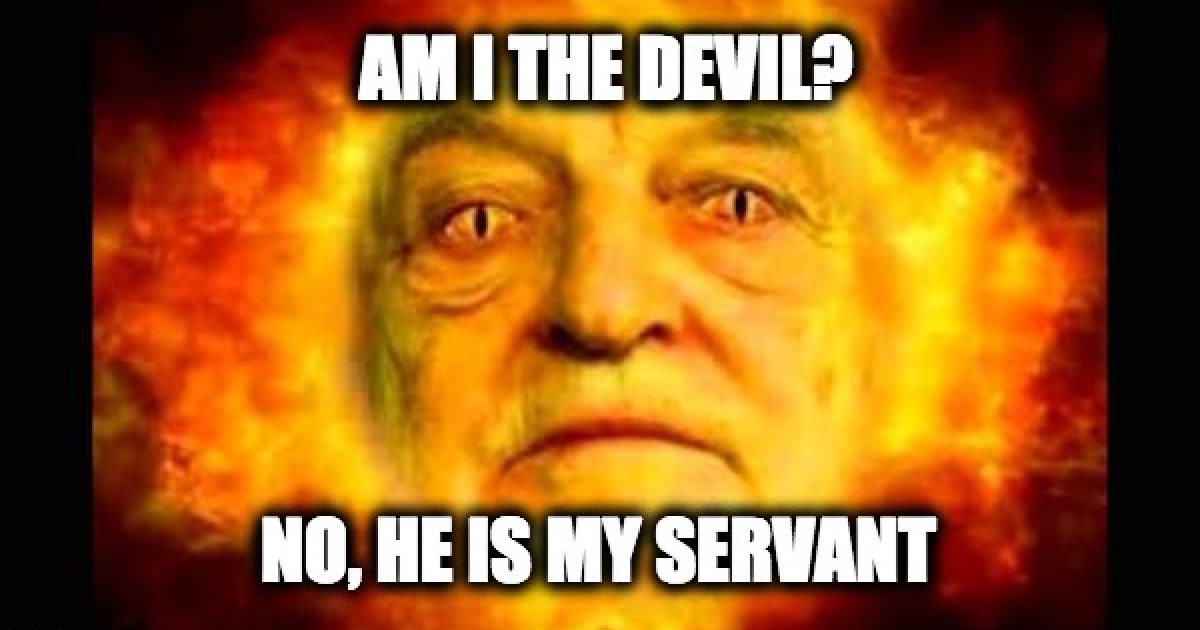 George Soros is a real-life Dr. Evil, the only difference is that he’s more dangerous and not as funny. He has disrupted Democracy and Capitalism across the world. And he might be involved in the anti-Judge Kavanaugh protests and the accusation of attempted rape three-plus decade ago.

The Democratic Party’s Progressive Puppet Master is often referred to as the “man who broke the bank of England” in the 1992 Sterling crisis. During that crisis, he made $1 billion in one day at the expense of British taxpayers and drove Britain into a recession as large numbers of businesses failed, and the housing market crashed.

At the time Soros was suspected of dealing based on inside information. The rumor then was that  Soros was acting on insider information obtained from the French central bank and the German Bundesbank. The insider information was that they would not support the British pound, despite a pre-existing arrangement to do so. Given that Mr. Soros is no fool, the British believe it is highly doubtful he would have made such a colossal bet without knowing with high certainty that the Germans would not reduce their interest rates.

In 2010 the financial market scuttlebutt was that the man who broke the Bank of England was at the center of a hedge fund plot to cash in on fall of the Euro.

Soros has practically been banned from Hungary and is persona-non-grata in much of Eastern Europe because he’s used his money to corrupt the political processes in more than a handful of foreign nations. As the 2018 election period in Hungry started,  the government used vast amounts of large public posters with the photo of Soros, along with continuous support from government-owned countrywide media to create fear and anger in the general public towards Soros, using statements as “Soros wants millions of migrants to live in Hungary”, and “Soros wants to dismantle the border fence”.

In 2017 the right-wing government of Macedonia declared war on Soros as the financier and his minions in USAID (money allocated under Obama)   financed a left-wing agenda to divide the nation and bring a socialist-Muslim coalition to power. Early March of that year saw tens of thousands of Macedonians holding peaceful rallies for national unity, an end to chaos-creating Soros/USAID largess, and the removal of the U.S. Ambassador. One of the most common posters says, “No Soros Government.”

He once commented that “the main obstacle to a stable and just world order is the United States.”

And he puts his money where his mouth is. When there is a major left-wing protest or movement here in the United States generally Soros, or one of his organizations is funding it. For example, his Open Society Foundations helped to support groups involved in the Ferguson protests. That’s the way he does it, one can’t say that Soros gives money to…it is an organization that Soros founded and/or gives money to funded the protest group. A report by the Media Research Center found Mr. Soros and his Open Society Foundations contributed $246 million between 2010 and 2014 to 100 of the 544 groups listed as partners of the pink pussy hat Women’s March. The connection isn’t direct, but it is there.

Apparently, that’s how Soros is connected with the Judge Kavanaugh nonsense. The Daily Caller reported back in June:

A new political advocacy group that vowed to put $5 million behind an effort to stop Judge Brett Kavanaugh’s confirmation to the U.S. Supreme Court has significant ties to the liberal financier George Soros.

A Daily Caller News Foundation review has found that the group’s primary financial supporter is a nonprofit to whom Soros has given millions.

The group, Demand Justice (DJ), is organized and financed by a 501(c)(4) called the Sixteen Thirty Fund, which collected some $2.2 million in contributions from the Open Society Policy Center (OSPC), one of Soros’ primary donation vehicles, between 2012 and 2016.

My colleague J.E. Dyer who blogs at Liberty Unyielding pointed out that the Lawyer For Kavanaugh’s accuser helps run a George Soros organization:

Daniel Greenfield reported on Monday at FrontPage that the lawyer for Christine Blasey Ford, accuser of Supreme Court nominee Brett Kavanaugh, is the vice chair of the board of directors for the Project on Government Oversight (POGO), a Soros-funded “watchdog” group.

Greenfield links to a letter POGO sent to the Senate in August “demanding Kavanaugh records.”  It seems like a hundred years ago, but that was the big scandal the Democrats and media were trying to create at the time (in reality, three weeks ago): a false impression that “Kavanaugh records” were being insufficiently disclosed.

The Daily Caller also reported that George Soros funded groups helped to support the anti-Kavanaugh protests that were disrupting the Kavanaugh confirmation hearings:

A coalition of activist organizations including Women’s March, the Center for Popular Democracy (CPD) and Housing Works have scheduled the near-constant disruptions at the Kavanaugh hearings as part of an organized effort to derail the confirmation process in a series of meetings since he was first nominated.

The cash from the donor-funded groups goes toward the protesters’ post-and-forfeit payments — a small cash sum paid to resolve low-level misdemeanor crimes and avoid jail time.

Those are just some of the details representatives from the three groups revealed in a Monday night conference call planning their next two anti-Kavanaugh protests, one on Thursday and one next Monday.

Is funding people to break the law at Senate hearings illegal? If Soros money helped to fund the Woman’s March where people were arrested, is that legal? If it turns out that Christine Blasey Ford is lying (and I believe she is) and her attorney knows it, and she was encouraged to do the deed by her friend George Soros is that legal? To be honest none of this has been proven, but it seems that this deserves an FBI investigation more than the Feinstein demanded investigation of Kavanaugh. And MUCH more than the investigation of Carter Page that started the whole Russian collusion investigation.