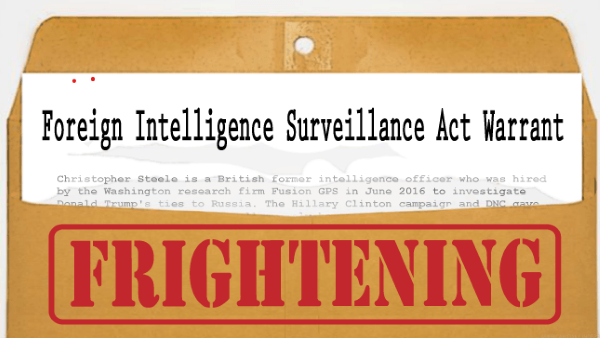 After he found significant issues with the FBI’s Carter Page FISA warrants, Inspector General Michael Horowitz conducted a test to determine how rampant the problems with FBI FISA warrants were–and it wasn’t pretty. He took a sample of 29 FISA warrant applications to review – and found issues with all of them. In 25 applications, Horowitz’s team found “apparent errors or inadequately supported facts,” while in four of the cases, they were unable to find any Woods file at all. In three of those missing supporting documentation, it’s unclear if a Woods file was ever created. In other words, along with the CoronaVirus, Americans need to be afraid of losing their rights.

What is a Woods File?

Per Horowitz FBI policy requires the case agent who will be requesting the FISA application to create and maintain an accuracy sub-file (known as a “Woods File”) that contains: (1) supporting documentation for every factual assertion contained in a FISA application, and (2) supporting documentation and the results of required database searches and other verifications. Following the creation of the Woods File, the case agent signs the “FD-1079 FISA Verification Form” (Woods Form) to affirm “the accuracy of each and every factual assertion… and that back-up documentation for each such fact has been retained” in the Woods File. The supervisory special agent is also required to sign the form, confirming that the supervisory special agent has reviewed the Woods File and determined that it contains supporting documentation for every factual assertion within the FISA application. This form must be completed prior to an application being submitted to the FISC. The Woods File is meant to protect people from being unfailrly investigated.

What Did Horowitz Find

Per his summary report (embedded below)

Our concerns are supported by the fact that in four instances the FBI could not produce the original Woods File, that the Woods File deficiencies that we identified spanned all eight field offices in which we performed fieldwork, that case agents or supervisors whom we interviewed generally did not contest our results, and that the FBI CDC and NSD OI accuracy reviews conducted for the same period of our review identified similar deficiencies. As a result, we do not have confidence that the FBI has executed its Woods Procedures in compliance with FBI policy, or that the process is working as it was intended to help achieve the “scrupulously accurate” standard for FISA applications.

Horowitz included an FBI response to his report within the document. Associate Deputy Director Paul Abbate wrote in the response, “We believe that the process errors identified in the OIG’s preliminary findings will be addressed by Director Wray’s previously ordered corrective actions.”

But Mr. Abbate, the American public believed the FBI was following the Woods procedures, somehow I find it difficult to believe Director Wray’s corrective actions will be followed.

Congress started working on revising the FISA act, but as of yet, haven’t completed adding new protections for the American Public.

Read the Full Horowitz interim report below and be very frightened.

Horowitz report of FISA by Jeff Dunetz on Scribd