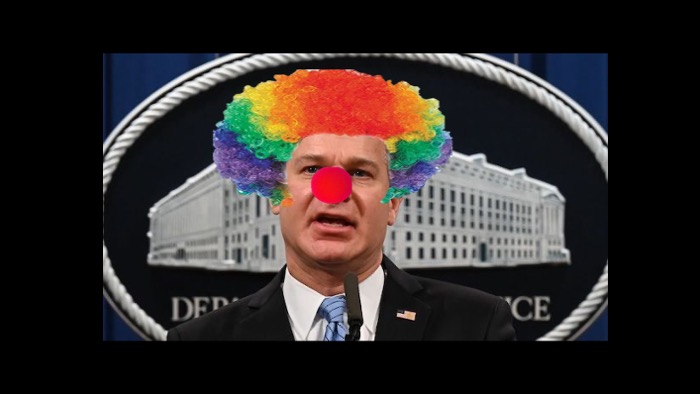 FBI Director Wray stood up and called threats against FBI agents absolutely unacceptable, and they are.  But why is the DOJ not as worked up about threats against citizens?

Long before the current administration was even sworn in, they made their views on law enforcement abundantly clear. Helping bail out violent protesters who had injured hundreds of police during riots was an unmistakable clue.

Alright, we get it. The rule of law isn’t exactly a priority for these clods.

But what happens when they can hide behind our nation’s instinctual ‘respect of an institution’ to deflect the fact that said institution had been weaponized against a political rival?

They roll out the injured bird trick. This was Wray, as reported on August 11th, just after the Mar-a-Lago raid.

Christopher Wray, who was appointed as the FBI’s director in 2017, said ‘violence’ against the FBI and the Department of Justice employees is ‘not the answer’.

‘I am always concerned about threats to law enforcement,’ Wray said on Wednesday. ‘Violence against law enforcement is not the answer, no matter who you’re upset with.’ –DailyMail

They’re pretty concerned about violence, are they? Hold that thought.

A New York City man has been let off twice by federal prosecutors after he threatened numerous Fox News hosts, despite breaking an agreement drafted after his first encounter with prosecutors.

In 2021, Jeffrey Rodriguez of New York City was arrested and charged with cyberstalking and threatening interstate communications after sending hundreds of vile messages to numerous Fox News hosts

He was given a pass under the condition that he adhered to a number of guidelines. However, after breaking them, his prosecution was deferred yet again. –PostMillenial

We needn’t wonder. It’s in the reporting.

The complaint against him states that “the rate of his posts, comments, and direct messages directed toward Broadcasters – 2 and – 3, as well as the severity of his threats, increased drastically” in the months following his initial arrest.

Rodriguez repeatedly threatened the hosts, whom he referred to as “Nazis,” saying he wanted to “skin [them] ALIVE.” He told one he would “split [their] top.”

From March 2020 to December 2021, Rodriguez allegedly sent hundreds of menacing messages and posts to the broadcasters, and allegedly threatened two of their families and exposed information about where they live. — PostMillenial

Should we blow that off as an isolated incident? No, we shouldn’t.

They have tipped their hand as being political since Biden took office.

Parents upset about 14yo daughters being sodomized in the girls’ bathroom at school were labeled terrorists while activists harassing sitting members of SCOTUS — even after someone was ARRESTED while on his way to assassinate one of them — were given a pass.

Did we happen to mention it’s a FELONY to protest a justice at his place of residence?

Don’t worry. They’re not bothering any of the Justices nominated by Democrat Presidents, so everything’s A-OK by them.

A whole crop of the clowns Biden nominated needs to be impeached… yesterday.