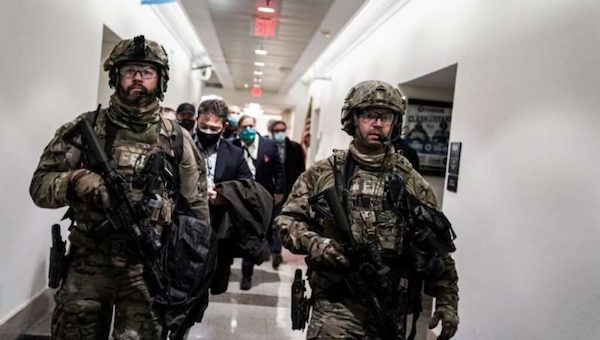 This throws a wrench in that Trump spontaneously whipped that crowd into a frenzy and incited a riot narrative, doesn’t it? FBI commando squad

The events of January 6th — however you might characterize them — were either planned or spontaneous. They could not have been both.

We now know that the FBI had been given information that certain agitators might come looking to start trouble in and among the crowd that day, and we are told that the FBI field office did not get any of those tips until after the events of the day.

Keep that claim in mind as we cover what Newsweek had now discovered about FBI preparations being put in place on the days before some small portion of the Stop The Steal rally devolved into a riot.

Also, keep in mind that Trump had offered to make thousands of National Guard troops available to bolster security for the day — which is hardly something that would happen if he was hoping to see the Capitol breeched, like Nancy Pelosi, Liz Cheney, and Adam Kinsinger would claim.

In the first days of the New Year, Acting Attorney General Rosen made a unilateral decision to execute a long-standing protocol to defend the President and Vice President against particular security threats… these protocols included shoot-to-kill authority if they were required.

This team is separate from anything you might see in the videos, failing to secure the building from the pressing crowds that everyone knew might be coming. That failure is likely to be laid at the feet of a different set of decision-makers. (Looking at you, Pelosi!)

But this team was, nonetheless, kicked into operation.

“I believe that DOJ [Department of Justice] reasonably prepared for contingencies ahead of January 6, understanding that there was considerable uncertainty as to how many people would arrive, who those people would be, and precisely what purposes they would pursue,” Rosen later told Congress. He stressed that his department “no frontline role with respect to crowd control,” that they were focused on “high-risk” operations.

All of these assets were “pre-deployed” and ready to go over the weekend of January 2-3, staging out of the FBI Academy complex in Quantico, 30 miles south of the Capitol building. If a WMD or terrorist attack occurred, the units were to move via helicopter to the site of the incident. The activation of the catastrophic response units, operating under plans already approved by President Trump, entailed an automatic green light allowing federal responders to take the initiative and spare no resources, including shoot-to-kill authority, to deal with this most extraordinary condition.

The article described the history of the development, including their central role in responding to Domestic Terror threats up to and including responding to unthinkable situations like what happens next if we were to fumble the Nuclear Football.

On the morning of January 6, most of these forces staged closer to downtown Washington, particularly after intelligence was received indicating a possible threat to FBI headquarters building or the FBI’s Washington Field Office. FBI tactical teams arrived on Capitol Hill early in the day to assist in the collection of evidence at sites—including the Republican and Democrat party national headquarters—where explosive devices were found. FBI SWAT teams and snipers were deployed to secure nearby congressional office buildings. Other FBI agents provided selective security around the U.S. Capitol and protection to congressional members and staff.

A tactical team of the Hostage Rescue Team was one of the first external federal agencies to actually enter the Capitol after protestors breached the building. In addition to augmentation of emergency security assets, one team coordinated with the U.S. Capitol Police and Secret Service to provide additional safeguarding of Vice President Pence, who had been moved to the underground parking structure beneath the Capitol, from where he was supposed to evacuate. But Pence refused to leave the building and stayed underground instead.

They correctly ask what caused this federal agency to respond to this event with greater seriousness and far greater readiness than any of the other agencies did.

If they saw something, they should have said something — to the people and agencies responsible for Capitol Hill security. And perhaps they did.

That’s the kind of question a serious inquiry into the events would be looking into, rather than just subpoenaing all of the phone records of their political opponents and running roughshod over the Fourth and Fifth amendments.

Suppose they had already deployed in the morning. How are Democrats claiming Trump ‘instigated’ it — especially when we have multiple images of someone being identified as Ray Epps who was trying to plant the idea of storming the Capitol Building into the crowd and whispered something to the first guy to break through the barricades — at the defenders’ most vulnerable possible moment — less than one minute after the bomb was discovered elsewhere on the grounds.

Out of all of the thousands of January 6’s protesters, and the thousands of hours of publicly available footage from that fateful day, Ray Epps has turned out to be perhaps the only person nailed dead to rights confessing on camera to plotting a pre-planned attack on the Capitol. On both January 5 and January 6, Epps announced multiple times, at multiple locations, his upcoming plot to breach the US Capitol. He then spent hours attempting to recruit hundreds of others to join him. On top of it all, Epps was seen leading key people and managing key aspects of the initial breach of the Capitol grounds himself. —RevolverNews

What’s really going on here? Why are grandmothers being arrested and having their lives ruined for glorified trespassing while journalists and internet sleuths are doing a better job at finding the actual instigators?

There’s clearly a huge gap between the talking points and the known facts about the events of January 6th. This Newsweek bombshell is just one more piece of the puzzle.