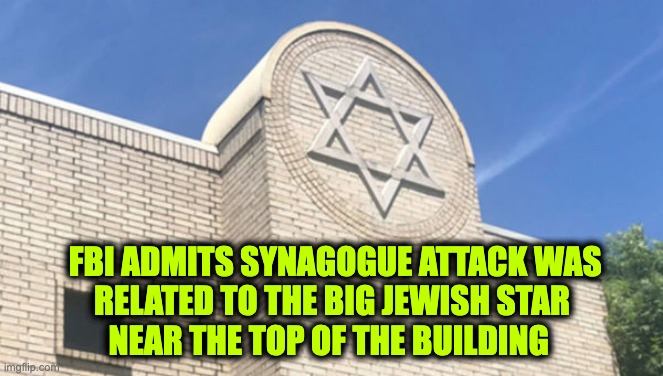 According to the FBI on Saturday night, an Islamic terrorist/anti-Semite who was trying to get a terrorist (who is also a vocal anti-Semite freed from jail. So he breaks into a Synagogue during Shabbat services (the most well-attended service of the week). There he holds four people hostage, including their Rabbi. But according to the FBI, it had nothing to do with anti-Semitic terrorism. Gee whiz, I’ll smoke what they’re smoking.

If you want “transparency,” you won’t get it from the FBI. Those held hostage by a “Middle Eastern man” in Saturday’s Texas synagogue hostage situation in Colleyville knew the truth: the incident was a targeted attack on the Jewish community by anti-semite Malik Faisal Akram. But the FBI’s original statement said that it was “not specifically related to the Jewish community.” Severe backlash ensued, so late Sunday, the FBI backtracked and admitted it was anti-Semitic terrorism.

In the original stories describing the Texas synagogue incident, it was thought that the FBI’s Hostage Rescue Unit saved the hostages. Now we learn that the Rabbi threw a chair at the hostage-taker and told the others to run. Akram ran after them, but he stopped and backed up when he saw the armed men outside. Then the agents breached the door, and gunshots could be heard. The credit for saving the hostages belongs to the Rabbi.

“I made sure that the two gentlemen who were still with me were ready to go – the exit wasn’t too far away – I told them to go, I threw a chair at the gunman, and I headed for the door.

Akram was banned from a Lancaster Court in 2001 “for threatening and abusing staff and allegedly telling a court usher that he wished the usher had died on one of the 9/11 planes., according to the Jerusalem Post. Menace? Ya think? “Akram denied the allegations against him, a letter sent to him by then-deputy justice clerk Peter Wells called Akram a menace and detailed his abuse of court staff and especially quoted him telling the court usher, “You should have been on the F***ing plane.” What it didn’t say was why didn’t he spend even one day in jail?

Back in Blackburn, UK, two teens were detained regarding the terror investigation after the FBI said there was “no indication” of anyone else being involved. That the same federal agency that claimed it had nothing to do with Antisemitism

Akram allegedly flew to the US two weeks ago, lived in homeless shelters and bought a gun on the street.

The FBI also initially said there was ‘no indication’ that anyone else was involved in the siege, but two teenagers were arrested over the incident by anti-terror office updates available in Manchester, England, last night.

He demanded the release of jailed female terrorist Siddiqu – known as Lady Al Qaeda, referring to her as his ‘sister’ but the pair are not related.

When Malik Faisal Akram referred to Siddiqui as his “sister,” it was a reference to terrorist connections. The Daily Mail reported that the two are not related (which must have been celebrated by his brother Gulbar and the rest of his family).

Even Biden said it was “an act of terror” (after someone reminded him what an act of terror means). His comment was hours before the FBI admitted it. The backlash against the FBI statement was intense. They were so intent on hiding their actions in all investigations that it took a massive backlash to get them to change course.

Even Lindsey Graham hit back at the FBI over the Texas synagogue attack:

Makes you wonder why they put out that first ridiculous statement #Colleyville https://t.co/b0olT4IXMT

Cameron, perhaps they messed up because they were still too busy trying to find a connection between Trump and Russia.

The FBI implied that the terrorist at Colleyville *randomly* chose a synagogue — could equally have been a church, mall, or Chuck E. Cheese.

The Dallas-Fort Worth metro has 7.6 million people. About 1% of it is Jewish.

Such a dangerous misunderstanding of antisemitism. https://t.co/OEXJykCvG0

Abe Chuck E. Cheese is not Halal. Maybe THAT’S why the FBI’s initial analysis was so wrong.

An instinctive reaction to the #Colleyville siege was for the Blackburn Muslim Community FB page to express the hope Malik Faisal Akram – a terrorist – will enter paradise. The polish of today’s retraction should not erase concerns about their judgement, or possible worldview. pic.twitter.com/iS5H4IT0th

Or as my friend, the Elder of Zion pointed out:

Pretending that #Colleyville was a random attack is not only stupid but STRATEGICALLY stupid.

It doesn't deter jihadists, it doesn't make Jews any safer. It HURTS efforts to actually identify and fight jihadist terrorism.

IT WASN'T RANDOM. IT WAS ISLAMIC ANTISEMITISM. pic.twitter.com/lUfo5KCYQN

THANKS TO DECADES OF POLITICAL INFLUENCE. The FBI is corrupt and deeply flawed. What to do about it? That comes from the top Merrick Garland, and all he cares about is arresting parents.