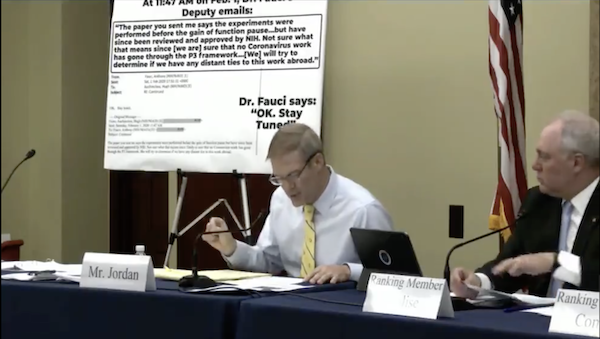 The big question in so many scandals is ‘what did you know, and when did you know it? With the FOIA requests on these emails, we have an answer to that question.  Fauci withheld COVID details

Jim Jordan uses Fauci’s emails to connect the dots, and the picture they are painting is a damning one. The time frame Jim is describing here begins on January 31, 2020, when the world was still barely seeing the leading edge of the storm that was to follow.

Here’s what Dr. Fauci knew within 13 hours of receiving an email suggesting a gain of function connection to the Coronavirus…

1) Dr. Fauci knew there was a lethal virus on the loose that began in Wuhan, China.
2) He knows the American taxpayers have funded gain-of-function research in Wuhan, China.
3) He knows that the research grant didn’t go through the required oversight board.
4) He knows the virus, quote, ‘looks engineered’ and quote, ‘not consistent with evolutionary theory.’
5) He knows he may have ties to this work in China… his fingerprints, in fact, might be on this.

What was his immediate response? When he got the email, Fauci organized a conference call for later that same day… but he did NOT send it to his various American governmental counterparts who would be heading up the Coronavirus response. He contacted virologists from around the world. Fauci was the ONLY person from the government on this urgent call. We do not explicitly know what happened on that call, but we know what happened 4 days later.

Four days later, the same guy who wrote in an email to Fauci that the virus ‘looked engineered’ sent another email saying something quite different, ‘The crackpot theories going around at the moment relate to this virus being somehow engineered. That is demonstrably false.’

In four days, he went from saying this looks engineered to claiming that anyone who says what he himself said less than a week before was a ‘crackpot.’ Ok, then.

That same Mr. Anderson and several other people on that conference call wrote an article a few weeks later that says ‘COVID is not a laboratory construct.’

Fauci is even offered a chance to edit this article before it was published. When it was published, Dr. Fauci cites it at a White House press conference when he is asked by a reporter about the origin of the virus. He cites the very article he put in motion on the conference call, and he was allowed to edit.

As he wrapped up, Jordan added:

At the White House, where he is supposed to be giving the American people the truth, he references an article that he manufactured.

…I’m convinced these guys knew right from the get-go what the truth was, and they misled the American people.

Then he held up a ream of pages that were almost entirely blacked out with redactions and told us that they were the emails regarding that conference call on February 2, involving all the guys mentioned previously. Every single thing about what took place on that conference call is redacted.

Who are those redactions protecting?

It isn’t hard to guess… but it sure doesn’t look like they are protecting the interests of the American public.