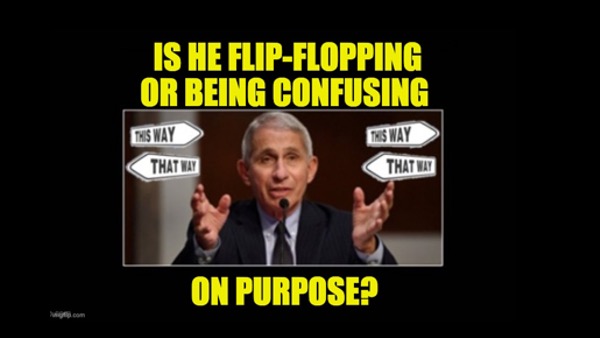 Does Dr. Fauci not realize that his mixed and confusing messages are a significant contributor to vaccine hesitancy? Media darling Dr. Anthony Fauci whose words are treated as if they were scripture handed down from heaven, made the rounds on the Sunday shows — ABC, CNN, MSNBC, and NBC. The purpose of the interviews was to promote the safety and efficacy of vaccinations, but as he did so, he was undermining his own efforts. Fauci Sunday news program

All of the appearances discussed the Johnson & Johnson vaccine and the blood clot issue, why it was paused, and if it will be resumed. Fauci downplayed the risk because it’s extremely low, says that they may change who they recommend gets that particular jab, and says that he expects a decision will be made on J&J by Friday.

But he said all sorts of other weird and contradictory things and, on several shows, addressed his exchange with Rep. Jim Jordan last week.

On Meet the Press, Fauci tells Chuck Todd at around the 4-minute mark that people don’t “appreciate what relative risk is” and then undercuts that by ignoring the relative risk and saying that masks are still required before vaccination. Also, during that appearance, the greatest of the Leftist Saints, Dr. Fauci, Peace Be Upon Him, said that it is necessary to continue wearing masks even after being fully vaccinated.

“[W]hat happens is that you might get infected and get absolutely no symptoms, not know you’re infected, and then inadvertently go into a situation with vulnerable people. And if you don’t have a mask, you might inadvertently infect them,” he said, adding that there was a “small risk” of such a situation occurring.

“[W]hen you get vaccinated you are clearly diminishing dramatically your risk of getting infected. That’s one of the things we’ve got to make sure everybody understands. You dramatically diminish it,” Fauci added.

So does the great medical hero want us to wear masks for the rest of our lives?

WATCH: @chucktodd: "Why does a vaccinated person have to wear a mask?"

"If you don't have a mask, you might inadvertently infect" those around you. pic.twitter.com/AJvEvQIdb4

While almost all of the news stories you’ll read will say the same thing — that masks are necessary post-vaccine until enough of the population is vaccinated, there’s quite a bit of hedging in those articles. Yes, you can still contract the virus after being vaccinated, but it’s an infinitesimally small chance. The Pfizer and Moderna vaccines are 95% effective after 14 days of the second dose, even against the B.1.1.7, also known as the British variant of the virus that originated in Wuhan, China.

In a Popular Science article about the low risk of contracting COVID post-vaccine, after encouraging continued mask-wearing and social distancing, the article states, “It’s also important to know that, so far, vaccinated people who do get infected tend to only have mild or even asymptomatic cases of COVID-19, and don’t require hospitalization.”

Fear has so gripped some people that even post-vaccine, they’re terrified of COVID. It’s so bad that HuffPo has some tips on how to “get reacclimated to life” post-vaccine.

A study from Israel shows a significant decline in COVID infection post-vaccination, precisely the point of a vaccine.

Data analysis in a study by the Israeli Health Ministry and Pfizer Inc found the Pfizer vaccine developed with Germany’s BioNTech reduces infection, including in asymptomatic cases, by 89.4% and in syptomatic cases by 93.7%.

Findings of the pre-published study, not yet peer-reviewed, but based on a national database that is one of the world’s most advanced, were first reported by the Israeli news site Ynet late on Thursday and were obtained by Reuters on Friday…

…A separate study by Israel’s Sheba Medical Center published on Friday in The Lancet medical journal found that among 7,214 hospital staff who received their first dose in January, there was an 85% reduction in symptomatic COVID-19 within 15 to 28 days with an overall reduction of infections, including asymptomatic cases detected by testing, of 75%.

As though channeling the holy flip-flopping Fauci, Oregon lawmakers are  considering a proposal to make masks “permanent, while many jurisdictions are ditching mask mandates, With the mandatory expiration dates on emergency measures, lawmakers must continue to extend them, but the new rule would make the Fauci-endorsed “mitigation measures” like mask mandates and social distancing until they are “no longer necessary to address the effects of the pandemic in the workplace.”

Note: Nancy Pelosi and Chuck Schumer should be forced to wear masks permanently. Every time I see the face of one of them, I get ill and have nightmares about someone taking all my money and my freedom.

On Sunday, Fauci showed up on CNN’s State of the Union for another interview and said that there are still restrictions because of the chance of asymptomatic spread after vaccination. What happened to all the talk about “relative risk”?

But hundreds of millions of people have been vaccinated and there’s not even one proven incident of that happening pic.twitter.com/IIsI9j2KGt

NEW – Dr. Fauci: "It's almost paradoxical, that on the one hand, they (Republicans) want to be relieved of the restrictions, but on the other hand, they don't want to be vaccinated. It just almost doesn't make any sense."pic.twitter.com/XoKo3C9QbU

If this is such an issue of concern for Saint Fauci, then why didn’t he visit a Sunday show on the station that is known for its Republican audience?

Also, if you take this argument and reverse it, this is precisely Fauci’s argument — “You need to get vaccinated to get rid of the restrictions, but after you do, we  cannot remove the restrictions because of the possibility of variants.”

Here’s the full CNN segment. Some points to note:

He’s talking out of both sides of his mouth here — on the one hand, he’s saying that people need to be able to assess their own risk when making decisions about their health. Still, he’s also fearmongering that people shouldn’t assess their own risk because of an infinitesimally small risk that they might spread illness to others. Which is it, Fauci?

Until we get a clear answer on when things can go back to normal, you’re going to see a whole lot of vaccine hesitancy…except for in places like Florida where the Governor there is giving it to people straight.

“If you get a vaccine … you're immune. So act immune." pic.twitter.com/UdJPIxnUAF

We need more interviews of DeSantis and less of Fauci.