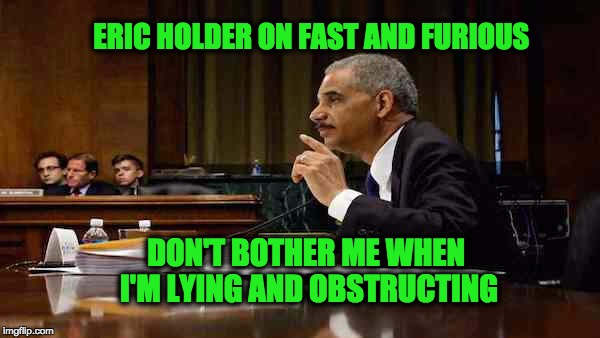 At a public hearing Wednesday members of the House Oversight Committee blasted former President Barack Obama and his attorney general for allegedly covering up an investigation into the death of  Border Patrol agent Brian Terry, killed as a result of the screwed up government gun-running project known as Operation Fast and Furious.

At the same time as the hearings,  House Oversight  Chairman Jason Chaffetz (R-UT) and Senate Judiciary Chairman Charles E. Grassley (R-IA) released a 250-plus page report (embedded below) chronicling the U.S. Department of Justice’s (DOJ) response under Attorney General Eric Holder to the congressional investigation into Operation Fast and Furious. Not surprisingly the report demonstrates that the Justice Department obstructed (and continues to obstruct) Congress and Brian Terry’s family from finding the truth.

Fast and Furious is the name of the scandal where the “geniuses” high up in ATF, the DOJ and  possibly the White House thought it would be a great idea to sell assault weapons to the violent Mexican drug cartels, even if they were used to commit crimes. One of those guns was used to murder US Border Control Agent Brian Terry.

The Fast and Furious weapons ceded to the drug cartels have been used for other crimes in Mexico, used to kill Border Agent  Brian Terry, turned up  at the scenes of violent crimes in Phoenix, as well as at least 11 other violent crimes across the country.

Since news of the program began to emerge in 2010, the Obama administration did it’s damndest to keep the program under wraps. Finally as the House of Representatives was about to charge then-Attorney General Holder with contempt of Congress for withholding documents about Fast and Furious president Obama tried to save the day by asserting executive privilege at the last moment. Congress found the AG in contempt anyway and U.S. District Court Judge Amy Berman Jackson, who was appointed to her position by President Obama ruled that Obama’s use of executive privilege was not legal.

Emails released in 2011 revealed that ATF big shots wanted to use the illegal gun sales in operation Fast and Furious to justify a new gun regulation called “Demand Letter 3”. The new rule would require  U.S. gun shops to report the sale of multiple rifles or “long guns.” The fancy name, Demand Letter 3 comes from the fact that it would be the third ATF program demanding gun dealers report tracing information. If that’s how then name projects, why didn’t they name Fast and Furious, “Asinine Project 1?”

Fast and Furious was a sick attempt to deprive Americans of their Second Amendment rights by selling guns to Mexican Gun cartels.

Sen. Charles Grassley, R-Iowa, testified Wednesday in front of the committee, accusing DOJ and ATF officials of obstructing the investigation and working to silence ATF agents who informed the Senate of Fast and Furious.

“The Department of Justice and ATF had no intention of looking for honest answers and being transparent,” said Grassley, now chairman of the Senate Judiciary Committee and a staunch supporter of whistleblowers. “In fact, from the onset, bureaucrats employed shameless delay tactics to obstruct the investigation.”

One of those silenced ATF agents, John Dodson, testified Wednesday that he remains “in a state of purgatory” since objecting to Fast and Furious and has been the subject of reprisals and ridicule at the agency.

“That decision, the single act of standing up and saying, ‘What we are doing is wrong’… instantly took my standing from being that of an agent of the government – to an enemy of the state,” Dodson said. “ATF and DOJ officials implemented an all-out campaign to silence and discredit me… Suffice to say, the last six to seven years at ATF have not been the best for me or my career.”

Key Points in the report include:

DOJ viewed the Terry family as a public relations nuisance and failed to provide the family with answers regarding Brian’s murder. Despite promises from Arizona-based DOJ officials and senior DOJ officials in Washington, D.C., documents show the Department did not make a genuine effort to keep the Terry family informed or involved in the investigation and prosecution of their son’s murder

Remember when the Justice Department was allowed to investigate themselves? That internal probe was largely a sham, and it prioritized politics and spin over public safety. The Department’s efforts focused on managing the day-to-day media cycle and protecting its senior political appointees rather than thoroughly investigating allegations of misconduct raised by whistleblowers. Documents show senior officials at Main Justice conducted just a cursory inquiry and accepted information received from the Bureau of Alcohol, Tobacco and Firearms and the U.S. Attorney’s Office in Arizona at face value, despite these being the very offices responsible for the wrongdoing.

The report also provides documented evidence that AG Holder managed key elements of the DoJ’s responses to Congress and to the Media rather than focusing on managing DOJ’s law enforcement components. Additionally,  there were no documents to demonstrate the Attorney General ever devised a strategy to track down the more than 2,000 firearms lost along the Southwest border. Nor are there any documents to demonstrate the Attorney General coordinated assistance for the Terry family. Instead, documents show Attorney General Holder absorbed in only the political implications of the various milestone events throughout 2011, and he managed his own image more than anything.

DOJ didn’t give a rat’s arse about the congressional oversight. The documents reveal senior Justice Department officials, including the Attorney General, as having a disdain for the congressional oversight function. With support and direction from senior leaders, staff in DOJ’s Office of Legislative Affairs consistently deployed tactics to delay and withhold information from Congress.

As you may remember In June 2012, the Oversight Committee recommended the House of Representatives hold Attorney General Eric Holder in Contempt of Congress for failing to comply with Congressional subpoenas (which they did). And in January 2016, a U.S. District Judge ordered DOJ to produce previously withheld Fast and Furious documents to the Committee; these documents showed the lengths to which senior Department officials went to keep information from Congress.

Hey, wasn’t the Obama Administration supposed to be the most transparent in history?

Final Fast and Furious Report 2017 by Jeffrey Dunetz on Scribd