Fair And Balanced From Jake Tapper (As Usual) 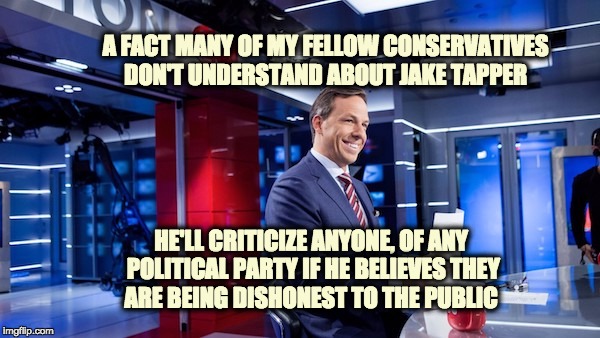 I am sure that many of my fellow conservative’s will give me much crap about this post but I happen to believe that Jake Tapper is one of the fairest reporters on TV. Not that I always agree with him. And it is true that he has been very hard on President Trump, but here’s the part that his conservative critics forget–he is just as hard on the Democrats.

For example yesterday he interviewed my former Congressman Steve Israel (D-Political Hack-NY) about the House healthcare vote. Tapper began the interview by confronting the ex-Rep with what scares him more than anything in the world—truth.

No he didn’t ask the former head of the DCCC why he stiffed his synagogue for over two grand when he decided to join a different congregation (I was on the board of the one he left) But the CNN reporter did confront him about the lies the Democratic Party used to sell in Obamacare, and asked whether they contributed to the problems Obama’s signature legislation if facing today.

Tapper: “Congressman Israel, let me ask you. The way that this bill, the original bill, Obamacare, the Affordable Healthcare Act, the way that was sold to the American people was in many ways mendacious. They [voters] were told if you like your doctor, you can keep your doctor. If you like your plan, you can keep your plan. That’s not true. And it’s just empirically evident out there that insurance companies are leaving Obamacare exchanges, leaving voters, consumers with fewer options, not greater options. Do you think the Democrats, in the way they sold this bill to the public, really undermined their own credibility on the issue of health care?”

Israel: “Well, Jake, look, let’s stipulate that Obamacare is far from perfect, that there were some significant flaws in its execution, including a website that went down.”

Tapper: “I didn’t even remember that one!”

For those who watch Jake all the time know that confronting Democrats as well as Republican is the usual procedure for Tapper. For example it was Tapper who asked of  the Russian Hacking: ‘Isn’t This All a Huge Failure of the Obama Administration?’ It was Jake Tapper who pointed out that NJ Governor Chris Christie got a lot more attention for Bridgegate than Hillary got for Benghazi’

I am not a big fan of the rest of CNN, but if you look at the entirety of his reports each week rather than counting each time he criticizes President Trump, you will find he is an equal opportunity critic–and to be honest there are very few others at any network of whom that could be said.