Why Did Facebook Censor Conservative Posts About Smollett Hoax? 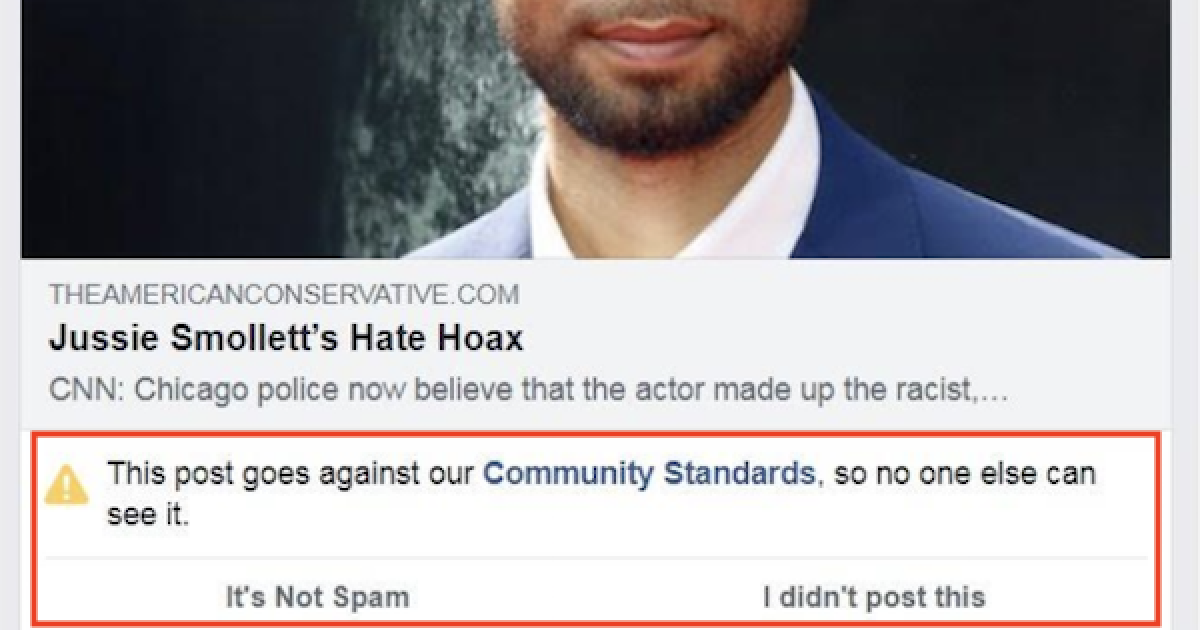 Facebook, the social media giant, dubbed “digital gangsters” by the British Parliament has apparently decided to bully conservatives who write about, what is being seen by many as the Jussie Smollett “hate hoax.” Articles about the case written by conservatives were apparently seen as unclean and not fit for human consumption, according to a report at Twitchy.

This is what he got:

You are not allowed to say on Facebook that Jussie Smollett carried out a hate hoax. pic.twitter.com/jnFx7aQFbS

Other conservatives got similar results:

This is what I get when I try to share that article pic.twitter.com/nOu6dd1Fyz

My friend @JenKernsUSA’s incisive column on #jussiesmolett and the hoaxes of the past, has been blocked by @facebook for “violating community standards” — but you can read and share it here — https://t.co/qHkRBzdP6x

Matt Yglesias, however, was able to successfully post an article on the subject from ABC News, making it appear as though only conservative posts are being censored.

I am eager to embrace anti-Facebook narratives, but in the spirit of not spreading misinformation based on early partial reports I tried it myself after I read Dreher’s post and there was no problem. pic.twitter.com/28dqGOw0kn

But that didn’t sit well with some others.

Someone reported you. FB has a poor algorithm for handling complaints and complainers can shut down accounts very easily now

It’s possible that someone reported your post and that it threw it into an automated queue for manual review. Not saying FB isn’t cancer, but Twitter is worse. We either use these platforms to spread truth while we can or not. At least, that’s how I see it.

so nice of facebook to make me look bright for never joining https://t.co/M2RrmXL6wR

Unfortunately, the Duke Lacrosse Team could not be reached for comment. Sigh.

FB is garbage. I left in November and I’ve never felt freer from a drag on my time and intelligence.

Incidents like this are the reason Facebook is included in the cabal some writers call “Silicon Valley Axis of Evil” working to stifle conservative speech online.