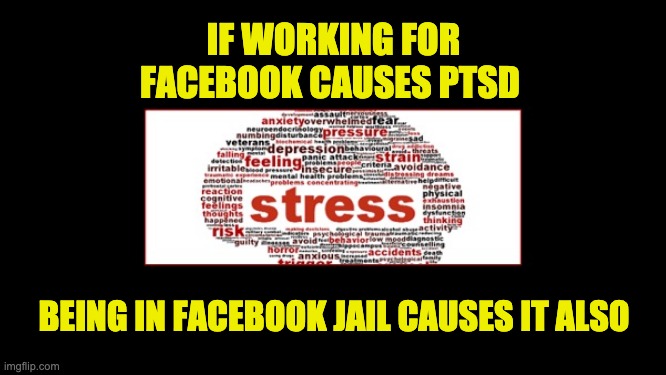 While Facebook continues to grow into an unwieldy beast of influence, some who’ve long worked on the inside of the social media giant are now claiming that their employment was “traumatizing.” As someone who has spent too much time in Facebook jail in recent years, I find the results of their employment traumatizing.  Facebook employs a massive team of moderators eyeing all of the content sent to the world via Mark Zuckerberg’s creation.  Facebook causes mental stress

The particular moderators suing the tech giant worked at Facebook’s headquarters in Ireland, Germany, and Spain. Their task was to identify and take down violent and sexual content on the site, which is a legit task as opposed to the Facebook employees whose job it is to censor conservatives.

The moderators say that their time on the job was traumatizing and they’re suing Facebook on account of their mental distress:

Dozens of Facebook moderators are suing the social media giant for severe mental trauma after being exposed to violent and sexually disturbing images at work.

The 30 staffers, whose job was to spot and remove harrowing material on the site, claim they were not given adequate training to deal with the content or access to doctors or psychiatrists while working for Facebook.

Their lawyers revealed that several have attempted suicide, while others have been diagnosed with post-traumatic stress disorder (PTSD), similar to the torment some soldiers suffer after returning from battlefields.

Holy Cow!  That’s much worse than what I suffered. I would never claim PTSD from being mistreated by the tech giant–I just cry a bit.

This is not the first time Facebook was sued by moderators because the job has hurt them mentally.

In May 2020, Facebook “agreed to pay $52 million to current and former moderators to compensate them for mental health issues developed on the job.:

Each moderator will receive a minimum of $1,000 and will be eligible for additional compensation if they are diagnosed with post-traumatic stress disorder or related conditions. The settlement covers 11,250 moderators, and lawyers in the case believe that as many as half of them may be eligible for extra pay related to mental health issues associated with their time working for Facebook, including depression and addiction.

Facebook has repeatedly claimed that its content moderators are adequately trained to handle these situations telling the Daily Mail:

‘Everyone who reviews content for Facebook goes through an in-depth, multi-week training programme on our Community Standards and has access to extensive psychological support to ensure their well being.

‘This includes 24/7 on-site support with trained practitioners, an on-call service, and access to private healthcare from the first day of employment. We are also employing technical solutions to limit their exposure to graphic material as much as possible. This is an important issue, and we are committed to getting this right.’

Committed to getting this right?  The only things Facebook commits to getting right is to destroy conservative opinion and to do its best to elect liberals into political office.