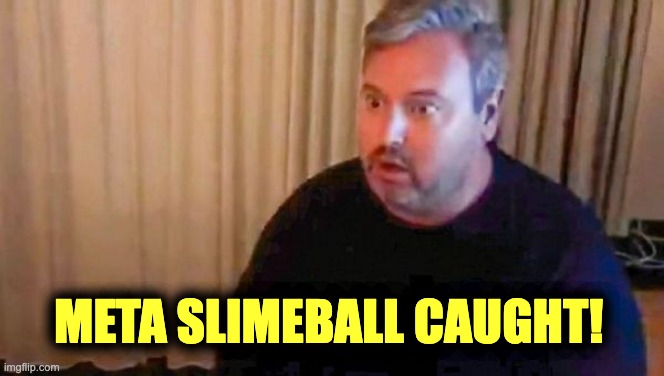 Have you noticed just how many of our ‘moral superiors’ keep showing up in shockingly sketchy situations?

Anyone paying attention has noticed that the left has long since changed its political tactic in dealing with the right. Instead of discrediting ideas, they discredit people. Our side, as a group, gets smeared with all of the ‘ist’ and ‘phobe’ language the media can crank out at us.

Facebook (now ‘Meta,’ if anyone cares) has been on the leading edge of silencing the voices of those ‘bad’ people on the political right… including our scrappy site, and Zuck himself was funneling millions and millions of dollars into battleground states, not in advertising dollars, but as strings-attached funding to supposedly impartial government agencies, with the specific aim of increasing GOTV efforts in urban blue districts. Georgia even has a criminal investigation into how those drop boxes were used in 2020.

Here’s a sting set up by amateur predator catchers finding a Meta employee in a meet where he was expecting a 13-year-old boy to knock on his door for entirely explicit reasons but was instead met with cameras and consequences.

In the American system, allegations remain allegations until proven in a court of law. We’ll let the man’s shamefaced excuses to some very uncomfortable straightforward questions speak for themselves.

This is so wild. Facebook/Meta's Manager of Community Development, Jeren A. Miles, was allegedly caught in an amateur child sex sting. YouTube channel "Predator Catchers Indianapolis" live-streamed their interrogation of him. Read my breaking report:https://t.co/V0iePnkwKR pic.twitter.com/D1aw1BDdeP

The sting found him in the same hotel room he had given the supposed 13yo boy in the chat.

Naturally, his social media has since been wiped.

The Daily Caller contacted Meta (Facebook) and confirmed that he had been an employee, but he has since been let go.

“The seriousness of these allegations cannot be overstated,” the spokesperson told the DCNF. “The individual is no longer employed with the company. We are actively investigating this situation and cannot provide further comment at this time.”

Zuckerberg’s team spends an inordinate amount of time digging up dirt on other people to see who is unworthy of a place in polite society.

Maybe they should take a break from their endless political witchhunts of people trying to spread the truth and look into the quality of people in their own Meta home.

Kudos to these amateurs. It’s a good thing if people giving a hotel room number to a child are looking over their shoulder and wondering if it’s a trap.

By the way, Jeff would post this on his Facebook page, but he’s been banned from posting more than once every few days.