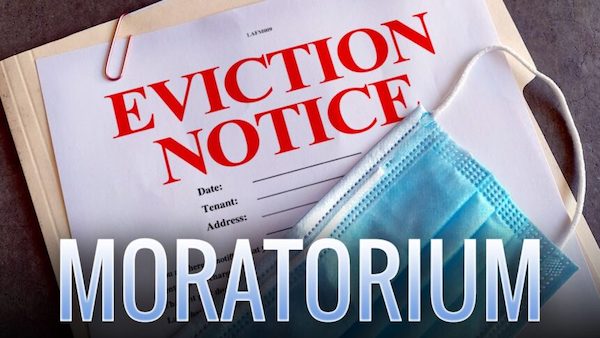 With only hours before it finally expires, the White House flipped Thursday, calling on Congress to extend the federal eviction moratorium slated to expire.

When announcing the most recent extension last month, much-maligned CDC Director Rochelle Walensky stated this would be the final time, and the White House concurred.

Then Press Secretary Jen Psaki abruptly announced the shift, citing “the recent spread of the Delta variant, including among those Americans both most likely to face evictions and lacking vaccinations.

“President Biden would have strongly supported a decision by the CDC to further extend this eviction moratorium to protect renters at this moment of heightened vulnerability,” she added.

“Unfortunately, the Supreme Court has made clear that this option is no longer available.  The President calls on Congress to extend the eviction moratorium to protect such vulnerable renters and their families without delay.”

In addition, the Biden administration asked the Departments of Housing and Urban Development, Agriculture, and Veterans Affairs to extend their eviction moratoria through the end of September.

But delays and confusion have hindered the process for over a year.

The federal government set aside nearly $50 billion for the programs, yet barely $1 billion had been disbursed to at-risk renters and landlords through July.

Nonetheless, roughly half these funds will still be available to grantees through 2022, with the remaining half do not expire until late 2025.

“The Biden Administration is failing to provide Emergency Rental Assistance to Americans in need. With millions of families worried they’ll lose their homes in 10 days, we need to act now to correct this gross mismanagement,” the North Carolina Republican said.

“Republicans have a solution, the Renter Protection Act, to get this aid out the door. But instead of working with us, Democrats are more focused on their progressive agenda — leaving renters twisting in the wind.”

“Housing advocates” have long fearmongered that millions of renters could lose their homes, a situation exacerbated by state and local bottlenecks in the distribution of assistance.

But the government has also directly handed out well over $3,000 per individual the past year, along with additional unemployment benefits, to avoid hardships. Companies everywhere are also desperate to hire, with many entry-level jobs paying $15 an hour.

“I’d wager many complacent folks skipped paying rent by choice,” I wrote in May. “Want housing to be less accessible? Take away landlords’ revenue stream and push them into foreclosure. Why have a lease agreement if the tenant doesn’t adhere to it? More importantly, the government has no business sticking its nose into agreements between private parties.”

Rather than move on and help innocent landlords who’ve lost millions, Democrat House leadership currently is in a frantic Friday rush to nail down votes for another irresponsible extension before departing for August recess.