OH COME ON! The bodies aren't even cold yet! 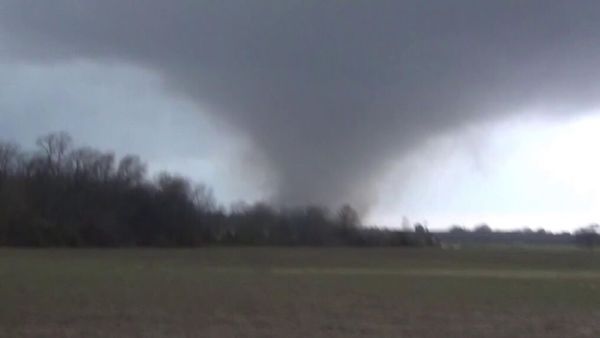 Friday night, a horrible series of tornados ripped through Arkansas, Kentucky, Tennessee, Missouri, and Illinois. There are different reports of deaths, but all accounts have totals, 100+ people. Looking at the pictures, it is evident that even more people have lost their homes and have nowhere to go in freezing temperatures.   A woman on FNC this morning cried as she said, “All I want to do is go home, but I have no home to go to.”

Normal people who read the stories of the tragedy or watched the reports on T.V. prayed to their version of God to help the homeless and comfort the bereaved.

But it appears that the believers of the global warming hypothesis aren’t normal. Their first inclination was to exploit the tragedy to sell their theory by blaming the storms on climate change. Their claims ignore the science.

From President Joe Biden on down, the usual suspects are already rushing to suggest that last week’s deadly tornados are yet another reason the world needs to do more about climate change. Yet no science supports the claim that tornados or any other form of humanity-threatening extreme weather is on the upswing, let along links the supposed threat to global warming.

Fact is, every natural disaster these days — flooding, hurricanes, heat waves, drought, etc. — gets flogged as a reason for climate action, even though the worldwide death toll from extreme weather has been dropping steadily for decades.

They exploit any bad news to sell their hypothesis. In 2018 when a polar vortex brought record colds, it blamed climate change. Yep, there were crazies claiming record colds were caused by global warming.

Let’s start with a truth climate ‘change’ is real. In fact, the Earth’s climate has been changing almost as long as there has been an Earth because the climate is cyclical. There is no proof that climate change has anything to do with mankind. The climate change hypothesis is based on two things.

1)Computer models used to tie man to climate change were not only bogus but impossible to be correct. Climate change enthusiasts are too reliant on computer models. They will work for years coming up with proprietary computer models containing all their prejudices, input thousands of numbers and come up with a long-term prediction of what will happen.  The computer models have been wrong because there are too many variables in the Earth, Moon, indeed the entire Solar System that scientists haven’t discovered and put in a computer model. These computer model developers’ heads are stuck up so far into their hard drives, they won’t admit it.

2) Worldwide redistribution of income. In 2011 Ottmar Edenhofer, who was the author of the 2010 U.N. climate assessment, admitted in a speech it was not about climate but “about how we redistribute de facto the world’s wealth.”

2015 saw Christiana Figueres, the executive secretary of U.N.’s Framework Convention on Climate Change, say the goal of environmental activists is not to save the world from ecological calamity but to destroy capitalism.  Referring to the new international treaty environmentalists hope will be adopted at the Paris climate change conference later this year, she added: “This is probably the most difficult task we have ever given ourselves, which is to intentionally transform the economic development model for the first time in human history.” In other words, to destroy capitalism.

This is why the fiercest defenders of the hypothesis are the far left—the people who want to change the economy from capitalism to socialism.

Climate Depot reported on some of the reactions from weather professionals to people blaming the tornados on climate change. Meteorologist Chris Martz had the most direct response:

This is utter bullshit. https://t.co/eiEnBZKAkH

In 2019 Climatologist Dr. Roy Spencer, former Senior Scientist for Climate Studies at NASA’s Marshall Space Flight Center, wrote, “Recent Tornadoes are Due to Unusually COLD Weather’ – To claim ‘global warming’ as cause for tornadoes’ is directly opposite to the clear observational evidence.”

"how tornadoes… will change is an open question" https://t.co/UlTTkml7lp

One of my favorite examples is something I found a few years ago: The climate crazies blamed the increased tornado activity on global cooling. In a story about the coming ice age on June 24, 1974, Time magazine reported:

Scientists have found other indications of global cooling. For one thing there has been a noticeable expansion of the great belt of dry, high-altitude polar winds — the so-called circumpolar vortex—that sweep from west to east around the top and bottom of the world. Indeed it is the widening of this cap of cold air that is the immediate cause of Africa’s drought. By blocking moisture-bearing equatorial winds and preventing them from bringing rainfall to the parched sub-Sahara region, as well as other drought-ridden areas stretching all the way from Central America to the Middle East and India, the polar winds have in effect caused the Sahara and other deserts to reach farther to the south. Paradoxically, the same vortex has created quite different weather quirks in the U.S. and other temperate zones. As the winds swirl around the globe, their southerly portions undulate like the bottom of a skirt. Cold air is pulled down across the Western U.S. and warm air is swept up to the Northeast. The collision of air masses of widely differing temperatures and humidity can create violent storms—the Midwest’s recent rash of disastrous tornadoes, for example.

Almost a year later, in April 1975, Newsweek wrote, “the most devastating outbreak of tornadoes ever recorded,” killed “more than 300 people” this, according to the magazine, was among “the ominous signs that the Earth’s weather patterns have begun to change dramatically.”

it’s getting cold by on Scribd

When the cooling wasn’t working, they changed it to global warming. When that didn’t work, it became climate change

Here is the truth that nobody who believes in the climate change hypothesis will admit.  If climate change believers genuinely believe that tornadoes are tied to a still warming earth, then we should all be wearing ruby slippers and following a yellow-brick road to Emerald City.

Despite the Biden government’s push for the green new deal, even the U.S. government says the climate isn’t changing. Per the NOAA Satellite temperature data, between the El Niño around 1997 and the one around  2015, the temperature of the Earth didn’t change–nada. It’s called “the great pause.” After that last El Niño ended, a new pause began and continues today, albeit at a slightly higher 0.3C degree increase plateau.

But wait? Then how can people claim the temperatures are rising? That’s the fun part. When it was still called global warming, the purveyors of the hypothesis demanded scientists start tracking satellite data because it was more accurate than earthbound temperature tracking. But when the satellite data began to show a pause in warming, those same scientists decided to ignore the data.  At the same time, they stopped claiming global warming and changed the name of their worldwide redistribution of income program to climate change.

What about the future? The believers in the hypothesis say we are nearing the end of the Earth because of climate change, but I wouldn’t stop paying your bills yet. Because the Earth’s climate has been changing for billions of years.