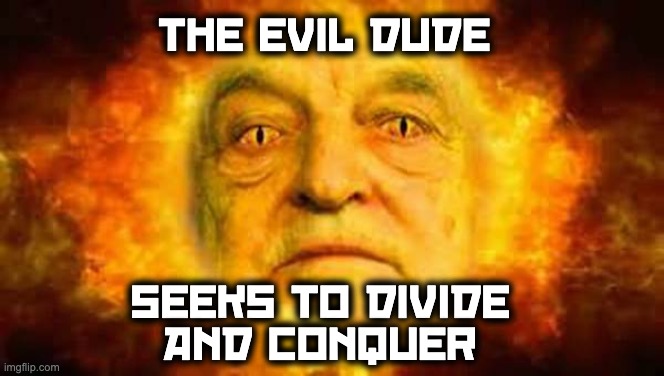 This goes to show you just how out of touch the Left is with the people that they say they are advocating for, and how far they will go to turn this country into a “progressive paradise.” evil dude Soros donates

According to FEC records, billionaire leftwing donor, George Soros, the evil dude, has given a cool $1 million to the activist group, Color of Change, committed to advocating for the “defunding” of police.

Soros sent the million dollars via his Color Of Change PAC on May 14, according to Federal Election Commission files obtained by the Washington Free Beacon.

The organization describes itself as “the nation’s largest online racial justice organization” and actively engages in efforts to defund police departments such as spreading an online petition calling for “divesting from and dismantling the systems that unjustly harm Black people.”

The group also backed a push by the Milwaukee City Council to defund the police.

“Policing is a violent institution that must end,” the group’s president wrote in a statement supporting the move. “We imagine a country where there is enough money to educate our children, care for our sick and feed those who are financially unstable. Defunding the police allows for this vision.”

Many left-wingers say that right-wingers are obsessed with painting George Soros as a “villain” and snort as they say he’s the “boogeyman” living inside their heads. Well, to that… right back at ya with the Koch brothers — or, brother, as the case is now.

But here’s the thing about that, Soros IS an evil dude but more about that later.

There is something to be said about the power to influence particular political views that the people who have the “f**k you” money to throw at the causes that they prefer. The left really doesn’t like “big money” funding issues that they disapprove of, but seem to turn a blind eye when it’s consistent with their worldview. And if you dare to condemn their White Knight, Soros, they’ll call you antisemitic.

Soros has also been pushing his “progressive” views on law enforcement by heavily funding like-minded candidates in District Attorney races. The result is that many jurisdictions have seen crime skyrocket.

The Daily Mail reports that there was one shooting every twelve minutes in the U.S. between Saturday, July 17, and Friday, July 23.

The more cynical sorts might just think that high crime in cities is the goal for the leftists who want to pull back Second Amendment rights from law-abiding citizens… by citing high levels of gun crime. And yet, the vast majority of these crimes are done with illegal firearms because, to paraphrase the famous Jeff Goldblum line in Jurassic Park, “crime finds a way.”

Meanwhile, polls show that this is the exact opposite of what voters want — even Democrats in large cities.

A recent poll in Detroit revealed that 90 percent of residents wanted more cops on the streets in their city to tackle the significant rise in violent crime.

Lifelong Detroit resident Charlita Bell, 41, was among those called in the poll and recounted to USA TODAY how her car was hit by stray bullets during a shopping trip.

‘It’s scary sitting in the house, and when you go outside to the gas station or the store, it’s possible someone will be shooting right next to you,’ Bell said.

Rita Gibbs, 70, told USA TODAY that she is so distressed from violent news that she hates to watch it.

‘It’s always some random shootings. I just can’t stand it,’ she said.

Democrats in the legislature, just like Soros, are out of step with what residents actually want.

Despite the perceptions of the community, Democrats in Michigan’s House of Representatives announced a slew of bills last month to reform policing in the state, WOOD-TV reported.

The package of 16 bills included measures such as banning chokeholds and no-knock warrants, as well as ending the legal doctrine of ‘qualified immunity’ – which protects officers from lawsuits.

‘There is absolutely nothing political about this bill package,’ Rep. Tenisha Yancey said while announcing the bills.

It’s not just in Detroit, either. Several other polls in other cities show the same sentiment.

Last month, a WNBC, Telemundo 47 and Politico poll of New Yorkers found that 70 percent of black Democrats wanted more policing. The same poll showed that 21 percent of likely Democratic voters wanted the return of the plainclothes anti-crime police in some neighborhoods.

The MacArthur Foundation Harris poll conducted in June found that 79 percent of Chicago residents said that they “feel safer when they see police in their neighborhoods.”

Another recent USA Today/IPSOS poll found that 70 percent of respondents wanted police budgets to increase rather than decrease, and 66 percent believe that violent crime has become worse in the past year.

But Soros doesn’t care…he does what he wants.  The Democratic Party’s Progressive Puppet Master is often referred to as the “man who broke the bank of England” in the 1992 Sterling crisis. During that crisis, he made $1 billion in one day at the expense of British taxpayers and drove Britain into a recession as large numbers of businesses failed, and the housing market crashed.

At the time Soros was suspected of dealing based on inside information. The rumor then was that  Soros was acting on insider information obtained from the French central bank and the German Bundesbank. The insider information was that they would not support the British pound, despite a pre-existing arrangement to do so. Given that Mr. Soros is no fool, the British believe it is highly doubtful he would have made such a colossal bet without knowing with high certainty that the Germans would not reduce their interest rates.

Liberals like to claim that criticism of Soros is based on Antisemitism which is a liberal lie as Soros is the sugar daddy behind many anti-Semitic organizations:

Since 2001 the Soros network has given $2,688,561 to Adalah. According to NGO Monitor, Adelah describes itself as an “independent human rights organization.”  Adelah has been instrumental in falsely accusing Israel of war crimes on numerous occasions, including contributing charges to the now-disgraced Goldstone Report and the fake 2002 report of an Israeli massacre in Jenin.  Adalah has also called on governments the world over to sever or downgrade their diplomatic relations with Israel.

Another favorite for Soros money is I’lam, which is a Nazareth-based Palestinian media center. I’lam claims its mission is “to empower the Palestinian media landscape and society by promoting equal access to the Israeli media, encouraging a fair information flow, and fostering professional standards.”  Not stated in their mission but reported by NGO Monitor is the fact that I’lam creates and promotes allegations of media bias in the Israeli media as part of its political agenda. I’lam received about $1.1 million from the Soros organization.

The New Israel Fund (NIF) is also listed as a recipient of Soros’ love, $837,500 since 2009. The NIF donates money to anti-Israel groups dedicated to making false charges and/or promote the anti-Semitic BDS movement including Adalah, B’Tselem, Breaking the Silence, and Physicians for Human Rights, Social TV, and 972 Magazine, just to name a few. Women Against Violence (WAV): received $1,430,000 of Soros and also supports the antisemitic BDS movement.

Along with advocating for the Boycott, Divestment, and Sanctions (BDS) movement, Mada al-Carmel – Arab Center for Applied Social Research which received $707K from Soros was one of the creators of the Haifa Document in 2007. The Haifa Document calls for a “change in the definition of the State of Israel from a Jewish state” and accuses Israel of “exploiting” the Holocaust “at the expense of the Palestinian people.”

Put it all together it is clear that Soros is not a friend to the United States, instead, he is trying to stir up divisiveness by encouraging defunding the police and increasing crime.  And criticizing Soros has nothing to do with Antisemitism, but cause the Evil Dude is an anti-Semite himself.