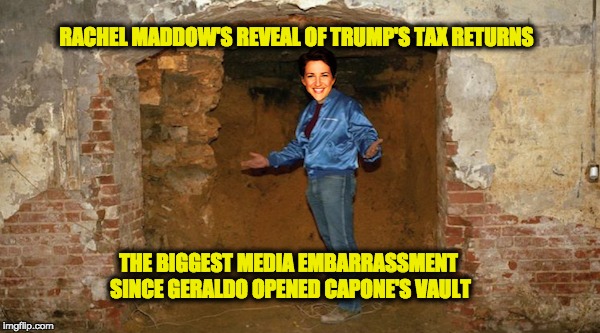 Rachel Maddow’s reveal of two pages of President Trump’s 2005 tax return has to be one of the most embarrassing investigative report reveals in television history.  It was so embarrassing that Geraldo Rivera threw a party because he thinks Maddow’s reveal will make people forget his Al Capone’s vault special (sorry Geraldo that’s embedded in our DNA) Ninety minutes before her show, the MSNBC host sent a tweet  Maddow tweeted what was coming:

That tweet created an earthquake, the MSM and major internet sites announced her upcoming revelation most probably boosting her viewership to levels  much larger than the usual two Bernie Sanders supporters, four members of Liz Warren’s fake Native American tribe, and 12 homeless people watching the picture on televisions in the front windows of their nearest appliance store. And why shouldn’t Maddow announce her coming show, she  thought she was about to broadcast the show of her life, that she would be the hero of every Hillary Clinton voter, and with the same show she would end the presidency of the “evil” Donald Trump. It’s not that there were no major revelations in the tax return. Besides confirming that Rachel Maddow is an idiot we learn some important things about the Trump tax returns:

The reaction to Maddow’s “scoop” was brutal a lot of people were making fun of the MSNBC anchor on twitter including Donald Trump Jr, sister network CNBC and others:

Thank you Rachel Maddow for proving to your #Trump hating followers how successful @realDonaldTrump is & that he paid $40mm in taxes! #Taxes

Op-Ed: Donald Trump just got a nice victory, thanks, of all people, to Rachel Maddow https://t.co/O6Nr6NZPYJ

@AJ @maddow when you think trump is gonna get caught for not paying taxes, then it turns out he paid 38 million???????? where are the updates now?

@anowels @thomdunn @maddow I was wrong. I was what we in the business call “fake news”https://t.co/GZevAiI2uO

Well, I’m not sure how Trump’s going to recover from this one #maddow pic.twitter.com/JnGaDyIDUQ

.@VanJones68: If all we get tonight is that Trump paid $38M to America’s government, that’s a good night for Trump https://t.co/kvYlq8udPf

Note: the some of the tweets above were taken from a post at Constitution.com If you don’t have a weak stomach you can watch the video below of Rachel Maddow’s big failure: g