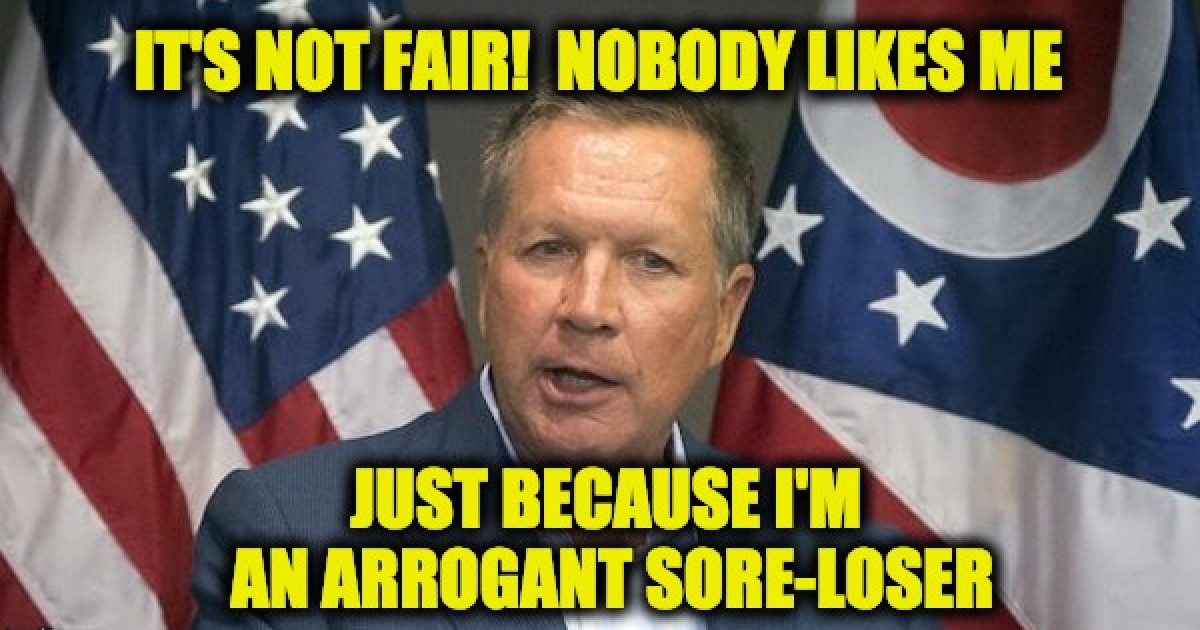 I can’t stand John Kasich. He lost all my respect during the 2016 primary season. Despite the fact he had no chance of winning, Kasich held on and kept running long after Trump had accumulated enough delegates to guarantee the nomination.  In the end Trump had 1,441 delegates winning 41 primaries,  the bitter clinger Kasich finished fourth in total support, winning only his home state of Ohio and 161 delegates.  But Kasich continued to play the sore loser. The GOP Convention held in Cleveland, Ohio.  As the governor of Ohio, Kasich was supposed to be a host of the convention. But instead he played the sore loser who wasn’t interested in party unity, Ohio Governor John Kasich boycotted his own convention.

Truthfully,  who doesn’t have an innate feeling that John Kasich is the biggest jerk in politics? We even got a feel for that this week in the story of the woman who lost her plane seat to the arrogant former Ohio gov.

One segment of Christie’s new book, “Let Me Finish,” details Christie’s conversations with Kasich after the New Hampshire Primary in 2016, Daily Caller reported.

You will recall that Christie did very badly in that contest coming in at a distant sixth place. Kasich, though, finished second but still behind Donald Trump by a healthy amount.

According to Christie, here is how that conversation went:

He asked how I was doing. I told him, okay, considering. “You know what happened to you, don’t you, Chris?” he said.

I told him I didn’t.

Right there, I understood why so many people in politics despised John Kasich. . . .

He didn’t hesitate. “I think you’re going to see that very clearly over the next couple of months.

I guess we did see very clearly Kasich is not only a loser but a childish sore loser.

What the heck does this “shortstop” business even mean? Besides when Christie was on his H.S. Baseball team he played catcher,

The arrogance revealed in Christie’s anecdote really drives home the sort of arrogance we all saw coming from Kasich on the national stage.

Naturally, Kasich is claiming that Christie’s anecdote is “pure fiction” and that it never happened.

But, the incident sure strikes one as a perfect example of John Kasich. Thank God his political career is now over.