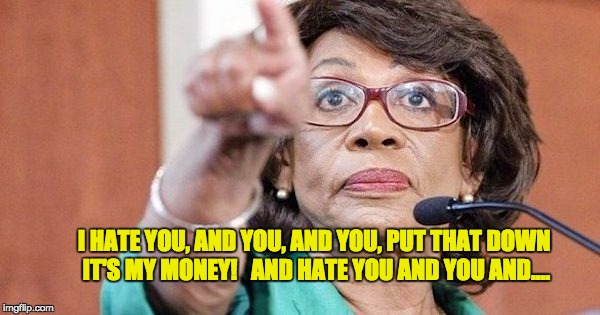 Gotta hand it to [score] Maxine Waters[/score], the California Congresswoman has never met a Republican she didn’t hate, or a corrupt liberal movement she didn’t love, but that doesn’t stop her from spewing her venom in public.  Ms. Waters has been feasting on her hatred of Donald Trump ever since he won the election, even to the point of saying she would never meet with or work with the new president.

Last week she tweeted that she wanted to lead trump into impeachment (I don’t understand how she intends to do that without meeting with him).

Today, I told @cheddar that my greatest desire was to lead @realDonaldTrump right into impeachment.

She was asked about that tweet during a news conference on Monday and doubled down on her venom.

“How can a president, who is acting in the manner that he is acting, whether he is talking about the travel ban, the way he is talking Muslims, or whether he’s talking about his relationship to Putin and the Kremlin — knowing that they have hacked our DCCC and DNC and knowing that he is responsible for supplying the bombs that killed innocent children and families in Aleppo — the fact that he is wrapping his arms around Putin while Putin is continuing to advance into Korea?”

Yes she said Korea (she must have gotten that information from Sheila Jackson Lee who once commented about how nice South and North Vietnam were getting along or Hank Johnson, who warned that too many marines on Guam might tip it over). Well either that or she meant Crimea.

“I think that he is leading himself into that ind of position where folks begin to ask, ‘what are we going to do?’ and the answer is going to be, eventually, we’ve got to do something about him,” she continued.

“We cannot continue to have a president who is acting in this manner. it is dangerous to the United States of America.”

Yes but can we have a member of congress so factually challenged?

Ms. Waters is not one to be talking about the ethics of any government official.

In 2010 Waters was accused of helping an unsound bank (OneUnited) receive government aid to help her husband who was an officer and stock-owner of the bank.

The evidence against Ms Waters includes series of emails from Waters’ Grandson and Chief of Staff, Mikael Moore and members of the House Financial Services Committee:

In the end Maxine Waters avoided the ethics charges by getting her Grandson and Chief of Staff, Mikael Moore to take the fall.  Grandchild Moore got off with a “letter of reproval.” Waters got off despite the fact that she requested the bank bailout money for  a bank where her husband owned stock and had served on the board of directors.” At the time she requested the help, Waters neglected to tell Treasury officials about her financial ties to OneUnited Bank. I bet her grandson got a nice gift for Christmas that year.

Perhaps they left Waters alone because she is such a caring person. The Congresswoman from California believes everybody has the right to HER opinion. After commenting that the Tea Party should go to hell, and President Obama wasn’t doing enough to bash his opponents, who wanted to kill him, she justified the rapes and murders that occurred as part of Occupy Wall Street by saying, “That’s Life and It Happens”

In the video above Waters explanation about impeaching President Trump was confusing and disjointed. What isn’t confusing however, is that the California Congresswoman should probably concentrate on her morals and ethics instead of trying to make up violations by President Trump.