Is this all a part of the run-up to Haley announcing a run in 2024? 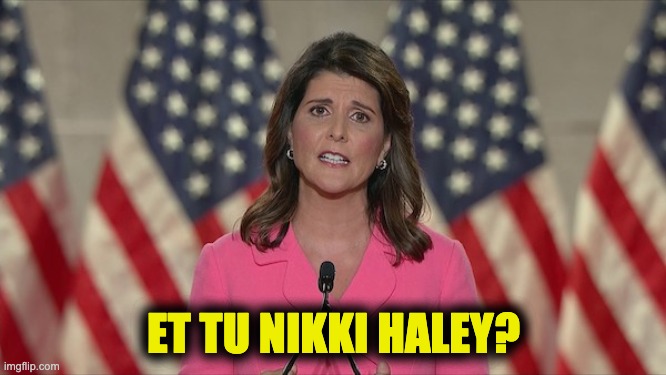 Donald Trump has long been a controversial figure, having earned that distinction well before he even stepped into the political ring.  This was a man famous for firing people, after all.  If folks thought that The Donald was going to be a milquetoast politician, they had another thing coming. But some of the people breaking with him are surprising. et tu Nikki?

In an interview with Politico, former US ambassador to the United Nations Nikki Haley slammed President Donald Trump for the January 6th capitol riot–just as the Senate was about to vote on the impeachment trial of the former president. Was she doing it because she wants to run for president and is hoping the Senate convicts and then bans Trump for running again?

Former US ambassador to the United Nations Nikki Haley directly criticized former President Donald Trump for his involvement stoking the US Capitol riot in a new interview, a notable condemnation from someone who is widely viewed as harboring presidential hopes in a party that is still in thrall to Trump.

Ambassador Haley was a critic of Trump during the 2016 campaign. Is this just a return to those bad old days?

And that wasn’t all:
In the Politico piece, Haley expressed anger over Trump’s treatment of former Vice President Mike Pence on January 6 and said she hasn’t spoken with Trump since then. Trump attacked Pence on Twitter that day for doing his duty of presiding over Congress’ counting of the Electoral College votes, as the mob of supporters broke into the Capitol hoping to stop the certification, some of whom chanted death threats against Pence.

When I tell you I’m angry, it’s an understatement,” Haley told Politico. “Mike has been nothing but loyal to that man. He’s been nothing but a good friend of that man. … I am so disappointed in the fact that [despite] the loyalty and friendship he had with Mike Pence, that he would do that to him. Like, I’m disgusted by it.”

Nikki Haley has been seen by many as a potential Republican presidential candidate in 2024, which gives her criticisms of Trump all the more gravity going forward.
Cross-Posted with Liberty Hub
et tu Nikki?
https://lidblog.com
Facebook Twitter Flipboard