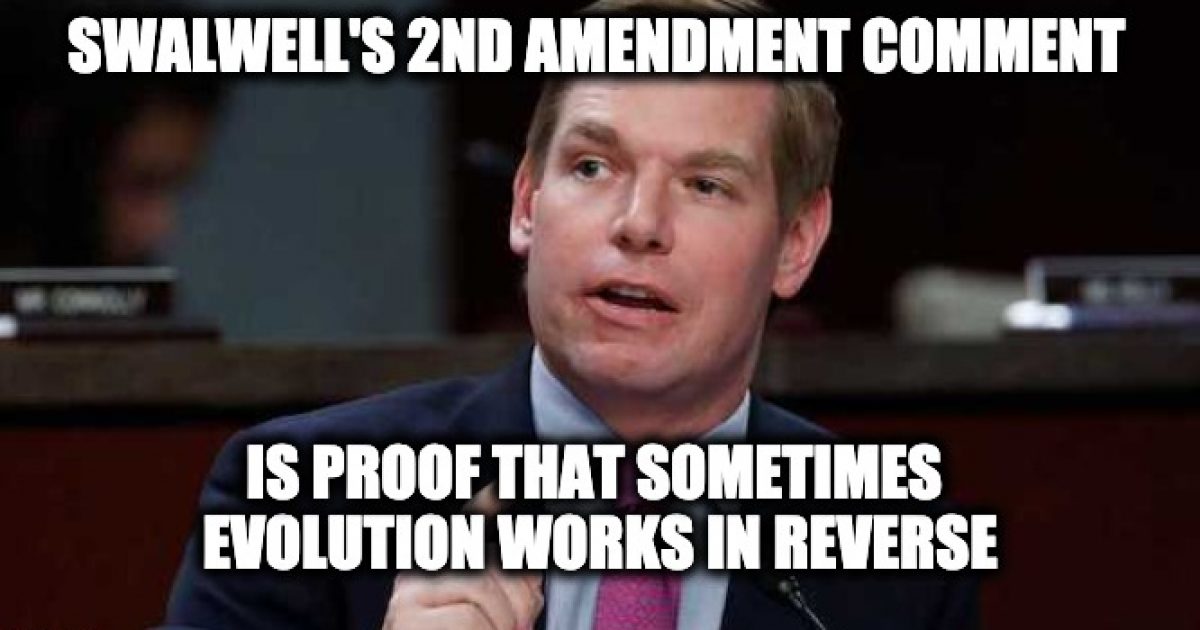 What part of  “unalienable rights endowed by my Creator” and “shall not be infringed” does this despot-wannabe not understand?  Eric Swalwell  (D-CA) who says AG Barr and Robert Mueller are lying because he has personally seen evidence of collusion between the White House and Russia but offers no proof, and has threatened to nuke Americans who don’t want to give up their guns, now say the 2nd amendment is not an absolute right.

On Sunday’s State of the Union, Jake Tapper asked the Democrat if he wanted to take away people’s guns:

I want to invest in gang violence prevention programs, especially in our cities. I want more community-oriented policing. My brother is a Sheriff’s Athletic League police officer. He works in tough neighborhoods and helps them get kids out of the streets and into sports. [But he opposes Trump’s proposal to build a barrier which would help to limit violence from gangs such as MS-13]

There’s a lot that we could do on this issue, but unless it’s the number one issue for a president, it’s just going to be one that we respond to shooting to shooting. I want to lead on it.

Oh, that’s right Rep. Eric Swalwell is running for POTUS.  At least he is not a socialist, he is more of an imbecile.

Removing those weapons from law-abiding Americans makes them potential victims of criminals who by definition do not follow the law, that includes gun laws.  I wonder if the Congressman who has delusions of adequacy also wants the people who had their guns taken away to hang signs on their houses saying, “I used to have a gun but no longer do so attack here.”

The Congressman from Wackoville keeps talking about “weapons of war.” But as he said earlier, it is illegal to own bazookas, tanks, and, rocket-propelled grenades. Actually, it’s also unlawful to possess any grenade or automatic weapon.

To be honest, any gun can be a weapon of war. But then again so can knives or fists. But I refuse to give up the best way of slicing a juicy steak, and I like my fists. After all,  my fists are at the end of my arms where they can be very handy.

And yes despite Rep. Swalwell’s delusions of adequacy no lawful gun owner should be required to hand it over to the government. The Second Amendment to the Constitution says, the right of the people to keep and bear Arms, shall not be infringed, and per the Declaration of Independence, it is one of those unalienable rights endowed by my Creator. That means the government cannot take away that right,  only my Creator can take it away. And if my Creator wanted to take my gun rights away, I assure you that he wouldn’t use nukes like Eric Swalwell threatened.