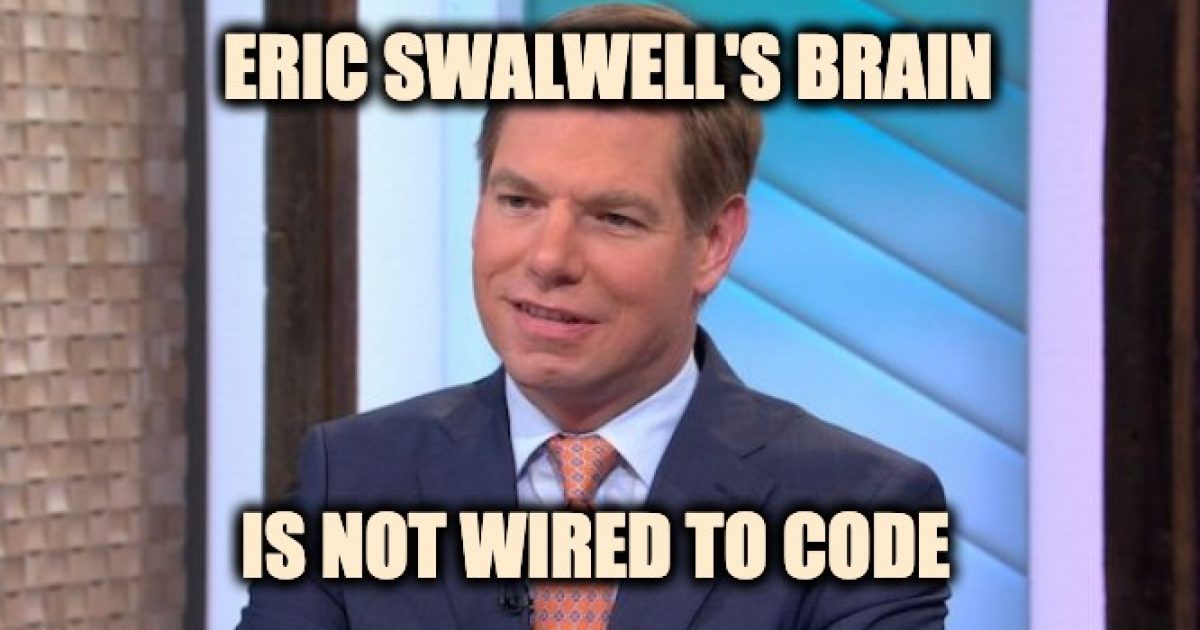 California Democrat Rep.Eric Swalwell should have waited until he died to donate his brain to science. His latest self-embarrassment was a tweet declaring, “SPOILER ALERT: I’m a white man.”

Swalwell is a creep who will lie about anything to advance his career, but on this particular statement, I will not insist he prove its truthfulness, especially the man part. But keep in mind that those who need to talk about it…aren’t.

I know where I can't speak to someone else's experience and I pledge to:
1️⃣ Pass the mic
2️⃣ Ask a woman to serve as VP pic.twitter.com/yz7hUB3bRA

I wouldn’t say that Swalwell lost his marbles, his marbles probably ran away.

Quite a few took Swalwell to task for his ridiculous tweet, including Candace Owens:

This tail-between-the-legs, self-deprecating virtue-signaling is:

Go attempt a push-up and leave the important talk to us adults. #MAGA #BLEXIT https://t.co/tF6HKAIyCE

There were plenty of other good responses, here are a sampling:

My friend Rusty who runs Mental Recession doesn’t believe Beta Boy.  But I am sure Rusty doesn’t want to see proof of his gender either.

So how is he going to interact with Angela Merkel? “I’m sorry, because I’m a man, I can’t speak with you. But Arianna Huffington will be more than happy to!”

This is hilarious. It’s basically a “woke” white guy offering the women he’s running against scraps. Hard to believe this isn’t parody, but here we are.

You know a glass of water with a D written on it can beat you ..

After his spoiler alert, many people in California’s 15th CD are praying he runs against that glass of water.

Then there was this little reminder of what Swalwell once suggested using against law-abiding gun owners: