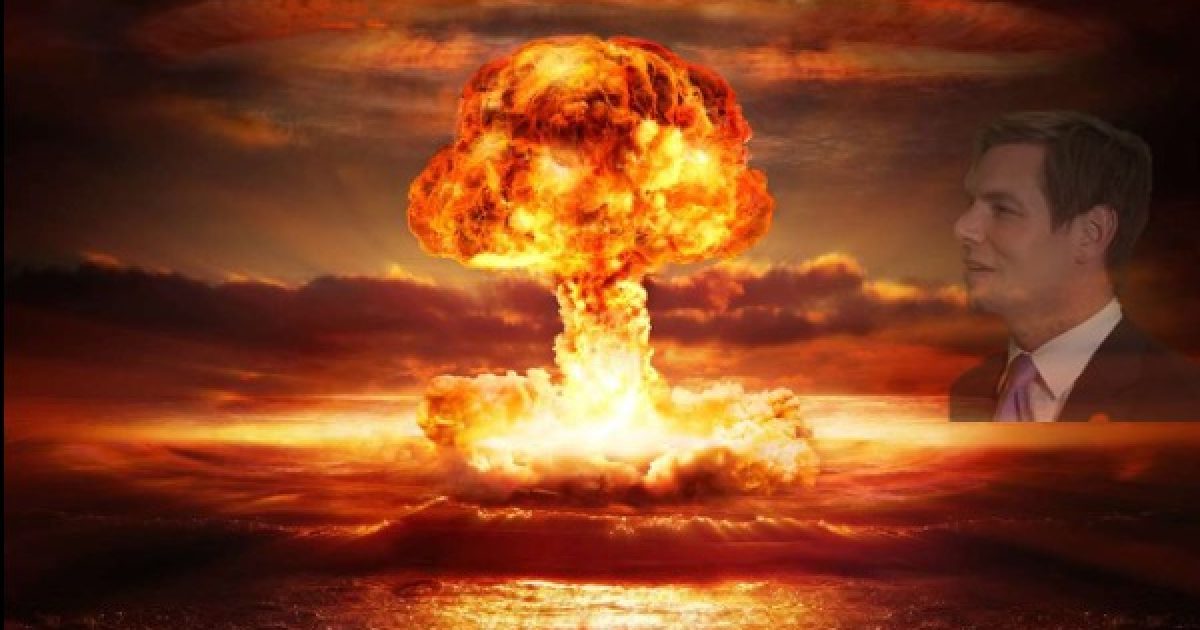 It’s hard to say which realm Eric Swalwell of California shows worst in with his latest tweet series: political judgment, understanding of the Constitution, or comprehension of the impact of a nuclear detonation.

On Friday, as part of an ongoing Twitter dialogue on gun confiscation, Swalwell tweeted the following in response to a tweep angry about the “confiscation” threat. The tweep — @Rambobiggs — had vowed to fight back against any such attempt.

The “common ground” reference is a nice — if laughable — touch after Swalwell acknowledged favoring gun confiscation in an earlier tweet exchange:

She’s not lying. We should ban assault weapons by buying them back or restricting them to ranges/clubs. #EnoughIsEnough https://t.co/XbRpOvXlF3

But more fundamentally, Swalwell clarified that he can’t be taken seriously by going high-order so promptly with the allusion to nukes. Regarding political judgment, “We’ll nuke you, fool — but hey, I’ll signal virtue here; let’s find common ground” is not impressive diplomacy with angry citizens.

Nor is a blanket endorsement of bans and confiscations a good sign that Swalwell understands the U.S. Constitution and can be relied on to uphold it. It’s rather the opposite. Apparently, Swalwell urgently demands to do something that the Constitution would stop him from doing.

And then there’s the “nukes” thing. If Swalwell had said, for example, “The government has tanks,” or “155mm howitzers,” or “infantry brigades with fully automatic, actual ‘assault weapons’ as well as man-portable mortars and rockets, armored infantry fighting vehicles, night-vision devices, laser designators, close air support, drones, secure communications, and persistent tactical intelligence,” that might have made sense as a comparison of relative combat power.

Instead, Swalwell went in sophomoric fashion directly to “nukes,” neither passing GO nor collecting $200, as if “nukes” are a closer.

But you can’t nuke your own countryside to put down an insurrection unless you want a whole lot of your own people to be incinerated, and then see more of them sicken and die hideously. No insurrection-involved target would justify using a nuclear weapon, even in purely military terms. The grotesque, militarily unjustifiable attack would be extraordinarily self-defeating if you’re located east of your target, as Washington, D.C. is from the vast majority of U.S. territory. The reference to nukes is just silly.

So we cycle back to the point about political judgment. If Swalwell wants to be more grown-up than the tweeps, one thing he could consider is gaining insight about why America’s Founders thought of the Second Amendment as a basis for the people to hold the federal government accountable, and force it to stay within its constitutional limits.

It wasn’t because the Founders thought local groups of armed citizens could prevail in combat against the full resources of the central government. Even in a world without A-10s, armored tanks, networked surveillance, and over-the-horizon targeting of precision weapons, the Founders didn’t expect that.

Their expectation was instead that armed citizens would be a continuing deterrent to government excesses. The cost of trying to ram through overreach on an armed people would be too high, and the central government would rarely if ever be willing to start that fight.

The Civil War seemed to bear that expectation out.  It was started not by the central government but by an organized opposition in the Southern states.  Those who proposed to settle the questions of state “sovereignty” and slavery through the due processes of the central government were prepared to do so without shooting.  That was mostly because they were, year by year, an incrementally increasing majority, and had momentum on their side.

The Southern states forced the issue by going kinetic, which is basically what Swalwell is proposing.  This isn’t the first time a sitting representative has made silly threats about attacking his countrymen.  Legislators from the Southern states did that a number of times before 1861.  But it would be worth Swalwell’s time to reflect on which faction of the American Civil War he’s behaving like.