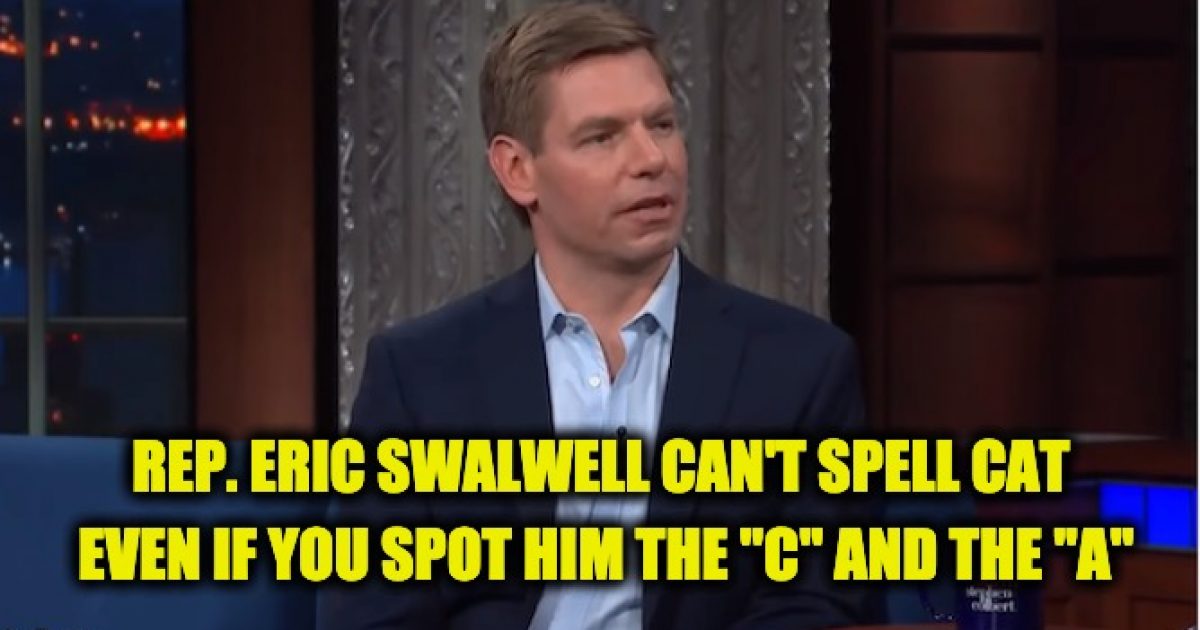 Maybe he forgot the Mueller report has been released. Or perhaps he is simply illiterate, or mentally- challenged.  Because Rep. Eric Swalwell continues to believe that President Trump colluded with the Russians.

Muller’s report didn’t say there wasn’t enough evidence of collusion, it said there was NO evidence that the Trump campaign or anyone else in America colludes with the Russian internet Research Agency (IRA) that led the infiltration into the 2016 election.

But the I.Q.-challenged Swalwell claimed it revealed “evidence of collusion and coordination,” but not beyond a reasonable doubt.  Swalwell’s statement proves he cannot read and comprehend the written word, or that his mother allowed him to play too many games of high school football without a helmet. Either way, it is a perfect example of what Adam Savage meant when he would say on Mythbusters, “I reject your reality and substitute my own.

Interviewed by MSNBC’s Ari Melber Wednesday Rep. Swalwell proved again that he wouldn’t be able to figure out how to pour water out of a boot even if there were instructions on the heel. “I accept that I probably should have been out there a little bit earlier because who knew how many links there were? 200 pages of links,”

Melber tried again, asking if he no longer maintained that Trump is a “Russian asset.”

“No, I think he acts on Russia’s behalf and I challenge him to show me otherwise,” Swalwell answered.

“I think he acts on Russia’s behalf too many times and he puts their interests ahead of our interest.  He pulled us out of Syria he wants to reduce the role of NATO he can use to pull back sanctions on Russia he won’t tell us what he talked about with Vladimir Putin and he won’t tell us anything about his finances.”

Yes, but Trump sent 59 cruise missiles into Syria, kept some troops in Syria, tried to get our NATO allies to pay their promised share of military spending strengthening the entire alliance,  opposed the Nord Stream 2 pipeline between Russia and Germany, armed the Ukrainians fighting the Russians, pulled out of the Iran deal and increased economic pressure on the rogue regime, and ended U.S. adherence to the Intermediate Nuclear Forces treaty because the Russians weren’t following it, just to name a few examples.

But that didn’t motivate Swalwell to tell the truth, throughout the interview, Swalwell refused to say he accepted the Mueller report. A video of the Ari Melber interview of Eric Swalwell follows: