Eric Holder Said WHAT? Am I On Candid Camera? 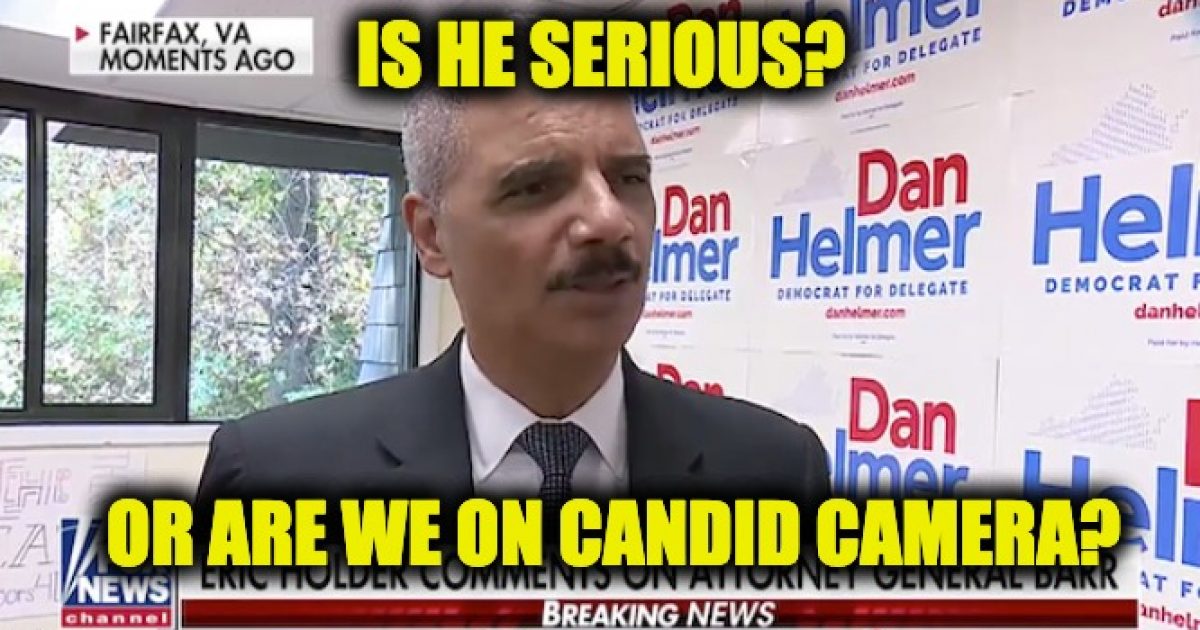 Speaking at a campaign event for Dan Helmer whose running for the Virginia State legislature, Barack Obama’s first attorney general, Eric Holder weighed in on AG William Barr’s appointing of U.S. Attorney John Durham to investigate possible misconduct by the intelligence community at the outset of the Russia hoax: Eric Holder Barr

Crossing a political line? The AG who bragged about being Barack Obama’s “Wing-Man?” Alan Funt is dead, but somehow I still expect him to come out behind a curtain and say, “smile you’re on Candid Camera.”

We are talking about the man who dropped the slam-dunk case against the New Black Panthers for voter intimidation in 2008 because he didn’t believe it was possible for African Americans to be guilty of voter intimidation. Whose DOJ gave money to ACORN which was accused of voter fraud.

Holder has refused to investigate charges that the Obama political machine traded VIP access to the White House in exchange for campaign contributions – a scheme eerily similar to one hatched by Holder’s former boss, Bill Clinton in the 1990s. The Holder Justice Department also came under fire for dropping a voter intimidation case against the New Black Panther Party. On Election Day 2008, Black Panthers dressed in paramilitary garb threatened voters as they approached polling stations.

Holder has also failed to initiate a comprehensive Justice investigation of the notorious organization ACORN (Association of Community Organizations for Reform Now), which is closely tied to President Obama. There were allegedly more than 400,000 fraudulent ACORN voter registrations in the 2008 campaign. And then there were the journalist videos catching ACORN Housing workers advising undercover reporters on how to evade tax, immigration, and child prostitution laws.  And under Holder, the DOJ even paid money to ACORN.

Ken Melson, the acting director of the ATF, the Justice Department is obstructing the congressional investigation of Operation Fast and Furious, the ATF operation that allowed Mexican drug cartels to purchase and keep weapons from the United States. A report by the House Oversight Committee confirmed that cover-up. Holder even lied and blamed Fast and Furious on Bush.

Eric Holder is the poster guy for Attorney Generals being political, and his comment about AG Barr just continues his politics first policy.