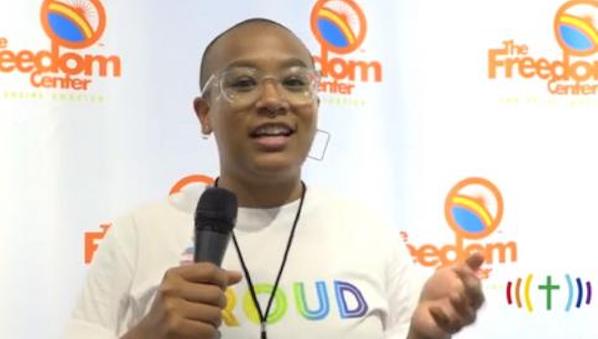 While the principal speakers at the DNC ignored law and order, there was one speaker who brought it up…but not in a way that will help the average Americans.  J Mai, a panelist at the Democratic National Convention (DNC) called for a complete end to law enforcement – from the police to ICE, to prisons in general.

This, as the Democrat party, has tried to distance themselves from the ‘defund the police’ movement seeping out of their more radical factions.

The person spoke during the DNC’s LGBTQ caucus roundtable and did their own version of John Lennon’s ‘Imagine.’

Why can’t people imagine a world without law enforcement? Perhaps people want to live in a world where they feel free to raise their families safely. People don’t want to imagine a world of anarchy and lawlessness, maybe? That would be my best guess.

What could possibly go wrong?

This panelist’s views on law enforcement used to be outside any mainstream party, but are a consistent part of the Democrat platform nowadays.

Last month, Representatives Rashida Tlaib and Ayanna Pressley, two members of the Democrat ‘Squad,’ unveiled legislation brought forth by a group seeking to “abandon” police, prisons, and any form of punishment for lawbreakers.

“History is clear that we cannot achieve genuine safety and liberation until we abandon police, prisons, and all punishment paradigms,” the group – the Electoral Justice Project for the Movement for Black Lives (M4BL) – states.

Shortly after that, Democrat nominee Joe Biden declared he would “absolutely” divert funds from police because some have “become the enemy.”

President Trump has blasted Biden for being little more than a placeholder for extremists in his party should he win the White House.

“Joe Biden is the puppet of left-wing extremists trying to erase our borders. Eliminate our police. Indoctrinate our children. Vilify our heroes,” Trump claimed. “You know all about that.”

The President has been visiting battleground states in the Midwest, delivering a message of law and order, which is diametrically opposed to the DNC’s platform.

Her Wake, Forrest University bio, shows panelist, Ms. Mai fits comfortably into the far-left Democratic Party. She is described as:

J Mai (they/them) is a Black-Vietnamese, transgender nonbinary/gender transcendent mermaid Queen-King currently living out their ever-evolving truths in Winston-Salem, NC. A recently licensed minister in the Progressive National Baptist Church, J received their Bachelors in Sociology and Women, Gender, Sexuality Studies at Wake Forest University and is currently working towards a Masters in Divinity at Wake Forest University School of Divinity