Ken Cuccinelli Is Right About Statue Of Liberty And Lazarus’ Poem, Liberals Are Totally Wrong 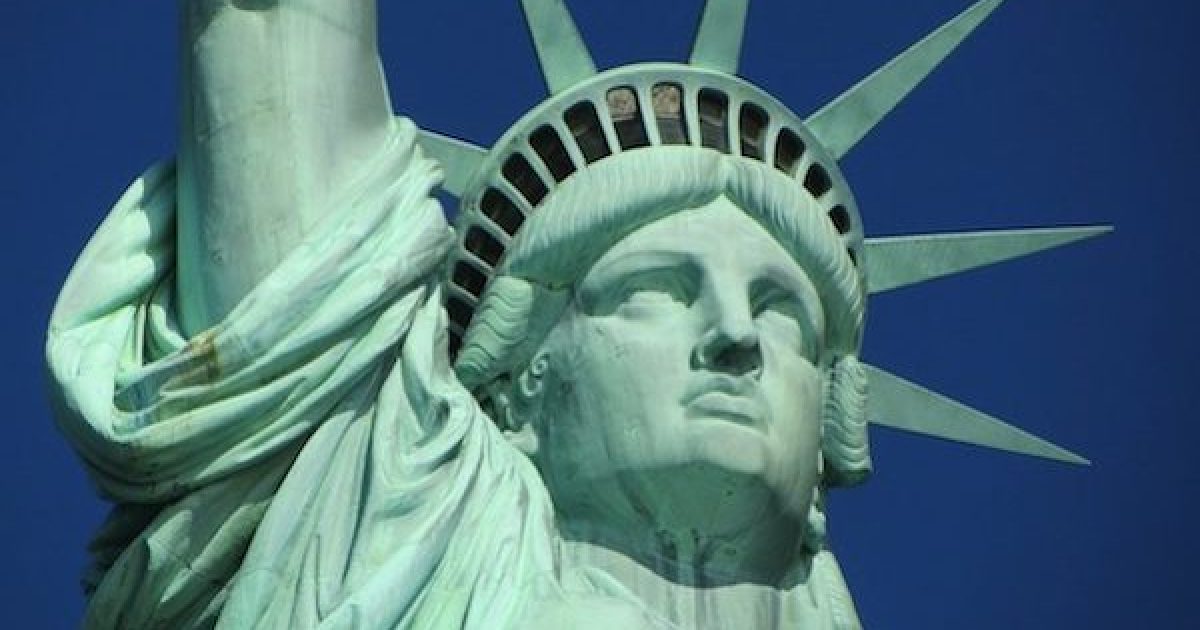 Once again, it’s time for the liberals and the media to spin the truth about The Statue of Liberty, and the Emma Lazarus poem “The New Colossus.” The lady in NY harbor is arguably the most recognizable landmark in the U.S. It was erected to represent freedom and the end of slavery and has nothing to do with immigration. Not that one would know it one listens to liberals or the media. “The New Colossus” by Emma Lazarus is a beautiful poem written by a nice Jewish girl, but the only reason it is on a plaque inside the statue is one of her friends wanted to honor her after she passed away.

What caused the liberal freak out was a Tuesday NPR interview with Ken Cuccinelli,  acting Director of the Citizenship and Immigration Service. Cuccinelli was asked if he thought that Emma Lazarus’ words etched on the Statue of Liberty – give me your tired, your poor – are also part of the American ethos? Perhaps flippantly (I didn’t hear the interview) Cuccinelli answered, “They certainly are – give me your tired and your poor who can stand on their own two feet and who will not become a public charge.”

Based on the liberal reaction, one would think Ken Cuccinelli changed the words of the Bible because people went nuts.

Later that day on CNN he was asked about his earlier comments and added, “Of course that poem was referring back to people coming from Europe where they had class-based societies, where people were considered wretched if they weren’t in the right class,”

He’s right. In the late 19th century if one lived in Europe and weren’t part of the aristocracy, you were considered wretched and did not have the freedoms of the upper class. The poem was an invite to those wretched people wanting to be free. The people who were desperate for an equal opportunity to work hard and be successful. It didn’t mean “come to America and get free stuff,” that was never the immigration policy of the U.S.

The Cuccinelli comments were called racist, and liberals on twitter began using the hashtag #CuccinnelliResign. The liberals who are going mad over Cuccinelli’s need to switch to decaf because they don’t have any idea of what they are talking about.

Fist of all, it’s called the Statue of Liberty, not the Statue of Immigration.  The reason it was built and presented to the United States has nothing whatsoever to do with immigration. The idea for the statue was conceived by French abolitionist Edouard de Laboulaye, the president of the French Anti-Slavery Society as a celebration of President Abraham Lincoln’s emancipation of the slaves, the end of the Civil War, and the abolition of slavery. Indeed, since it was a celebration of the end of slavery, African Americans have more of a right to claim the Statue than immigrants do. De Laboulaye hired sculptor Frédéric Auguste Bartholdi to begin planning what would become the Statue of Liberty.

Even its official name shows it has nothing to do with immigration. The name “the Statue of Liberty’ is really a nickname. Its official name is “Liberty Enlightening the World.” Her torch wasn’t there to welcome immigrants, it was supposed to send America’s tradition of personal freedom to the world, to celebrate American republicanism (not the party, the concept), not its immigration policy. There was nothing about welcoming anyone, nothing about borders, or poor people, or bringing any “huddled masses” anywhere.  Nor was there anything about allowing people to come into the country illegally.

As for Emma Lazarus’ sonnet, initially, the poem was only tangentially connected to the famed statue. Emma Lazarus, who wrote “The New Colossus” in 1883, donated the poem to an auction of art and literary works conducted by the Art Loan Fund Exhibition in Aid of the Bartholdi Pedestal Fund to raise cash for the Statue of Liberty’s pedestal. 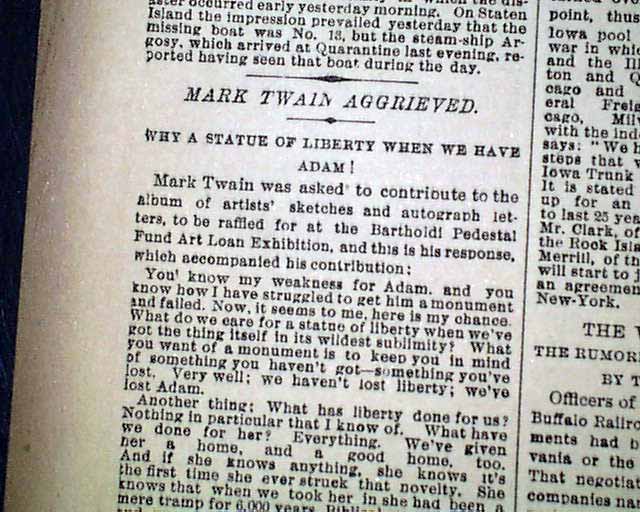 Twain’s Fund Raising Essay Was Printed In The NY Times

There were many other donations for the auction. Mark Twain submitted an essay to the fundraiser. It was written with the usual Twain biting wit and called “Why a Statue of Liberty When We Have Adam!” It said in part:

What do we care for a statue of liberty when we’ve got the thing itself in its wildest sublimity? What you want of a monument is to keep you in mind of something you haven’t got—something you’ve lost. Very well; we haven’t lost liberty; we’ve lost Adam.

(…) Another thing: What has liberty done for us? Nothing in particular that I know of. What have we done for her? Everything. We’ve given her a home, and a good home, too. . .

(…) What have we done for Adam? Nothing. What has Adam done for us? Everything. He gave us life, he gave us death, he gave us heaven, he gave us hell. These are inestimable privileges – and remember, not one of them should we have had without Adam. Well, then, he ought to have a monument

Maybe Mark Twain had a point.

After the auction neither “The New Colossus” or the Biblical Adam had anything to do with the statue.  When “Liberty Enlightening the World.” was dedicated in 1886, the poem wasn’t read. It wasn’t even officially published until 1901 when both The New York Times and the New York World printed it on their pages.“ Lazarus died a year later of Hodgkin’s Disease, her poem was forgotten.

Seventeen years after the statue was dedicated and the year after she passed away Lazarus’s friend Georgina Schuyler raised enough money to engrave the verses on a bronze tablet and place it inside the Statue of Liberty base to honor his friend. Think about it, though! Mark Twain didn’t die until 1910. If he passed away a decade earlier, people might be talking about the Statue of Liberty displacing the biblical Adam.

Throughout our history, America has had many, different immigration policies before the statue was built, and since it was dedicated.  There are many examples where America has created specific limits or even outright temporary bans on groups of foreigners.

In 1882, for instance, President Chester Arthur signed the Chinese Exclusion Act. This legislation banned “skilled and unskilled laborers and Chinese employed in mining,” and it kept them from entering the U.S. for 10 years. It even put restrictions on Chinese people who were already here, forcing them to get work permits and other requirements. It was extended another ten years in 1892, but the bias really didn’t fade until the U.S. entered WWII when China was fought on our side.

Speaking of WWII, Democratic President FDR failed to take relatively simple measures that would have saved significant numbers of Jews during the Holocaust because his vision for America was one that had a small amount of Jews. In other words, FDR doomed many Jew to suffer not because he wanted them to die, but because he didn’t want a lot of Jews living in his neighborhood.

Our other presidential Roosevelt, Teddy, also put a ban on a group of immigrants. In 1903 Teddy Roosevelt banned people he feared were anarchists. This was during a time when anarchists were bombing targets all across the U.S. and killing Americans.

In 1950, Congress passed a ban on communists, and Jimmy Carter banned Iranians during the Iranian Hostage Crisis in 1980, but no one complained.

And all this doesn’t mention the restriction placed on those coming in through Ellis Island or elsewhere in America. Immigrants were turned away for various reasons including if they were physically or mentally ill in any way, had a criminal record or if they didn’t seem like they would be able to have a job in America. Ellis Island was sometimes known as “The Island of Tears” or “Heartbreak Island” because some of the immigrants who were turned away had to take that long boat ride back to where they came from. When only one member of a family was sent back, it meant that families would be separated.  So family separation started long before Obama did it.

So, when liberals start screaming that Ken Cuccinelli is a racist because he was flippant with words written almost two decades after the Statue of Liberty was dedicated, or claim that Trump is a racist for enforcing the laws passed by congress. Remember that they haven’t a clue what they are talking about. And also remember that the plaque inside the statue could have been a salute to Adam.