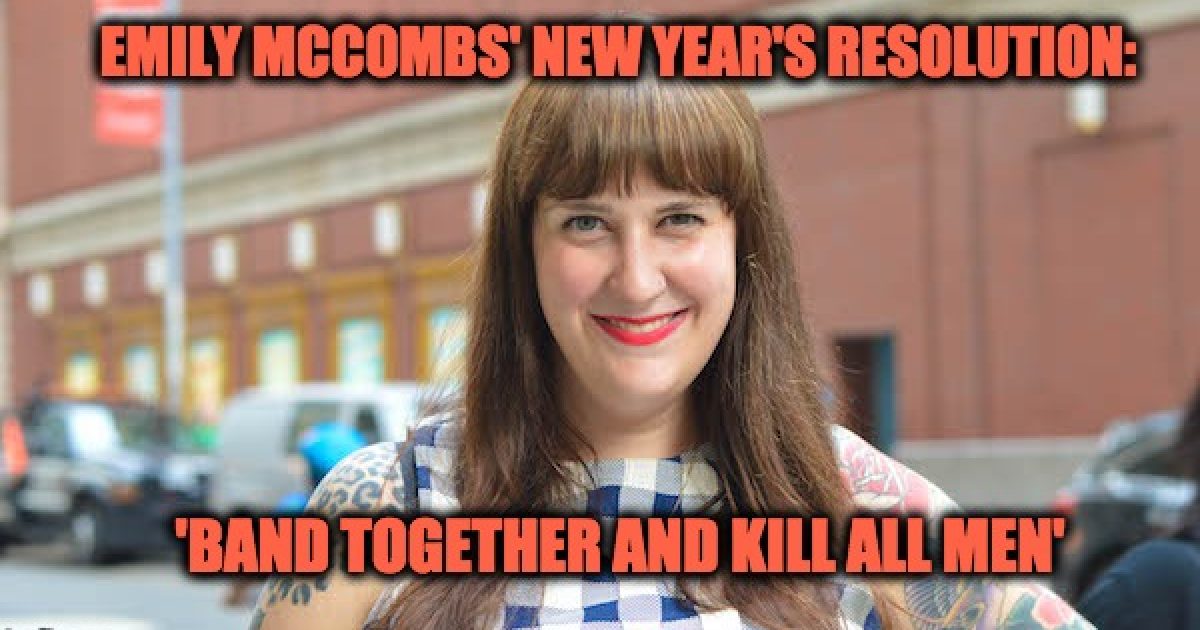 One of the resolutions was to cultivate female friendships. That sounds harmless enough until you read her second resolution, which seems conditional on the first: Band together to kill all men.

The tweet was deleted, but not before it was captured for posterity in tweet-backs, including this one:

The deleted tweet was also archived and can be seen here.

According to the Daily Caller (edited for language):

McCombs, who serves as the “Editorial Director of Parents” for HuffPo, previously wrote an article in November titled, “I Don’t Know If I Can Raise A Good Man.”

She can’t if she kills him.

In the post, she talks about her own son, saying, “(o)f course, we all want to raise feminist sons. I wrote an article a few months ago detailing the ways I try to do just that. But my efforts are starting to seem like grains of sand against a steady wave-crash of misogyny and rape culture.”

She continues, “In my previous article, I wrote, ‘In my sweat-soaked, sit-straight-up-in-bed feminist nightmares, I can imagine a future in which my own spawn makes some woman feel as voiceless as the boys in my high school once did, a world in which he blithely argues against the existence of male privilege and sh*t-talks the latest all-female remake on Twitter.’ Lately, I can imagine it even more clearly.”

Or you’ll go all Drexel Professor and have to resign from your job for threats from “controversial tweets” about wanting people dead.

Because it was just a joke after all.

Or is it Emily?

Told a female editor at @HuffPost that she is a role model for young girls and so ought to think twice about saying “kill all men”. This warranted being blocked. I guess debate really is dead on the left, I’ve been exiled from the echo chamber. #Misandry pic.twitter.com/dvtqJMu8in

The Daily Caller notes it’s not the first anti-male tweet she’s issued. Here are two more that are “protected” from unauthorized users:

Filed my nails into sharp little points last night so that I may spear and devour the hearts of men.

Can we have a day without men tomorrow?

I’d settle for a day without some bloodthirsty, hate-filled liberal calling for people to be killed.

In February 2011, I first wrote that liberalism, at its core, is an ideology of rage and hate. Sadly, leftists like McCombs prove that assertion correct on just about any given day.

Exit questions: 1) Does the HuffPost endorse this display of hate, and 2) Why hasn’t Twitter slapped McCombs for this clear breach of its policies? Could it be because she’s a liberal and has a blue check-mark by her name?