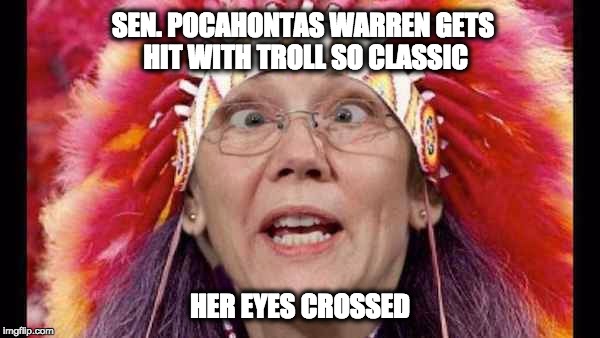 If the Guinness Book of World Records compiled records for trolling, V.A. Shiva Ayyadurai, one of the GOP challengers for the U.S. Senate seat by Elizabeth Warren (D-MA) would not only be recorded in that book, but in a trolling Hall-of-Fame.  Mr. Ayyadurai,  sent Warren, whose claim of having a Native American background was exposed as fraudulent, a gift-wrapped 23 & Me DNA test kit for her birthday.  Unfortunately, he said, she refused it and sent it back.

During her first run for the Senate Elizabeth Warren was exposed for lying about her background.

Of course after being exposed, Warren claimed that she didn’t know Harvard had used her unconfirmed heritage to appear more diverse. Warren also denied that she ever used her unproven lineage to gain a professional advantage. Instead of coming clean in 2012 during the height of the controversy, Warren continued to spin her Indian fairy tale

“I am very proud of my heritage,” Warren told NPR in 2012. “These are my family stories. This is what my brothers and I were told by my mom and my dad, my mammaw and my pappaw. This is our lives. And I’m very proud of it.” She can’t be too sure of her heritage, after all she lies about it.

Warren’s proof of her Native American heritage…well she has high cheekbones.

Sending Warren the DNA test kit was the perfect troll, because without getting nasty about it V.A. Shiva Ayyadurai reminded Massachusetts voters that Elizabeth Warren is a “digvtsugi” which is Cherokee for liar,

The video below is from the Fox News report on Mr.Ayyadurai’s classic troll.