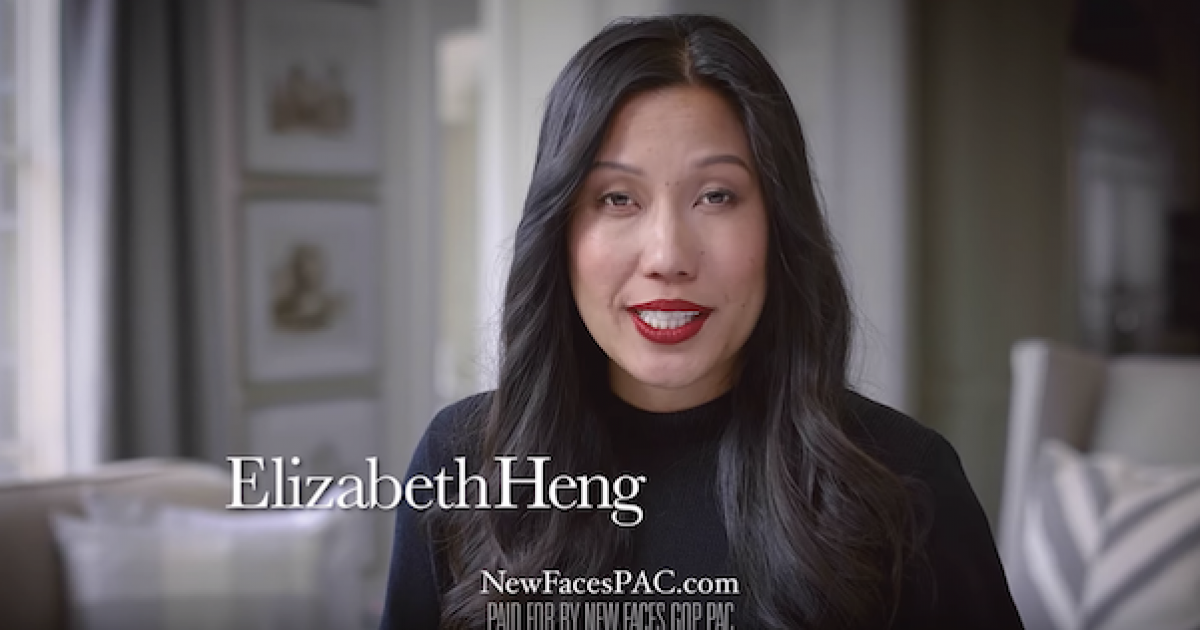 “This is horrifying to watch,” Omar tweeted on Friday. “When will the Republicans learn how to offer ideas and solutions without stroking fear and inciting violence?”

“Enough is enough. They need to pull this garbage off the air and issue an apology to @AOC,” she added.

This is horrifying to watch.

When will the Republicans learn how to offer ideas and solutions without stroking fear and inciting violence?

Enough is enough. They need to pull this garbage off the air and issue an apology to @AOC. https://t.co/pxSW0iUgSR

A bit of mendacity from the Congresswomen whose anti-semitic statements were whitewashed by the Democratic Party.

Exactly my thoughts. The mere act of burning her image is a display of violence. Folks need to stick to facts & policy positions. They need to stop fear mongering & more importantly demonizing members of Congress. FYI: No one puts her residents (and our planet) first, like @AOC https://t.co/K2Qz1N0PeN

Former Congressional Candidate Elizabeth Heng’s parents, are refugees from communist Khmer Rouge Cambodia and has heard first hand the horrors of socialism. The Cambodian Civil War, which ended in 1975, killed an estimated 275,000–310,000 people and displaced two million others from rural areas.

So it is not a surprise that Ms. Heng has dedicated herself to warning America about the dangers of socialism. During her 2018 Congressional campaign, facebook pulled one of her campaign ads because it had images from the Khmer Rouge horrors, claiming because they deemed it “shocking, disrespectful or sensational. Heng responded then, “I’m sure it is shocking for some people to hear about this kind of injustice, but this is reality. This is why I wake up every single day with the fight and determination to have a voice and make a difference in my community,”

The purpose of the ad is to remind people of socialism and that it often leads to violence against its population.

“This is the face of socialism and ignorance. Does Alexandria Ocasio-Cortez know the horror of socialism?” Heng asked at the beginning of the video.  Following that introduction,the picture of AOC’s face burns away to show a horrific scene from the Khmer Rouge genocide in Cambodia.

“My father was minutes from death in Cambodia before a forced marriage saved his life. That’s socialism. Forced obedience. Starvation. Mine is a face of freedom. My skin is not white. I’m not outrageous, racist or socialist. I’m a Republican,” Heng said.

AOC answered with the traditional liberal response, she’s a racist.

Know that this wasn’t an ad for young conservatives of color – that was the pretense.

What you just watched was a love letter to the GOP’s white supremacist case. https://t.co/zvp1EB02c5

Heng of course responded with truth:

Not Republicans. Me. Are you really calling me a racist @aoc? I’m calling all Democrats out for supporting an evil ideology. Or are you just in Congress to hang out with celebrities and tweet out ridiculous ideas like the green new deal? https://t.co/w985LYjIZd

This ad is about fighting the socialist agenda that has taken over the Democratic Party . I am not afraid to engage in a debate of ideas, and it is the AOC extremists that have to resort in name calling because they don’t have real solutions for our country

Earning his nickname, Fredo Cuomo told Ms. Heng on CNN that she should be attacking President Trump not the socialists in America.

As reported in these pages before, during the 20th-century, socialist/communist governments murdered at least 94 million people. AOC is trying to introduce socialism to the United States. Elizabeth Heng is trying to prevent the socialist wave of death from happening here.

Below is the ad Reps Omar, AOC, and Tlaib, along with Fredo Cuomo, and others objected to: