Say Hi To The Generalissimo For Me Guys 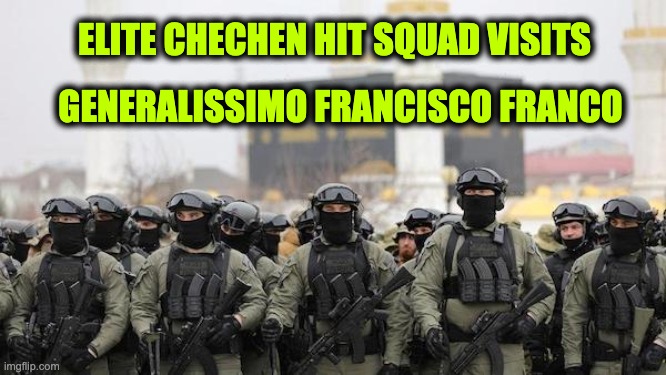 The infamous elite Chechen hit squad can now answer a historical question that many people ask. No, it’s not “where was the garden of Eden?” It’s much more important than that. The question people ask is, “Is Generalissimo Francisco Franco still dead?”

Note: if you don’t know why that’s an important question, check out the first year of Saturday Night Live. The elite squad can find the answer because they’ve been “eliminated,” which is a nice way of saying, “Those SOBs got what they deserved.”

One of the more reprehensible actions by the Ruskies since their invasion of Ukraine was sending that elite Chechen hit squad was sent to assassinate Ukrainian President Volodymyr Zelensky and his family.

“I can say that we received information from representatives of the FSB, who today have no desire to take part in this bloody war,” said  [National Security and Defence Council chief ] Danilov, who claimed that the Chechen special forces sent to kill Zelensky had been “eliminated.”

Say hi to the Generalissimo for me, guys.

“The Kadyrovites’ elite group, which came here specifically to eliminate our president, was directly destroyed,” he said. Kadyrovites refers to a Chechen paramilitary group accused of a number of human-rights violations and abuses. They serve at the pleasure of Razman Kadyrov, the head of the Chechen Republic and a close ally of Vladimir Putin.

Close ally is a nice way of saying Kadyrov is Putin’s wench. Chechnya became independent after the breakup of the USSR but was taken over by Russia in 2000.

There is no word on whether the Ukrainian soldiers who eliminated the hit squad were ordered to leave their guns but take the cannolis. The bottom line is If the hit squad was really as elite as advertised,  they would be very embarrassed because they got found out. But they can’t be ashamed anymore because they are too busy are hanging out with Generalissimo Francisco Franco, who I hear is still dead.