They Elected A Wife-Beating, Socialist, Racist, Jew-Hater, Who Covered Up Child Abuse As Their Senator 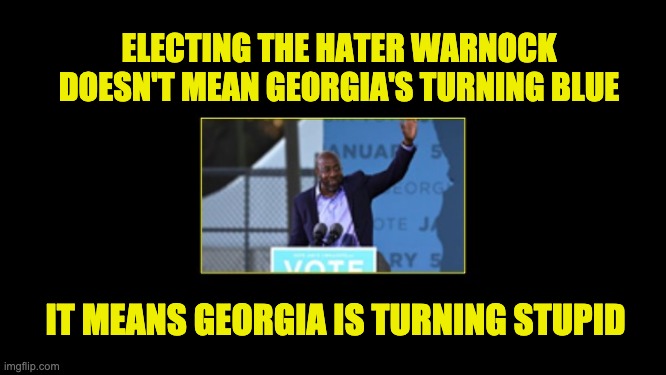 This has nothing to do with his policies–how did anyone in Georgia vote for this jerk? The MSM is claiming that electing Warnick is an indication that Georgia is turning blue.  Warnock is a wife-beating, socialist, racist, Jew-hater, who covered up child abuse. And he’s not a fan of the United States either. The man won despite the fact that he hates more people than he likes. Warnock has pontificated against America, white people, Jews, people who served in the military, law enforcement, and more.

Electing this hater doesn’t prove that the state is turning blue, or even purple. It’s an indication that many Georgia voters have turned crazy or stupid. They elected a man dedicated to spewing hatred–here are just a few examples:

On The People who Protect America

How To Handle A Woman?

On Jews And Israel

I don’t get it! How can he be the Ebenezer Baptist Church’s senior pastor, the former congregation of Martin Luther King Jr? How can they accept someone who preaches hatred? The exact opposite of the Reverend King. Someone who spews that much hatred has no business preaching to any church! He is a Reverend in the tradition of Al Sharpton–a bigoted hater.

How did anyone vote for this misanthropic a-hole?  Have the people of Georgia become mad? Or Stupid? Raphael Warnock is not the kind of person who should serve in the government. Heck, a hater like him shouldn’t be allowed in public. How can he serve a public comprised of so many people he hates? He can’t!  But the people of Georgia elected him anyway.