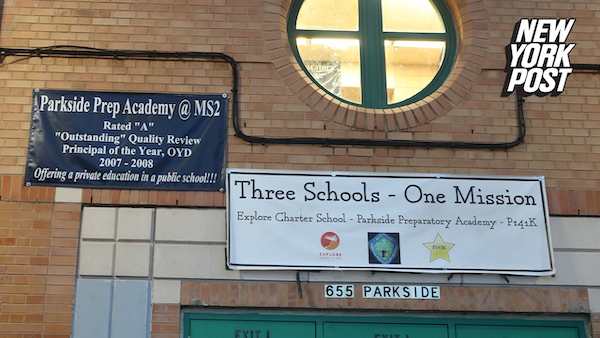 What is a middle school principal to do when her kids aren’t learning? education Brooklyn style cheating

Adrienne Spencer, principal of Parkside preparatory academy since 2003, is accused of handing out embargoed exams to teachers, who then used them to coach kids before they took the tests.

I guess the pressures of leading a middle school are getting out of hand in America.

A Brooklyn middle-school boss gave students a leg up on tough city and state exams — by cheating, whistleblowers told The Post.

Adrienne Spencer, principal of Parkside Preparatory Academy since 2003, is accused of handing out embargoed exams to teachers, who then used them to coach kids before they took the tests.

“I know what she was trying to do was unethical,” said Addam Amauri Jones, a Spanish teacher at the Prospect-Lefferts Gardens school who claimed his refusal to take part in cheating on a citywide Spanish exam cost him his job.

The Department of Education dismissed the cheating allegations as unfounded, despite smoking-gun evidence:  One teacher took time-stamped photos of “practice” questions that appeared on the official exam days later.

Shrink-wrapped state math exam booklets for grades 3 to 8 were delivered by testing vendor Questar on April 10 to 12 — more than two weeks before the exams were given citywide May 1 to 3, records show.

Valentine said she reported it immediately to an assistant principal. “Nobody came upstairs to the classroom. Nobody asked the child to take the copy out of his bookbag. No one asked me what I saw.”

Acts like this is something of a tradition in Brooklyn. I am a math idiot.  My High School Algebra grade was in the high 90s, but geometry followed. I barely passed that. The worst came in junior year when I had to take trigonometry. It was high school hell, but I passed. Well sort of. The only reason I didn’t get a failing grade in trigonometry was that the boys in the Solomon Schechter School in Brooklyn (a Jewish day school) stole the trigonometry regent’s exam (the NY State-wide test) and it was canceled. My teacher gave me a mercy grade and passed me. They also stole the English and Biology exams, but I would have done well on those tests.

Those boys from Brooklyn will have a special place in my heart till my dying day. Well, they didn’t steal the entire test, just the answers. They were also capitalists.  After they swiped the answers, they sold them at prices ranging from $20 to $40 a test. That’s how they got caught, they sold the answers to the wrong people and got expelled, but I passed trigonometry.

The big difference between what happened in 1974 and today is the Solomon Schechter principal suspected that someone had tampered with the lockbox where he kept the state-wide exams and alerted the authorities. In the most recent Parkside preparatory academy case, it was the principal who was behind the scam. 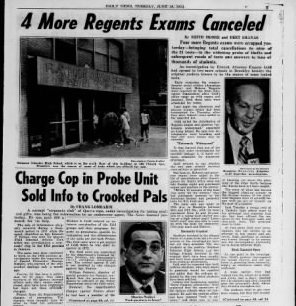 Why don’t we focus on teaching kids instead of teaching kids to cheat? Today’s curricula, at least in the districts my kids went to school, are designed to teach the kids to pass specific exams. It would be so much better for the education of our children to teach them the subject. Then the staff would not feel the pressure to help them cheat on exams.

Much of this post was first seen at DC Clothesline