Seattle’s Leftist Mayor Has Had Enough Of Socialist Councilwoman Sawant 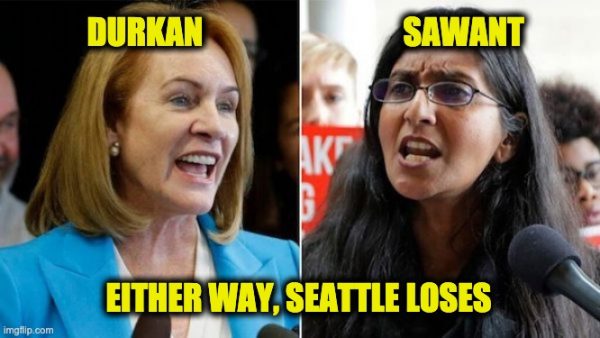 In a scathing letter to Seattle City Councilwoman Lorena Gonzalez, Mayor Jenny Durkan has called for an investigation of Socialist Councilwoman Kshama Sawant to determine whether she should be sanctioned or even removed from her council position. The two-page letter is embedded below.

Sawant has been an outspoken critic of Mayor Durkan and is supportive of the current protest movement that has seized six blocks of residential and business property on Capitol Hill, calling it the “Capitol Hill Occupied Protest” (CHOP) zone.

Fox News interviewed Seattle Police Officers’ Guild President Michael Solan Tuesday. He issued a warning about what happens when—as it has in Seattle—an area is allowed to become “police free” as is the CHOP zone on Capitol Hill. There have been four shootings and two people killed in the CHOP zone the past two weekends.

According to Durkan’s letter, Article IV, Section 4 of the city charter allows “provides the Council may punish or expel a member for disorderly or otherwise contemptuous behavior.” In the letter to City Council President Lorena Gonzalez, the mayor argued that Sawant, a self-described socialist, is using her position as a city official “in violation of law” and for “recklessly” undermining other people’s safety “for political theatre.”

The people whose safety was undermined were the Mayor and her family.  Durkan wrote that Sawant led a crowd of protesters to Durkan’s home and delivering a speech outside, “All of us have joined hundreds of demonstrations across the city, but Council Member Sawant and her followers chose to do so with reckless disregard of the safety of my family and children,” Durkan wrote.

Just imagine if Durkan cared as much for the people who lived and worked in the CHOP zone and found themself living inside an occupied part of the city.

In the wake of a fatal shooting early Monday in the CHOP zone—in which a 16-year-old was killed and a 14-year-old was seriously wounded—Sawant contended that the area experienced violence long before CHOP was established. But a Seattle Times look at crime in that neighborhood tells a different story. The newspaper said the neighborhood experienced three homicides in all of 2019, and there hadn’t been a 2020 killing there until CHOP was occupied three weeks ago.

06.30.20 Letter to Council President Gonzalez by Jeffrey Dunetz on Scribd