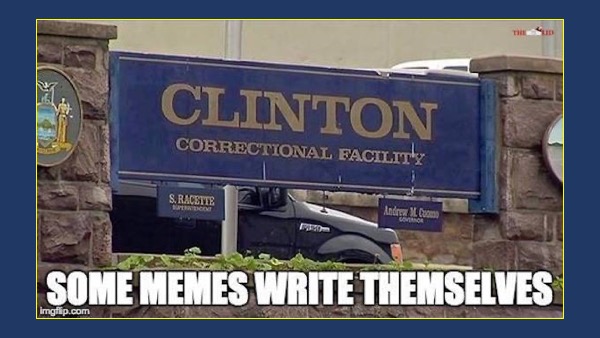 Hillary Clinton may want to move into Joe Biden’s secret basement to hide. Today it was revealed that US Attorney John Durham investigation into the origins of Russiagate has raised questions about the Clinton Foundation. To answer those questions, Durham is expanding his probe to include the Clinton Foundation (maybe he saw a copy of Peter Schweizer’s great book Clinton Cash on someone he was investigating’s desk). He has also absorbed the responsibilities of the missing Huber report into his investigation.

According to a report from The New York Times, Durham has pursued documents and interviews about how federal authorities handled their probe into the pay for play at the State Department using the Clinton Foundation.

Fox News has reported that Durham is incorporating the long-expected examination of the foundation by US Attorney John Huber into his probe. It is almost three years (Nov. 2017) since Huber was named by then-Attorney General Jeff Sessions to evaluate “certain issues” involving the sale of Uranium One and other dealings connected to the Clinton Foundation.

Huber was also tasked with reviewing the FBI’s handling of the Clinton email probe, including allegations that the Justice Department and FBI “policies or procedures” were not followed.

It has been unclear, for years, the status of Huber’s investigation, but another source told Fox News Thursday that Huber has faced mounting criticism from the Justice Department and White House over his progress.

“There are folks that are aware of the fact that Huber has not done much, and there has been criticism at the Justice Department and the White House,” the source said. “Folks that have been concerned about what he did or didn’t do, and many of them feel that Huber did not dig deep enough or work hard enough.”

True…three years is a long time to reveal nothing–not even that everything was on the level.

The Times report suggested that Durham is looking at whether the investigators in the Russia probe flouted laws or policies — and that they were comparing the FBI Russia probe to the Clinton Foundation investigation.

“The Clinton Foundation has regularly been subjected to baseless, politically motivated allegations, and time after time these allegations have been proven false,” the foundation said in a statement to the Times.

No, They haven’t been proven false. The allegations have never been thoroughly investigated. During the summer before the 2016 election, word leaked that four field FBI offices had opened preliminary inquiries into the State Department’s policies vis-à-vis the Clinton Foundation’s donors. But according to reports at the time, they were stymied by top management, “Some rank-and-file agents interpreted cautious steps taken by the Justice Department and FBI headquarters as being done for political reasons or to protect a powerful political figure.”

It will be interesting to see what Durham comes up with about Russiagate and/or Hillary. Whatever it is, it will be truthful. Despite what we hear from the Democrats, AG Barr would never try to influence an investigation because of politics. And from Durham’s reputation, he would never listen to anyone who tried anyway.