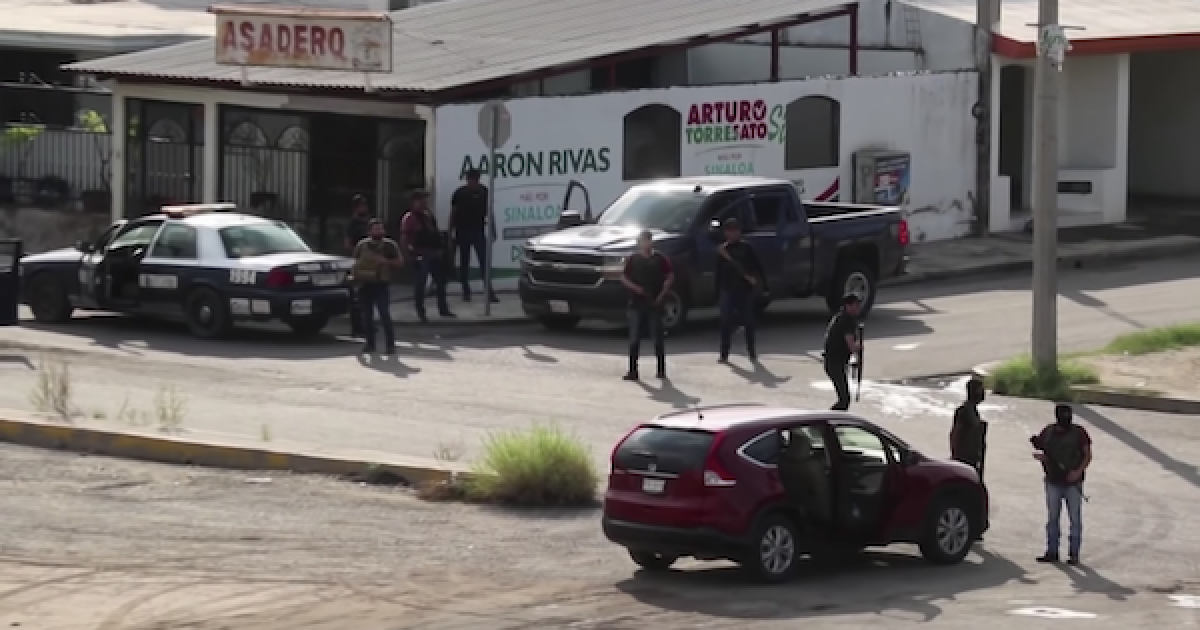 Do AOC, Pelosi, and Schumer ever talk about the huge cash injection their open borders policy gives to the Mexican Drug Cartel Crime Lords? Of course not.

El Chapo is tucked safely away (so far as we know) in a maximum-security prison. He was bad news, so bad that he is said to have ‘owned’ the Mexican President himself.

“You gave a story that Mr. Guzman paid a bribe to Mr. Peña Nieto of $100 million,” Chapo’s lawyer Jeffrey Lichtman asked Alex Cifuentes during cross-examination in Brooklyn federal court, referring to his previous discussions with US authorities.

The bribe allegedly took place in October 2012 — which was after he was elected but before he took office in December that year.
Source: NYPost

But when Mexican authorities arrested TWO of El Chapo’s SONS recently, all HELL broke loose in Mexico, as they turned Mexico into a warzone in their effort to get him released — highlighting just how out of control these cartels have gotten.

El Chapo's son was captured by Mexican police the other day, then released after Sinola cartel overpowered them in gun battle.

Mexico is controlled by these cartels, who murder almost 30K people annually there.

Last Thursday in the city of Culiacan, the capital of Sinaloa state, a battle erupted between government forces and drug cartel gunmen after the Mexican military captured two sons of jailed drug kingpin Joaquin “El Chapo” Guzman. The elder son, Ivan, was quickly freed by his men, who overpowered government forces and secured his release. Ivan then launched an all-out siege of the entire city in an effort to free his younger brother, Ovidio.

…The ensuing scene could have been mistaken for Syria or Yemen. Footage posted on social media Thursday showed burning vehicles spewing black smoke, heavily armed gunmen blocking roads, dead bodies were strewn in the streets, and residents fleeing for cover amid high-caliber gunfire.

Armed with military-grade weapons and driving custom-built armored vehicles, cartel henchmen targeted security forces throughout Culiacan, launching more than one dozen separate attacks on Mexican security forces. They captured and held hostage eight soldiers, then kidnapped their families. Amid the fighting, an unknown number of inmates escaped from a nearby prison. At least eight people were killed and more than a dozen were injured.

The eight-hour battle ended when government forces, outgunned and surrounded, without reinforcements or a way to retreat, received an order directly from Mexican President Andres Manuel Lopez Obrador to release their prisoner and surrender. Lopez Obrador later defended this decision, insisting that his security strategy is working and saying, “Many people were at risk and it was decided to protect people’s lives. I agreed with that because we don’t do massacres, that’s over.”
Source: Federalist

Where are they getting the money to load up with that kind of firepower? Some of it is the drug trade itself, of course. But that’s hardly their only income stream. Consider this RAND report from April:

According to Rand, the smuggling of unlawful migrants from the Northern Triangle region to the U.S. generated between $200 million and $2.3 billion for smugglers in 2017. It said the wide range reflects uncertainty about the number of migrants that journey northward, their use of smugglers and the fees they ultimately pay.

Rand estimated that migrants or their handlers paid drug-trafficking organizations taxes, or pisos, of $30 million to $180 million for crossing through their territories in 2017.

Violence is rampant across Mexico. Earlier in the week, more than one dozen police officers were massacred in a cartel ambush in western Mexico. A day later, 14 suspected gang members were killed by the Mexican Army. Homicides in Mexico this year are on track to surpass last year’s record total of more than 29,000.

Understand that the fighting in Culiacan is not just another episode in the “drug war,” nor is it merely an incident of organized crime. What’s happening Mexico right now is more like an insurgency. Yes, drug-trafficking is one of the things the cartels do, but it doesn’t nearly describe what they are or what role they’re playing in the disintegration of civil society in Mexico. Indeed, over the past decade cartels have diversified their economic activities to include everything from oil and gas production to industrial agriculture to offshore commercial fishing.

In other words, it’s fair to say that Mexico is now on a trajectory to become a vast gangland governed more by warlordism than by the state. The last time this happened was a century ago, during the decade-long Mexican Revolution, which eventually triggered the invasion and occupation of northern Mexico in 1916 by the U.S. Army, including the mobilization of the entire National Guard and a call for volunteers. Before it was over, U.S. forces attacked and occupied Nogales, Sonora, in 1918 and Ciudad Juarez in 1919.

So ruthless cartels are getting the upper hand politically, economically AND militarily… and Pelosi, AOC & Co are stubbornly demanding we maintain a porous Southern border and our broken asylum process.

No time to talk about that, they’re too busy force-feeding us an impeachment scandal, whether we want it or not.

Our Own Resident Artist Doug Giles has released the latest offering in his MAGA series.

We finally have a Republican leader who’s ready to fight when it’s a ‘hill worth dying on’. He did it for Kavanaugh, he’s doing it again.

Trump is rebelling against the establishment’s demands that he bow the knee to public pressure. He wants that wall.

What better way to capture that ‘try and stop me’ attitude, than with a bonafide American Icon. Like Trump, this painting pulls no punches.