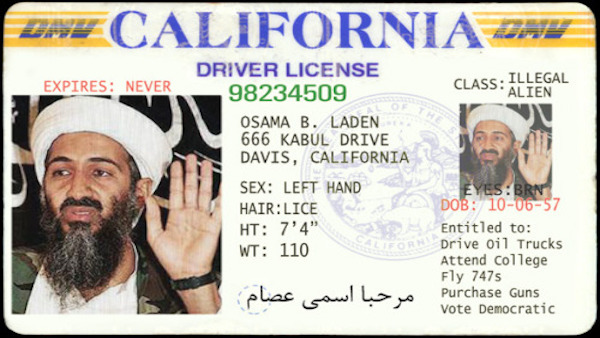 Trump’s Department of Homeland Security announced that it intends to review the various states that have passed laws allowing illegal aliens to attain state-issued driver’s licenses. drivers licenses to illegals

Because so many deep blue, Democrat-infested states have passed laws to allow for illegals to get licenses, the DHS is now looking to see if there is a way to invalidate the absurd laws by showing the harmful effects.

Not only do these legal documents give illegals the ability to use their licenses to vote illegally, but the documents also allow them many financial benefits they do not actually qualify for, as well.

In fact, in California, the state automatically registers people to vote when they get a driver’s license. And even though the state’s law is supposed to still exclude illegals from voting, California’s DMV already admitted that it has “accidentally” registered thousands of illegals to vote.

Thirteen states and the District of Columbia enacted laws to allow unauthorized immigrants to obtain a driver’s licenses. These states—California, Colorado, Connecticut, Delaware, Hawaii, Illinois, Maryland, New Mexico, New York, Nevada, Utah, Vermont and Washington — issue a license if an applicant provides certain documentation, such as a foreign birth certificate, a foreign passport, or a consular card and evidence of current residency in the state.

With all these growing problems, acting Homeland Security secretary Chad Wolf announced that DHS has initiated a study looking at the possible negative effects of allowing illegals to have legal driver’s licenses.

Wolf’s memo, which went to agencies including U.S. Customs and Border Protection and the Transportation Security Administration, follows a New York law authorizing licenses for undocumented immigrants [sic] and restricting data-sharing with federal agencies. Similar laws exist in a dozen other states, including New Jersey, which passed a similar measure in December.

Wolf wrote in his memo that the department needed to be “prepared to deal with and counter these impacts as we protect the homeland.” He also asks each recipient to take account of what Department of Motor Vehicles information is already available, and of any security consequences their operations could risk without that data, according to the AP.

To date, all the positive effects that liberals claimed the policy of giving illegals licenses would have on society have not come to pass.

Now the federal government is looking to lay out the case for just how bad these laws are.