She Fled Hong Kong Because 'I Know How They Treat Whistleblowers' 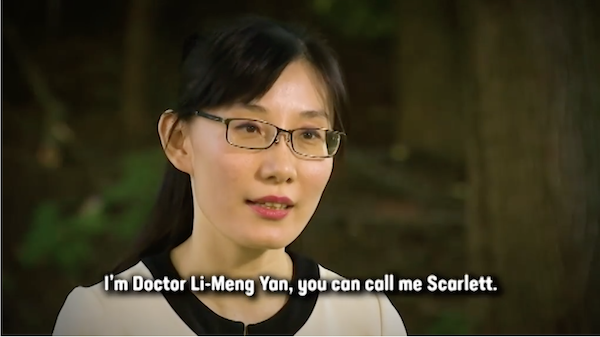 Dr. Li-Meng Yan, a respected virologist at the Hong Kong School of Public Health, who fled to the United States says Beijing knew about the novel coronavirus well before it claims to have known. Dr. Yan spoke to Fox News and said her supervisors, some of them known as the top experts in their field, ignored her research, which could have warned the world about CoronaVirus well before the outbreak spread from Wuhan.

Yan says she was one of the first scientists to study the CoronaVirus and reports that at the end of December 2019 she was asked by her supervisor at the University/WHO reference lab, Dr. Leo Poon – to look into an odd cluster of SARS-like cases in mainland China.

“The China government refused to let overseas experts, including ones in Hong Kong, do research in China,” she said. “So I turned to my friends to get more information.”

Yan had an extensive network of professional contacts in various medical facilities in mainland China, having grown up and completed much of her studies there. She says that is the precise reason she was asked to conduct this kind of research, especially at a time when she says her team knew they weren’t getting the whole truth from the government.

One friend, a scientist at the Center for Disease Control and Prevention in China, had first-hand knowledge of the cases and purportedly told Yan on Dec. 31 about human-to-human transmission well before China or the WHO admitted such spread was possible.

She reported some of these early findings back to her boss, Yan said.

“He just nodded,” she recalled and told her to keep working.

A few days later, on Jan. 9, 2020, the WHO put out a statement: “According to Chinese authorities, the virus in question can cause severe illness in some patients and does not transmit readily between people… There is limited information to determine the overall risk of this reported cluster.”

That, of course, was a lie as Dr. Yan’s research was done for the university and the WHO. After the January 9th announcement, her virology contacts who she had been talking about COVID with went quiet. Some of them warned Yan not to ask about details.

Then the numbers of human-to-human transmission began to grow exponentially, according to her sources, and Yan started digging for answers.

“There are many, many patients who don’t get treatment on time and diagnosis on time,” Yan said. “Hospital doctors are scared, but they cannot talk. CDC staff are scared.”

She said she reported her findings to her supervisor again on Jan. 16 but that’s when he allegedly told her “to keep silent, and be careful.”

“As he warned me before, ‘Don’t touch the red line,'” Yan said referring to the government. “We will get in trouble and we’ll be disappeared.”

Doctors who did “touch the redline” either died or disappeared.

Yan also says that Professor Malik Peiris, the co-director of a WHO-affiliated lab, also knew about the spreading virus but did nothing.

Eventually, U.S.-based Hong Kong blogger Lu Deh warned Yan that she and her family was in danger, and they should go to the United States where they would be safe. She decided to leave the country but her husband of six years who works at the same lab as Dr. Yan became angry because her work put him in danger and refused to go with her.

“He was totally pissed off,” she said. “He blamed me, tried to ruin my confidence… He said they will kill all of us.'”

She left Hong Kong on April 28th aboard a  Cathay Pacific flight and arrived at LAX thirteen hours later.

Below is a video of Fox News’ interview with Dr. Li-Meng Yan.