Dr. Fauci: President Trump’s Travel Ban Is What Will Save This Country From Becoming Italy 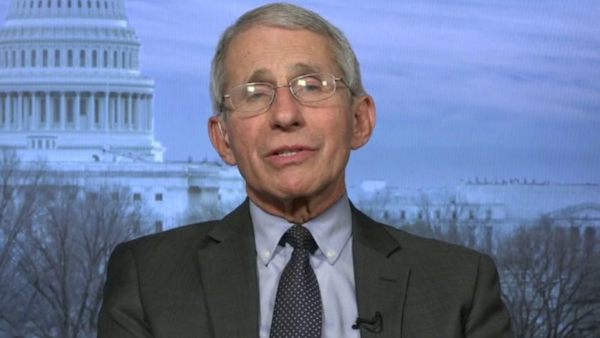 Dr. Anthony Fauci, director of the National Institute of Allergy and Infectious Diseases, claimed in an interview Sunday that President Trump’s travel ban may be a key to America not getting hit as hard by the coronavirus crisis as other nations.

Never forget that while congressional Democrats were singularly focused on impeaching the President in late January as news of the coronavirus spread, Trump was implementing a crucial travel ban blocking visitors from China, the source of the deadly contagion.

This, Fauci believes, may prove critical in keeping America from going down the path of Italy, which has the highest number of cases and deaths resulting from coronavirus in the world.

Praise for the President

Fauci, in a segment with CBS’ “Face the Nation,” expressed optimism that the United States will “not necessarily at all” end up like Italy.

Why? Because of that travel ban, Democrats tried to portray as a racist move by the President.

“Early on, they [Italy] did not shut out as well the input of infections that originated in China and came to different parts of the world,” the renowned physician who has worked with six different administrations explained.

Are we on the same trajectory as Italy in fight against #coronavirus? @NIAIDNews head Dr. Anthony Fauci says "Not necessarily at all."

He notes the country adequately shut out the input of the virus from China early on. "You can never keep up with the tsunami," he says. pic.twitter.com/cGAZ00lYTt

Dr. Fauci went on to explain that the ‘social distancing’ efforts touted by the White House and the restrictions on travel were crucial for keeping the coronavirus relatively at bay.

“The kinds of mitigation issues that are going on right now, the things that we’re seeing in this country, this physical separation at the same time as we’re preventing an influx of cases coming in,” said Fauci, “I think that’s going to go a long way to preventing us from becoming another Italy.”

It’s a testament to the President’s leadership that he implemented such a travel ban within days of the outbreak spreading, even in the face of impeachment. Even knowing the Democrats would label him a racist for doing so.

Reminder: While @realDonaldTrump was restricting travel from China back in January, Joe Biden was smearing him for being “xenophobic.”

Democrats Wanted to Ban the Ban

Despite an unparalleled expert in the field praising the travel ban, Democrats just two weeks ago were actively pushing to end the President’s authority to implement new restrictions.

Rep. Judy Chu (D-CA) alleged such bans “hurt families and hurt our national security, and we must stop this president from overextending his authority and banning people from entire countries.”

Unbelievable. There's a Coronavirus outbreak & Dems are playing politics with their partisan "No Ban Act" that would hamstring @realDonaldTrump's ability to halt flights from high-risk areas & protect us.

Their games put Americans at risk.

RT to tell Dems to pull this bill NOW! pic.twitter.com/7hwHvV4bfy

“This is no time for Donald Trump’s record of hysteria and xenophobia — hysterical xenophobia — and fearmongering,” Democrat presidential candidate Joe Biden said the day after Trump’s travel restrictions were imposed.

The resistance party’s reckless partisan politics are an attempt to smear President Trump and will end up costing people their lives.