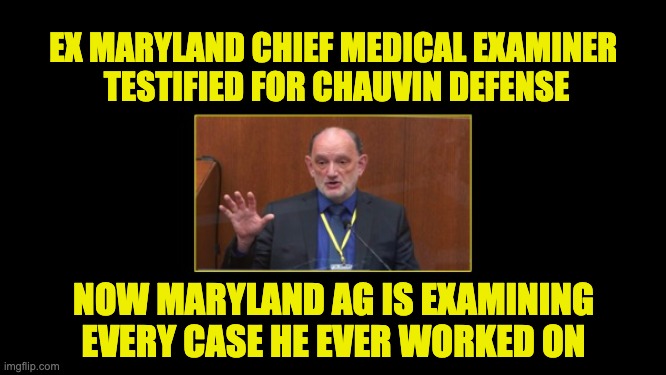 Can a person be said to have the right to a fair trial in witnesses for the ‘wrong’ side are punished for standing up and testifying when called to do so? Dr. David Fowler

Has the gangster ‘snitches get stitches’ mentality corrupted our legal system now, too?

Part of Chauvin’s legal defense (which, depending on the outcome of any appeals, may not yet be over) included the testimony of medical experts.

But one of the medical experts his lawyer called upon is now facing an investigation. Are we to believe it is a coincidence that this investigation is following hard on the heels of the Chauvin trial?

Dr. David Fowler, the former chief medical examiner in Maryland, is now having the body of work for his entire tenure — from 2002 until 2019 — reviewed by Gov. Larry Hogan and Attorney General Brian Frosh.

During the trial, Fowler, who was tapped by Chauvin defense attorney Eric Nelson to testify and provide his expert opinion, testified that Floyd’s cause of death could have been attributed to a myriad of factors. They include heart disease or the fact the Floyd was under the influence of drugs.

Fowler said that if he had been the medical examiner in Hennepin County, Minnesota, where Floyd died, he would have ruled his death as “undetermined.”

On April 23, Maryland Attorney General Brian Frosh and Gov. Larry Hogan said they would begin an investigation into Fowler’s tenure, from 2002 until 2019.

…The investigation into Fowler’s career could spark accusations that it’s politically motivated. Conservatives have argued that the guilty verdicts handed down against Chauvin were partially due to political pressure from Black Lives Matter protesters and some Democratic members of Congress. —

Really? A ‘spontaneous’ review of 17 years of work that just happens to coincide with the conclusion of this case?

BLM bragged that the riots and political pressure helped move the needle in this judgment. It could be that boasting is false but shows that they have a desire to corrupt our legal process. The other possibility is that they are right, and we no longer have an impartial justice system.

Are these Maryland politicians trying to disqualify this witness from testifying on behalf of Chauvin in any potential appeal? Are they trying to distance themselves from any of his rulings? Or are they simply trying to punish someone who undercut the official narrative?

If we missed a reasonable possible explanation, let us know in the comments.

We need people who will stand up and do the right thing even when it is politically unpopular to do so… like John Adams did for the Redcoats at the Boston Massacre.

Without that, we no longer have a justice system. In that scenario, any pretense of being anything other than a very powerful banana republic falls apart.