New proof It WAS a witch hunt 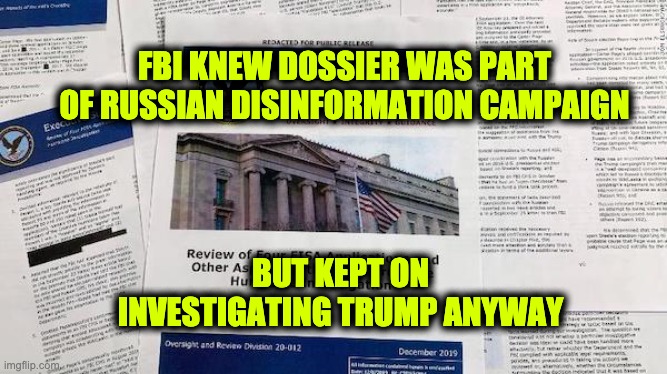 The document the FBI used to spy on Carter Page and to sell the investigation of the Trump campaign’s supposed involvement with Russia was in itself part of a Russian disinformation campaign.  Declassified footnotes in the Horowitz report show the FBI team looking into the Trump campaign learned in 2017 that essential parts of the Steele dossier were part of a Russian disinformation campaign.

Per Senate Judiciary Chairman Chuck Grassley (R-IA) who revealed the declassified information from the early part of the FBI Russia collusion investigation, the G-men learned that “information streams that flowed to the dossier were likely tainted with Russian Intelligence disinformation” But that didn’t stop the FBI from using the dossier or halting the investigation.

But the FBI aggressively advanced the probe anyway, ignoring internal oversight mechanisms and neglecting to flag the material credibility concerns for a secret court. Despite later intelligence reports that key elements of the FBI’s evidence were the result of Russian infiltration to undermine U.S. foreign relations, the FBI still pushed forward with its probe. It would eventually spill over into the years-long special counsel operation, costing taxpayers more than $30 million and increasing partisan divisions – all based on faulty evidence. In the end, the special counsel concluded that the Trump campaign did not collude with Russia.

Senator Ron Johnson (R-WI), Chairman of the Homeland Security Committee, explained that one of his staffers discovered the FBI malfeasance when first reading the classified version of the Horowitz report in a secure location when it first came out at the end of December.

Johnson and Grassley had been trying to get AG Barr and Director of National Intelligence Rick Grennell to declassify the relevant footnotes. As soon as they agreed to declassify parts of the footnotes, the two Senators revealed the truth they could.

The FBI knew that at least some of its evidence against the Trump campaign, and maybe more, was likely part of a Russian disinformation campaign—evidence from a source that was “central and essential” for getting the first FISA warrant. It isn’t clear what if anything the FBI did to determine whether their investigation was based in substantial part on Russian disinformation.

Yet the FBI assistant director in charge of the investigation, Bill Priestap, told the inspector general that as of May 2017 (when Robert Mueller took over as special counsel), the FBI “didn’t have any indication whatsoever” that their evidence was part of a Russian disinformation campaign.

Grassley explained what was in the four declassified footnotes and it ain’t pretty if one believes that justice should be fair:

According to Footnote 302, in October 2016, FBI investigators learned that one of Steele’s main sources was linked to the Russian Intelligence Service (RIS), and was rumored to be a former KGB/SVR officer.  However, the FBI neglected to include this information in its application, which the FISA court approved that same month. Two months later, investigators learned that Glenn Simpson, the head of Fusion GPS, told a Justice Department attorney that he assessed the same source “was a RIS officer who was central in connecting Trump to Russia.” In January, the FISA warrant was renewed.

Footnote 350 states that, in 2017, the FBI learned that intelligence reports “assessed that the referenced subset [of Steele’s reporting about the activities of Michael Cohen] was part of a Russian disinformation campaign to denigrate U.S. foreign relations.”

That same footnote states that a separate report, dated 2017, “contained information … that the public reporting about the details of Trump’s [REDACTED] activities in Moscow during a trip in 2013 were false, and that they were the product of RIS ‘infiltra[ing] a source into the network’ of a [REDACTED] who compiled a dossier of information on Trump’s activities.”

The surveillance warrant against Page was renewed two more times – in April and in June of 2017 – raising questions about when exactly the FBI received and reviewed these new intelligence reports, and what it did with them.

For years, the public was fed a healthy diet of leaks, innuendo and false information to imply that President Trump and his campaign were part of a Russian conspiracy to spread disinformation. The FBI’s blind pursuit of the investigation, despite exculpatory and contradictory information, only legitimized the narrative. The mounting evidence undercutting this narrative should have stopped the investigation early in its tracks. Instead, it took several years and millions in taxpayer dollars to conclude that the allegations were baseless,” Grassley and Johnson said.

“Had FBI leadership heeded the numerous warnings of Russian disinformation, paid attention to the glaring contradictions in the pool of evidence and followed long-standing procedures to ensure accuracy, everyone would have been better off. Carter Page’s civil liberties wouldn’t have been shredded, taxpayer dollars wouldn’t have been wasted, the country wouldn’t be as divided and the FBI’s reputation wouldn’t be in shambles.

All those times President Trump said the Russia investigation was a witch hunt he was telling the honest truth.
Sadly the FBI allowed itself to be led around by the nose by Russian intelligence with help from the Democratic Party, and the MSM in their successful attempt to divide the country.
Dossier Russian disinformation
Facebook Twitter Flipboard