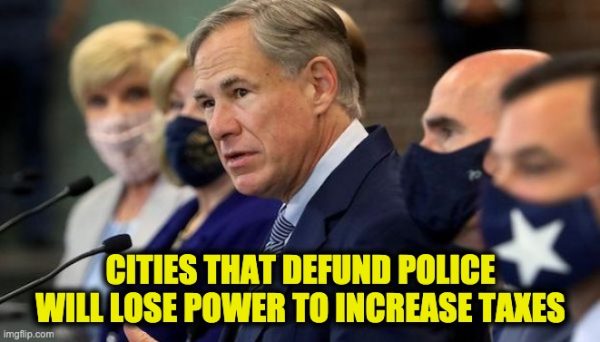 Sometimes, to get a person’s attention, you have to speak in their language. Gov. Abbott don’t defund police

So, what is the language of liberals? That’s an easy one. Political power.

With liberal activists bowing the knee to demands by activists who literally are hellbent on tearing down the existing system to put up a Marxist dystopia in its place, they think defunding the police is a great political move.

But these political opportunists might want to think twice before making a play that will significantly endanger the well being of the good citizens of major Texan cities. Their counterparts in ‘woke’ blue states like Oregon, Washington, California, or Illinois might have free reign to be stupid and politically reckless, but Texas is NOT a ‘woke’ blue state.

Texas will defund cities that try to defund their police.

If you go down that road of defunding the police and making their cities less safe, you can expect yourselves to be ‘defunded’ too.

Last week Austin City Council unanimously approved a proposal to cut the police budget by $150 million, about 34 per cent of its current total, and reinvest in other resources.

‘When crime is on the rise, the last thing we should do is defund the police,’ said Greg Abbott, the Republican governor, speaking at the Bob Bolen Safety Complex – the training facility and headquarters for the Fort Worth fire and police departments.

…He added that any city in the state that defunds police departments will have property tax rates frozen at their current level, according to Fox 26 Houston.

Cities that vote to defund police would not be able to increase property taxes under the legislation.

‘Cities that endanger residents by reducing law enforcement should not then be able to turn around and go back and get more property tax dollars,’ said Abbott.

He said that such cities were ‘more focused on political agendas than public safety.’

That would really upset those liberal-run cities. Everyone knows how much liberals like to increase taxes.

““The unwarranted attack by the Austin mayor and city council on their police department’s budget is no more than a political haymaker driven by the pressures of cancel culture. Unfortunately, the targets of this ‘cancelling’ are the brave men and women who selflessly put their lives on the line to keep our families safe. The city council’s action to slash funding disregards the safety of our capital city, its citizens, and the many guests who frequent it. The City of Austin already struggles to combat widespread crime, violence and homelessness. In light of rising violent crime rates in many cities across the country as well the majority of Austinites opposing defunding police, the mayor and the city council should immediately reconsider this ill-advised effort at virtue signaling; which will endanger lives and property in Austin.”

If a Mayor and city council come together to make a conscious decision NOT to provide the core services of a major city — namely, the preservation of law and order — then their own budget will have to go on a diet, too.

Any big-spending liberal can tell you, in a rare moment of honesty, that government spending IS where political power really flexes its might. When they run out of money, they run short of carrots and sticks which to control us.

And now, Austin’s activist city council is getting pressure from both sides.

Predictably, their gutting of the police budget is being criticized by liberals as inadequate.

We used to understand on a national level that you don’t negotiate with terrorists. What makes us think it’s any smarter on a domestic level?

Much of this post was first seen Clash Daily.