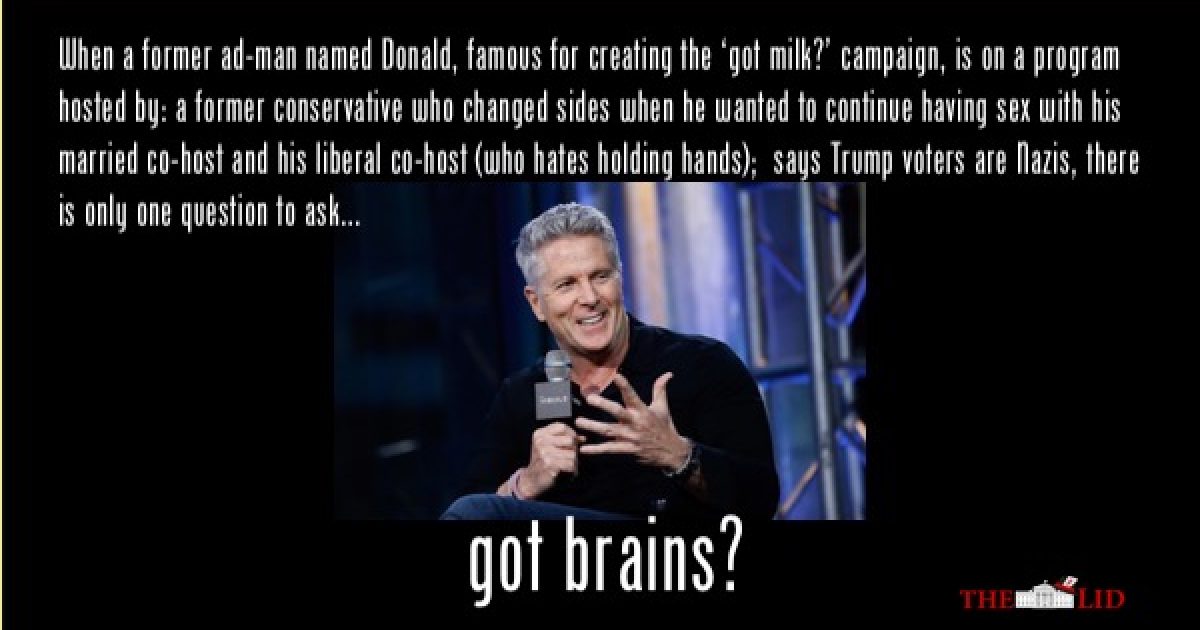 Here we go again. Appearing on Morning Joe  Friday morning Little Donny Deutsch, the retired ad-man who gave us the “Got Milk” campaign demanded that Trump voters be called Nazis.

Of course, by calling Trump voters “Nazis,” Deutsch is essentially giving insane bloodthirsty leftists an excuse to engage in violence and bloodshed.

And for people who are Jewish and voted for President Trump (like me-Jeff) and who has family who suffered at the hands of the Nazis, I am sick and tired of liberals labeling Republicans with fake Shoah references! (Shoah is the word Jews use for the Holocaust it’s Hebrew for disaster).

It seems crazy that a 60-year-old named Donald, a former advertising creative director who relied on words for a living, and now believes himself to be the sexiest hunk who ever lived— appears on a program hosted by:

….no longer has the grasp of the English language to find the words find a reasonable and accurate description of people whose political views are different than his. Instead, he relied on an inappropriate Holocaust reference which was little more than the childish “up your nose with a rubber hose.

Mark Finkelstein noted:  “By proposing that Dems brand Trump supporters ‘Nazis,’ Deutsch turns on its head the notion that politics is about addition, not subtraction.”

“Go ahead, Democrats, make our day!” he added

The reaction was pretty much what one might expect:

This is going to get Americans killed. Totally irresponsible and sickening!

Indeed it is, but it’s precisely the kind of thing Rush Limbaugh was talking about when he said the hysterics from the so-called mainstream media is going to get someone killed.

They are the most hate filled people.

As I’ve repeatedly said since February 2011, liberalism, at its core, is an ideology of rage and hate. Now, it’s become entirely insane and bloodthirsty.

My entire family is offended by this man’s comments. We are a family of veterans and soldiers. I demand an apology. You may direct it to my living family and the graves of my soldiers who have died serving this country so that you can sit on a set and malign is. #shameonyou

“Donald, if you’re watching, we’re from Queens. I’ll meet you in the schoolyard, brother,” he said to the President last June. As we reported at the time, Scarborough tried to bring Deutsch back to planet Earth, but now that Joe is begging his co-host to allow him to hold her hand, he doesn’t have the concentration to control Donny.

In February, little Donny called Trump a “dictator” and advocated revolution to remove him from office.

“Our democracy is under siege,” he said. “People need to start taking to the streets. This is a dictator.”

“This is not something to analyze anymore. This is not ‘Oh, well, good day for Trump.’ This is frightening stuff. If you are an American, if you are somebody who is 80 years old and sitting at home and you’ve watched the greatness of this country, you should be terrified, and if you’re a 12-year-old and the future is in front of you, this is terrifying,” he added.

Here’s a video of his most recent insane comment:

We can’t help but wonder just how far Deutsch’s rhetoric will go, but it’s bound to get a lot worse before it gets any better. We also wonder if Mika will allow Joe to hold her hand and Mika won’t let Joe hold her hand will he leave her and go back to being a conservative?

Exit question: Does Deutsch want a second bloody civil war over Trump?  It sure sounds like it.