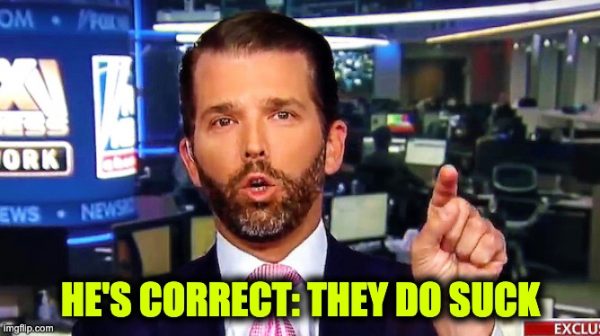 Donald Trump Jr. ripped an MSN article suggesting the president is pushing a deadly drug to fight coronavirus: “You people truly suck!” And he’s 100% correct. The way they wrote the story, people may not take the medicine, incorrectly believing it was dangerous.

What’s your point? 2 grams of caffeine can kill you too, but no one is planning on prescribing that much.

This bullshit is why everyone hates and doesn’t trust the media. They are trying to create fear for clicks with misleading and irrelevant info.

Donald Trump Jr. slammed a news article MSN posted Friday that criticized his father for touting a malaria drug that could potentially slow the spread of the coronavirus because it’s reportedly deadly if administered at a level of more than 2 grams.

The article, published by Bloomberg News with the headline “Virus Drug Touted by Trump, Musk Can Kill In Just Two Grams,” highlighted potential dangers of the decades-old malaria drug chloroquine, which has been linked to some positive findings related to recovery from the coronavirus.

“What’s your point?” Trump Jr. asked on Twitter. “2 grams of caffeine can kill you too, but no one is planning on prescribing that much.”

“This bullshit is why everyone hates and doesn’t trust the media, he added. “They are trying to create fear for clicks with misleading and irrelevant info. You people truly suck!” More

The president has regularly shown optimism that malaria drugs could be used to treat the symptoms of the coronavirus that has killed close to 300 Americans and infected tens of thousands more.

How many doctors test a new indication for a medicine by prescribing 2x the recommended dose?  I would suggest that the answer is none. I guess that MSN and Bloomberg didn’t know that.  Perhaps they never were prescribed medicine before. We know they’ve had the fake news Kool-Aid and this story proves it.

HYDROXYCHLOROQUINE & AZITHROMYCIN, taken together, have a real chance to be one of the biggest game changers in the history of medicine. The FDA has moved mountains – Thank You! Hopefully they will BOTH (H works better with A, International Journal of Antimicrobial Agents)…..

Bayer today announced it is joining the U.S. Government’s fight against #COVID19 with a donation of 3 million tablets of the drug #Resochin (#chloroquine phosphate). New data, while limited, shows potential for the use of Resochin in treating patients with #COVID19 infection.

Very few of the MSM reporters have shown up to the White House Chinese virus briefings for the intended purpose of gaining and passing along information. Most are there for no other reason than to play a deadly game of gotcha and to spread fear among the masses. If America didn’t see the MSM for what it’s become before, they can clearly see it now.